Berkeley Lab scientists have helped to develop a tiny chip that has big potential for quickly determining whether someone has been exposed to dangerous levels of ionizing radiation.

The first-of-its-kind chip has an array of nanosensors that measure the concentrations of proteins that change after radiation exposure.

Although still under development, the technology could lead to a hand-held device that “lights up” if a person needs medical attention in the aftermath of an incident involving radiation. Initial tests on mice found that the technology only requires a drop of blood, measures radiation dose in minutes, and yields results up to seven days after exposure.

The technology was co-developed by scientists from Berkeley Lab and Stanford University, with help from researchers from the Armed Forces Radiobiology Research Institute, UC Davis School of Medicine, and the Methodist Hospital Research Institute’s Center for Biostatistics. The scientists report their research in a paper recently published in the journal Scientific Reports.

“More work is needed, but the chip could lead to a much-needed way to quickly triage people after possible radiation exposure,” says Andy Wyrobek of Berkeley Lab’s Life Sciences Division. He led the multi-institutional team that developed the panel of radiation-sensitive blood proteins.

“The goal is to give medical personnel a way to identify people who require immediate care. They also need to identify the expected much larger number of people who receive a dose that doesn’t require medical attention,” Wyrobek adds. 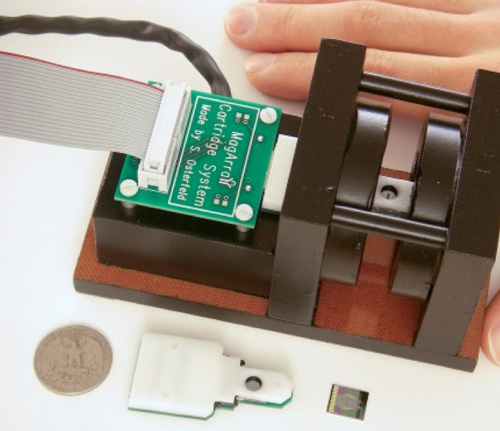 Currently, the most common way to measure radiation exposure is a blood assay called dicentric chromosome assay that tracks chromosomal changes after exposure. Another approach is to watch for the onset of physical symptoms. But these methods take several days to provide results, which is far too late to identify people who’d benefit from immediate treatment.

The new, much faster method comes about thanks to a collaboration between scientists from radiation biology, biostatistics, and engineering disciplines.

Over the past several years, Wyrobek and colleagues in Berkeley Lab’s Life Sciences Division have explored the biochemical signatures of radiation dose. They’ve identified more than 250 proteins that change after exposure. These proteins can serve as biomarkers that indicate whether a person has been exposed to radiation, and by how much. What’s been lacking is a platform that puts these biomarkers to use.

Meanwhile, in the laboratory of Stanford University’s Shan Wang, researchers have pioneered the use of magnetic nanoparticles and giant magnetoresistive sensors for bio-detection. These sensors are coated with molecules that are designed to capture other “target molecules.” The sensors produce electrical signals when the target molecule, followed by a magnetic nanoparticle, attach to it. In this way, a person can detect the presence of nanoscale objects such as proteins — even though the objects are invisible to the naked eye. 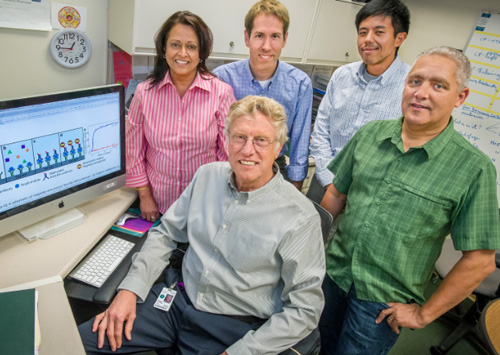 The two groups began working together a couple of years ago. Wyrobek’s team supplied antibodies for two protein biomarkers of radiation exposure. Wang’s team incorporated these antibodies into magneto-nanosensors. They also created a smaller-than-a-penny-sized chip with 64 of these sensors. A shoebox-sized chip reader connects the chip to an electronic circuit board. The chip reader can be linked to a laptop or smartphone for easy readout.

They tested the system using blood from mice that had been exposed to radiation. Here’s how it works: A drop of blood is placed on the chip. The biomarker proteins in the blood attach themselves to an antibody on one of the chip’s 64 magneto-nanosensors. A second step adds detection antibodies and magnetic nanoparticles to each “captured” protein. The sensors recognize the nanoparticles’ presence, and send electronic signals to the circuit board that indicate the number of proteins present.

“You add a drop of blood, wait a few minutes, and get results,” says Wyrobek.

Their proof of principle test matched results obtained via a widely used molecule-detection test called an ELISA assay. It also worked up to seven days after exposure.

“It’s very satisfying to see that the assay, based on magneto-nanosensors, has validated the radiation dose response of the protein markers identified by the Berkeley Lab team,” says Wang.

The scientists next hope to add antibodies for additional proteins to the chip so it can detect the presence of even more biomarkers.

The research was funded primarily by the Department of Health and Human Services’ Biomedical Advanced Research and Development Authority.