Does parenting take a toll on the immune system?

If you’ve ever been the parent of a newborn who demanded to be fed every three to four hours, your gut instinct tells you the answer is an absolute, unequivocal yes.

University of Delaware post-doctoral researcher Ian Stewart is conducting research to answer this question a bit more scientifically. His subjects – tree swallows – make human parents look like slouches. Both the mother and father tree swallow feed their hatchlings every five minutes, 12 hours a day. (It should be noted, though, that their parenting gig is much shorter than ours — after 17 or 18 days the young leave the nest.)

Stewart is studying these small, migratory birds to better understand the trade-offs they make between reproduction and immunity. His research could potentially help scientists who study human biology better understand our own immune system and its stressors.

Stewart is part of a young but growing interdisciplinary field called ecoimmunology, which combines aspects of immunology with ecology, biology, physiology and evolution. He chose to focus his research on tree swallows and bluebirds because both are fairly tolerant of human interaction. “Some birds don’t like being observed but tree swallows and bluebirds don’t get stressed from being watched or handled,” notes Stewart.

There’s another very important benefit to working with these birds — since they nest in boxes, not up in the trees, they’re a heck of lot easier to catch. 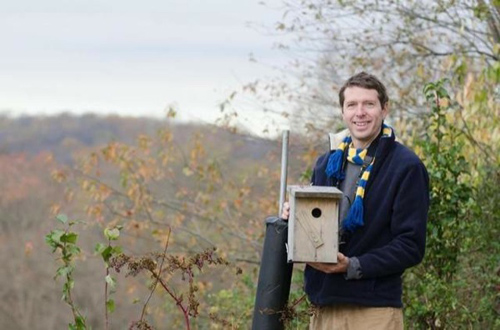 Throughout the breeding season, Stewart catches the parent birds, injects them with a harmless antigen and releases them. Then, he re-catches the same birds a few days later to take blood samples and assess each bird’s immune response to the antigens.

“Some of the tree swallows work harder at parenting,” notes Stewart. “It may be because the bird has four hatchlings to feed instead of just three. Other times, the bird is simply more energetic at taking care of its hatchlings, regardless of brood size.”

“We’re monitoring the reproductive effort of the adults – mostly the rate at which they feed their nestlings – so that we can test whether the adults that are working harder produce weaker immune responses,” he says.

Stewart is conducting his research at Coverdale Farm Preserve, a 352-acre tract in Greenville owned by the Delaware Nature Society. The preserve already had 50 bird boxes in place last spring, when Stewart began his field work, and he installed another 50 boxes.

Now that it’s autumn, Stewart spends most of his time in the lab, crunching the data and performing immune assays on the samples he collected. But earlier this season, he was at the preserve by 7 a.m. every day and after a full day of catching and observing birds, would head to the lab each evening to centrifuge the blood samples for storage.

“Prof. Mike Moore is overseeing my research and I had a grad student, Andrew Hydrusko, assist me, but I worked alone a lot,” he says. “So I enjoyed it when school groups passed by the bird boxes and there was time for them to learn a bit about my bird research. They loved to help catch the birds.”

“Ian’s work is quite interesting,” says Chris Williams, a UD associate professor of wildlife ecology. “One might think that having more offspring would improve your chances of passing off your genes to the next generation. However, if the parent’s health is compromised to make such an effort, natural selection may have something else to say about it. The evolutionary trade-offs between maternal health and maximum number of young ultimately produces optimal clutch sizes.”

So what’s the verdict — do parents shortchange themselves if they devote more resources to their offspring?

Stewart is still analyzing this year’s data and has another year of field research to go. But the preliminary answer, for tree swallows, appears to be yes. As for humans, he will defer to sleep-starved parents of newborns and let them have the final word.