TORONTO, ON – A University of Toronto-led team of anthropologists has found evidence that human ancestors used stone-tipped weapons for hunting 500,000 years ago – 200,000 years earlier than previously thought.

“This changes the way we think about early human adaptations and capacities before the origin of our own species,” says Jayne Wilkins, a PhD candidate in the Department of Anthropology at the University of Toronto and lead author of a new study in Science. “Although both Neandertals and humans used stone-tipped spears, this is the first evidence that the technology originated prior to or near the divergence of these two species,” says Wilkins.

Attaching stone points to spears – known as ‘hafting’ – was an important advance in hunting weaponry for early humans. Hafted tools require more effort and foreplanning to manufacture, but a sharp stone point on the end of a spear can increase its killing power.

Hafted spear tips are common in Stone Age archaeological sites after 300,000 years ago. This new study shows that they were also used in the early Middle Pleistocene, a period associated with Homo heidelbergensis and the last common ancestor of Neandertals and modern humans. 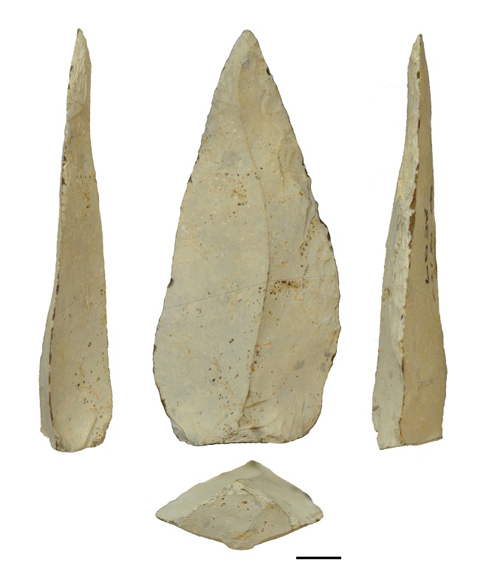 This is a ~500,000-year-old point from Kathu Pan 1. Multiple lines of evidence from a University of Toronto-led study indicate that points from Kathu Pan 1 were used as hafted spear tips. Scale bar = 1 cm. Image credit: Jayne Wilkins

“It now looks like some of the traits that we associate with modern humans and our nearest relatives can be traced further back in our lineage,” Wilkins says.

Wilkins and colleagues from Arizona State University and the University of Cape Town examined 500,000-year-old stone points from the South African archaeological site of Kathu Pan 1 and determined that they had functioned as spear tips.

Point function was determined by comparing wear on the ancient points to damage inflicted on modern experimental points used to spear a springbok carcass target with a calibrated crossbow. This method has been used effectively to study weaponry from more recent contexts in the Middle East and southern Africa. The stone points exhibit certain types of breaks that occur more commonly when they are used to tip spears compared to other uses.

“The archaeological points have damage that is very similar to replica spear points used in our spearing experiment,” says Wilkins. “This type of damage is not easily created through other processes.” 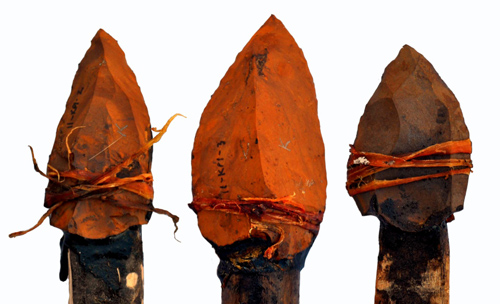 Examples of experimental hafted points from a University of Toronto-led study. Points were hafted to wooden dowels using Acacia resin and sinew and then thrust into a springbok carcass target using a calibrated crossbow. The Kathu Pan 1 archaeological points show a similar pattern of edge damage to these experimental points. Image credit: Jayne Wilkins

The findings are reported in the paper “Evidence for Early Hafted Hunting Technology” published in the November 16, 2012 issue of Science. Other authors contributing to the study are Benjamin Schoville from Arizona State University, Kyle Brown of the University of Cape Town and University of Toronto archaeologist Michael Chazan. Funding for the research was provided by the Social Sciences and Humanities Research Council of Canada, the National Science Foundation and the Hyde Family Foundation. Logistical support came from the South African Heritage Resources Agency and the McGregor Museum, Kimberley, South Africa. 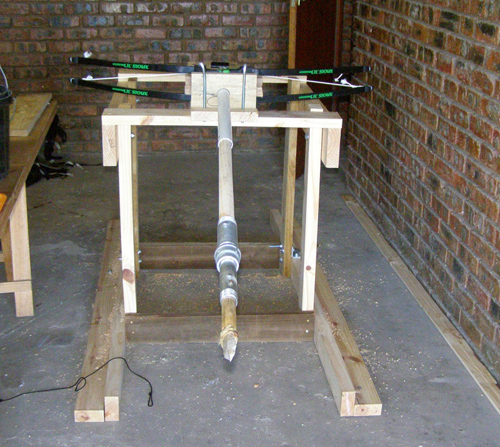 This is a mounted crossbow used for spearing experiments in a University of Toronto-led study that showed that ~500,000-year-old points from Kathu Pan 1 were used as hafted spear tips. Image credit: Benjamin Schoville

The points were recovered during 1979-1982 excavations by Peter Beaumont of the McGregor Museum. In 2010, a team directed by Chazan reported that the point-bearing deposits at Kathu Pan 1 dated to ~500,000 years ago using optically stimulated luminescence and U-series/electron spin resonance methods. The dating analyses were carried out by Naomi Porat, Geological Survey of Israel, and Rainer Grün, Australian National University. 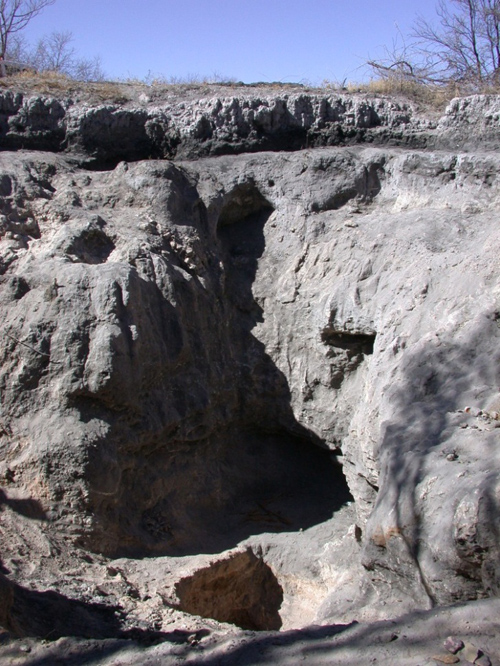