About the video: Ice sheet expert Richard Alley told a UD audience about the past and future of Earth’s changing climate when he spoke as part of the DENIN Dialogue Lecture Series.

Richard Alley, Evan Pugh Professor of Geosciences at Pennsylvania State University, appeared at the University of Delaware’s Mitchell Hall on Nov. 8 to discuss his breakthrough findings about abrupt climate changes in Earth’s past and the implications of his research for Earth’s future.

In the fifth installment of the Delaware Environmental Institute’s DENIN Dialogue Lecture Series, Alley was interviewed on stage in front of a live audience by UD associate professor and environmental historian Adam Rome. Alley gave a detailed but non-technical explanation of his research and discussed why his findings were significant.

“The fact that a lot of things changed very rapidly was really a surprise, and it’s the thing that makes you uncomfortable about pushing really hard on the climate,” he said.

Alley explained why ice cores taken in Greenland were a good indicator of the Earth’s climate patterns at different points in history.

“Ice cores are an archive,” he said. “They have a record of how much it snowed and what the weather was like in Greenland, but they also have a record of what was blown in by the wind from different parts of the world.

“In one place, you have a record of a good chunk of the world, and there’s no uncertainty in the time,” he added. “It told us that most of the world had changed together really, really fast.”

Alley said these findings led researchers to investigate whether such rapid changes could occur again in our future and also shed light on the possibility of unpredictable changes in Earth’s climate.

“Most of the time the Earth behaves itself,” he said. “But it’s clear the Earth does have switches. If you push lightly on a switch, nothing happens, but if you push a little harder, then it changes suddenly. The problem for scientists is that it’s difficult to predict how hard you have to push on the switch to flip it.”

Alley also spoke about the lessons history has for researchers seeking to understand current and future environmental climate conditions and their implications.

“History is valuable,” he said. “It shows us that we have faced and solved these types of problems before.” 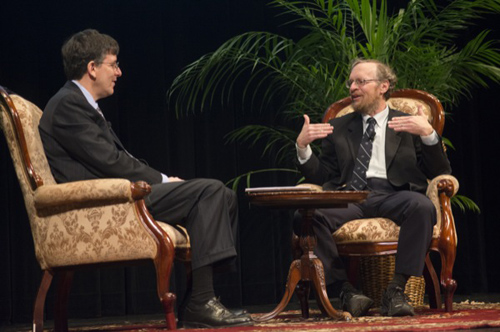 Alley addressed the challenges that climate scientists face in communicating their findings with the general public. He said many people form opinions and make assumptions that diminish scientists’ credibility.

“People make assumptions when I say I’m a climate scientist,” he said.

Alley said that it is important for the right people to come to forefront of the movement and raise public awareness. Alley referred to Earth: The Operator’s Manual, a PBS miniseries he hosted, which included Rear Admiral David W. Titley as a climate authority.

“People might tune me out, but they might listen to Admiral Titley,” he said. “But some people will even tune Admiral Titley out.”

Alley also discussed the potential benefits that finding sources of sustainable power could have in people’s lives.

“The potential is there to get a better economy with more power for more people in the world and with more jobs and greater national security and a cleaner environment,” he said.

Alley reminded the audience that the climate isn’t just an environmental issue; it’s a human issue.

“The biggest losers in this are poor people in hot places and people who haven’t been born yet,” he said.