Scientists study jets to learn more about the extreme environments around black holes. Much has been learned about the material feeding black holes, called accretion disks, and the jets themselves, through studies using X-rays, gamma rays and radio waves. But key measurements of the brightest part of the jets, located at their bases, have been difficult despite decades of work. WISE is offering a new window into this missing link through its infrared observations.

“Imagine what it would be like if our sun were to undergo sudden, random bursts, becoming three times brighter in a matter of hours and then fading back again. That’s the kind of fury we observed in this jet,” said Poshak Gandhi, a scientist with the Japan Aerospace Exploration Agency (JAXA). He is the lead author of a new study on the results appearing in the Astrophysical Journal Letters. “With WISE’s infrared vision, we were able to zoom in on the inner regions near the base of the stellar-mass black hole’s jet for the first time and observe the physics of jets in action.” 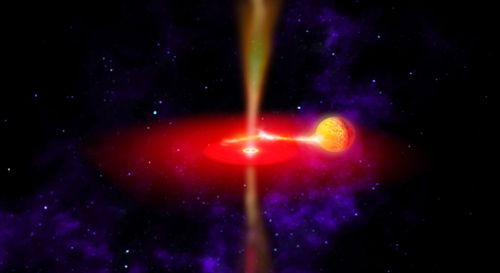 This artist's concept illustrates what the flaring black hole called GX 339-4 might look like. Infrared observations from NASA's Wide-field Infrared Survey Explorer (WISE) reveal the best information yet on the chaotic and extreme environments of this black hole's jets. Image credit: NASA

The black hole, called GX 339-4, had been observed previously. It lies more than 20,000 light-years away from Earth near the center of our galaxy. It has a mass at least six times greater than the sun. Like other black holes, it is an ultra-dense collection of matter, with gravity that is so great even light cannot escape. In this case, the black hole is orbited by a companion star that feeds it. Most of the material from the companion star is pulled into the black hole, but some of it is blasted away as a jet flowing at nearly the speed of light.

“To see bright flaring activity from a black hole, you need to be looking at the right place at the right time,” said Peter Eisenhardt, the project scientist for WISE at NASA’s Jet Propulsion Laboratory in Pasadena, Calif. “WISE snapped sensitive infrared pictures every 11 seconds for a year, covering the whole sky, allowing it to catch this rare event.”

Observing the jet’s variability was possible because of images taken of the same patch of sky over time, a feature of NEOWISE, the asteroid-hunting portion of the WISE mission. WISE data enabled the team to zoom in on the very compact region around the base of the jet streaming from the black hole. The size of the region is equivalent to the width of a dime seen at the distance of our sun.

The results surprised the team, showing huge and erratic fluctuations in the jet activity on timescales ranging from 11 seconds to a few hours. The observations are like a dance of infrared colors and show that the size of the jet’s base varies. Its radius is approximately 15,000 miles (24,140 kilometers), with dramatic changes by as large as a factor of 10 or more.

“If you think of the black hole’s jet as a firehose, then it’s as if we’ve discovered the flow is intermittent and the hose itself is varying wildly in size,” Poshak said.

The new data also allowed astronomers to make the best measurements yet of the black hole’s magnetic field, which is 30,000 times more powerful than the one generated by Earth at its surface. Such a strong field is required for accelerating and channeling the flow of matter into a narrow jet. The WISE data are bringing astronomers closer than ever to understanding how this exotic phenomenon works.

A video showing variations of the black hole jet, as seen via WISE observations, is online at https://www.astro.isas.jaxa.jp/~pgandhi/wise_gx339/wise_blackhole_anim.html .

JPL manages and operated WISE for NASA’s Science Mission Directorate in Washington. The spacecraft was put into hibernation mode after it scanned the sky twice, completing its main objectives. The mission was selected under NASA’s Explorers Program, which is managed by the agency’s Goddard Space Flight Center in Greenbelt, Md. The science instrument was built by the Space Dynamics Laboratory in Logan, Utah; and the spacecraft was built by Ball Aerospace and Technologies Corp., in Boulder, Colo. Science operations and data processing take place at the Infrared Processing and Analysis Center at the California Institute of Technology in Pasadena. More information is online at https://www.nasa.gov/wise and https://wise.astro.ucla.edu and https://jpl.nasa.gov/wise .