The high-resolution NASA snow maps of the Tuolumne River Basin in the Sierra Nevada helped optimize reservoir filling and hydroelectric generation at the Hetch Hetchy reservoir and its O’Shaughnessy Dam. This resulted in a full reservoir at the end of the snowmelt season, no water spillage, and generation of more than $3.9 million in hydropower. The NASA data helped optimize operations during the last two critical weeks of runoff.

At a media briefing today at the American Geophysical Union meeting in San Francisco, scientists from NASA; the University of Washington, Seattle; and McGurk Hydrologic Associates, Orinda, Calif., discussed the observatory’s first year of operations in California and the Uncompahgre watershed in Colorado’s Upper Colorado River Basin. The three-year demonstration mission is a collaboration between NASA’s Jet Propulsion Laboratory, Pasadena, Calif., and the California Department of Water Resources in Sacramento.

“For the first time, Airborne Snow Observatory data are telling us the total water in the snowpack in the watershed and the absorption of sunlight that control its melt speed, enabling us to estimate how much water will flow out of a basin when the snow melts,” said Tom Painter, observatory principal investigator at JPL. “By combining near-real-time information on the total amount of water in the snowpack with observations of water inflow to Hetch Hetchy reservoir between April and July, we were able to greatly improve the model we developed to predict inflow into the reservoir.” 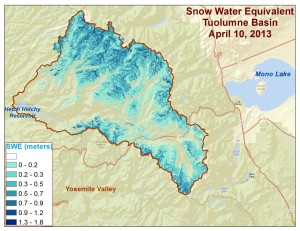 He noted that the improved snowpack measurements and more efficient reservoir operations are vital in the face of continued climate change, larger weather uncertainties, California’s continuing severe drought and increasing demand for water.

Flying aboard a Twin Otter aircraft, the Airborne Snow Observatory measures two properties most critical to understanding snowmelt runoff and timing: snow depth and snow reflectivity. By combining snow depth with estimated density, snow water equivalent — the amount of water in the snow — is derived and used to calculate the amount of water that will run off. Snow reflectivity, or albedo, is the fraction of the incoming amount of sunlight reflected by snow. Subtracting reflected sunlight from incoming sunlight gives the absorbed sunlight, which largely controls the speed of snowmelt and timing of its runoff.

Before now, Tuolumne River Basin runoff forecasts could only be made using monthly manual ground snow surveys and daily automated measurement devices called snow pillows at sparsely located sites in lower to middle elevations. As those sites melt free of snow in early spring, an unknown amount of snow remains at higher elevations. The total area of the basin measured at all of these survey sites is only about 270 square feet (25 square meters). The observatory measured all the snow in the basin over an area 46 million times larger: 460 square miles (1,140 square kilometers).

The observatory mapped the basin weekly from early April through early June. Over 65 days, it measured the decline in water volume as the Hetch Hetchy basin snowpack melted, shrinking from 218.1 thousand acre-feet (71.06 billion gallons) to 15.2 thousand acre-feet (4.94 billion gallons). An acre-foot is the amount of water needed to cover an acre of land to a depth of one foot, or 325,851 gallons. For comparison, the average family of four uses about an acre-foot per year.

Every day in summer, 290 million gallons, or 870 acre-feet, come out of Hetch Hetchy and travel 150 miles (241 kilometers) to the San Francisco Peninsula, providing all or some of the water for 2.6 million customers. When full, the 8-mile-long (13-kilometer) reservoir holds 360.4 thousand acre-feet. The reservoir’s water level is typically lowered about a third of the way (about 120 feet, or 37 meters) every summer.

In early June, a modeling forecast of predicted water inflow to the reservoir that had been corrected using Airborne Snow Observatory data was used to supplement the City of San Francisco’s Hetch Hetchy Water & Power managers’ existing models as they topped off the reservoir. Hydrologist Bruce McGurk of McGurk Hydrologic, Orinda, Calif., provided the results from a daily forecasting model he built to use with observatory results. Without the observatory data, his model over-predicted by 32,000 acre-feet the amount of water that would flow into the reservoir. Had all that water been used to generate power, it would have drafted the reservoir down 16 feet (4.9 meters) – water supplies that would not have been available to the thirsty city this summer. “The Airborne Snow Observatory provides information on snow depth and water quantity at weekly intervals that water managers have never had before, but have always wanted,” McGurk said.

Beyond its water management applications, Associate Professor Jessica Lundquist of the University of Washington, Seattle, said the observatory data are game-changing in providing useful snow information for snow hydrology, climate sciences, glaciology and ecosystem studies. “Snow controls high-elevation streamflow and ecosystems, but we’ve historically had to guess how much snow fell and where it was stored,” Lundquist said. “With these data, we can improve how we model mountain systems and predictions of how those systems will change in time. It’s pretty amazing that we can both forecast for Hetch Hetchy and also drill down to one small basin affecting a meadow and see details that match photos taken on the ground. To me, the Airborne Snow Observatory snow maps are cooler than pictures from Mars.”

“The Airborne Snow Observatory is an innovative use of NASA advanced sensor research applied to one of the top challenges our nation and our planet face: freshwater management and practical water management information needs,” said Brad Doorn, program manager in Applied Sciences at NASA Headquarters in Washington. “The observatory is also advancing our scientific understanding of Earth processes and how we can better monitor them in the future, from both air and space.”

JPL is a division of the California Institute of Technology in Pasadena. For more information on the Airborne Snow Observatory, visit: https://aso.jpl.nasa.gov/ .