Creative classroom: In ‘books of secrets,’ historian’s students find an unexpected past

One afternoon Nell Meosky ’14 was sitting at a table in the Beinecke Rare Book and Manuscript Library with her classmates in the undergraduate seminar “Spies, Secrets, and Science.” She eagerly began to leaf through pages of a late medieval text, when an exclamation of “Wait!” by her professor, Paola Bertucci, made her take pause.

The text, Bertucci explained to her students, was the famous Voynich manuscript, an illustrated codex penned in an unknown writing system that has baffled scholars and fired the imaginations of people around the world. Carbon-dated to the early 15th century, the manuscript was acquired by the Beinecke Library in 1969, and Bertucci wanted her students to know that what they were seeing — and touching — is a rare treasure.

Albeit the most well known, the Voynich manuscript was just one of many historical texts that Bertucci’s students had the opportunity to hold in their hands this semester.

“Spies, Secrets, and Science” explores the relationship between secrecy and knowledge from antiquity to the Cold War, and the course this semester featured an unusual component: As part of their midterm assignment, the students collaborated on curating an exhibition. The result, “Books of Secrets: Alchemy, Medicine, and Magic,” is now on view in the rotunda of the Harvey Cushing/John Hay Whitney Medical Library. It is the first exhibit from the collections of the Medical Historical Library — at least in recent memory — curated by an undergraduate class. 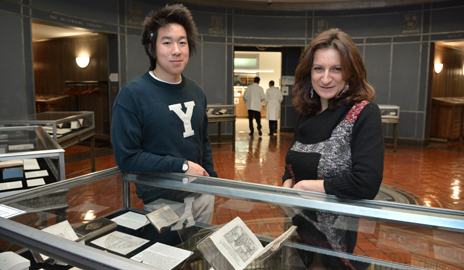 Professor Paola Bertucci and Cyrus Nguyen ’15 at the exhibit “Books of Secrets: Alchemy, Medicine, and Magic” that her students curated as part of their midterm assignment for her seminar. (Photo by Michael Marsland)

As part of her class, Bertucci took her students to the Beinecke and to the Cushing Center in the Medical Historical Library, where they were introduced to so-called “books of secrets,” publications from the 16th to 18th centuries that divulged medicinal, alchemical, astrological, artisanal, and other kinds of “secrets” of nature and the arts. Most of these texts, Bertucci explains, were cheap publications — some even compiled by fictitious authors — including how-to manuals offering recipes for healing, cosmetics, personal hygiene, fertility or infertility treatments, and more, which were widely popular with the public in their time.

“I wanted the students to be confident by the time of the mid-term project that they could work with these elusive ‘books of secrets’ published mostly in the 16th and 17th centuries,” says Bertucci, assistant professor of history, whose seminar is offered as a course in three departments: history of science/history of medicine, history, and humanities. “I wanted them to feel they could say something about these books, to not feel scared by the cultural remoteness of them.”

Bertucci adds that she also wanted the students to be aware of the vast resources available to them via Yale’s library collections.

“Students can graduate without knowing that Yale has these amazing collections,” she says. “Working firsthand on these historical materials really makes a difference for them. They can’t do that online; they can’t do that at home; they can’t see what they saw anywhere but here. And I hope that they don’t take that for granted.” 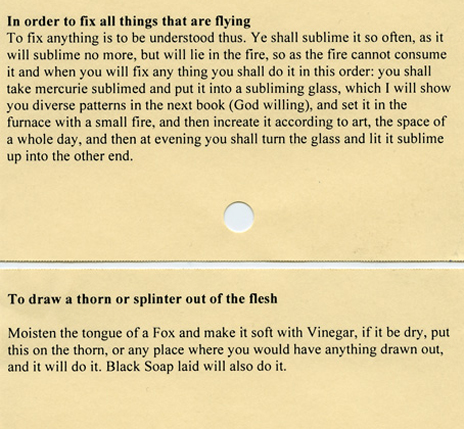 The top secret comes from “A Rich Closet of Physical Secrets … by a late English Doctor” (1652) and the bottom secret is from John Hester’s “A Storehouse of Physicall and Philosophicalll Secrets” (1593). Both books were published in London. Image credit: Yale University

During their visits to library collections, Bertucci said, many of her students were surprised by what they learned about the “secrets” they read in the primary source materials.

“My students remarked that — before looking at these ‘books of secrets’ in the Cushing Center — they imagined some mystery, some process of enlightenment that would happen in the process of reading them. The term ‘books of secrets’ seemed to promise this kind of initiation into this esoteric or elusive knowledge.

“Instead, they found cheap booklets that dealt with food or some process of healing or dying your hair, or how to make talismans and amulets, for example,” she continues. “They appreciated that books are artifacts. Sometimes there were stains on the books from people who tried to make the recipes within them. I loved the discussions that followed in class when they talked about their expectations versus the reality.”

Bertucci says she conceived the idea of creating an exhibition as a midterm project because she wanted to fully engage her students in some of the texts they were discussing. At the Medical Historical Library, they were treated to an examination of about 40 historical “books of secrets.”

“The course was challenging to teach in a very nice way,” says Bertucci, whose own scholarly work specializes on pre-1800 history of science and medicine. “I wanted to interest the students in early periods and to show them that there is a lot to be learned, even for people who are more interested in contemporary history.”

“Often we imagine that science has always been the way we know it, only less developed, quantitatively less sophisticated, but when we look at how Europeans studied the natural world only three or four centuries ago, it’s like landing on a different planet,” notes Bertucci. “I love it when my students discover a past that is now so strange to us, yet it is our own. I think it is really important to understand how we got to this point, to believing what we believe.

“Yale students,” she adds, “are committed to going out into the world to make a difference, but how can you learn how to approach a different culture if you are foreign to your own? You need to learn first where your systems of beliefs came from.”

That voyage into the past was indeed an enlightening experience for the undergraduates in “Spies, Secrets, and Science.” As part of their midterm, each student studied three historical texts from the Medical Historical Library and wrote about them; the students’ selected texts were then featured in the exhibition with their own descriptions of the books. Bertucci arranged the eight exhibition cases into the themes that emerged from the students’ work: “The Secrets of Alchemy,” “Esoteric and Alchemical Healing,” “The Professors of Secrets,” “Closets of Secrets,” “Secrets of Sex and Generation,” “Astrological Medicine,” “Cosmetics and Pharmacy,” and “Natural Magic.”

For his exhibition project, Spencer Weinreich ’15 chose an alchemical tract attributed to Nicholas Flamel (who also crops up as a literary figure in the Harry Potter series); a “natural magic” text that explores how — by combining human ingenuity and knowledge of nature’s secrets — one can create flames that burn underwater, or statues that sing, for example; and a 17th-century cookbook.

“Working with the libraries was rather a trip through the looking-glass,” says Weinreich. “For once, instead of feeling one has been permitted to merely look at a precious object, we were in the thick of it. The respect accorded us by the staff of the Medical Historical Library was extremely gratifying.”

Stewart Palmer, a 67-year-old who has returned to Yale as a readmitted undergraduate, studied three sources on astrological medicine. He says that a summer session course he took on the history of the book gave him “good background” for working with the 16th- and 17th-century books at the Medical Historical Library.

“Dealing with books of that age was sort of like returning to old friends,” he says. “I was astonished at the extent of the rare book collection at the Medical Historical Library. The librarian, Melissa Grafe, says that there are 140,000 volumes in the collection. I am awed by the depth and breadth of the aggregate collection of all of the libraries at Yale.”

Palmer says that Bertucci’s seminar taught him to think “more like a historian,” while Cyrus Nguyen ’15 reports that he gained confidence in his historical writing skills. For Weinreich, the course inspired him to ponder further the power of secrets.

“We spend a great deal of time thinking about knowledge — what we know, how our knowledge shapes the ways we interact with the world,” Weinreich says. “Professor Bertucci’s course forced me to grapple with questions about the lack of knowledge: What does it mean not to know something? What is the power of holding a secret? Or publishing a secret?”

A highlight of the seminar for many students was seeing their individual projects presented together in a thematic fashion in the Medical Historical Library exhibit.

“Most striking to me was the first few moments of walking around the rotunda of the medical library, seeing the completed exhibit for the first time,” comments Weinreich. “Until that point, we had been working in isolation, each of us poring over our own books and writing our own papers. Looking at those cases, though, and seeing how beautifully each book spoke to its neighbors in the case, and to the cases around the room, it was extraordinary to realize how connected all of our work had been.”

Bertucci says she is immensely proud of her students’ individual work and is impressed by the beauty of the student-curated exhibit. She is also gratified that some of the mystery of the seminar itself — which drew 100 applications for only 15 spots — has been replaced by an even deeper interest in the subjects it examines.

“I think students are intrigued by the notions of spying and of secrecy,” she says. “Then, when we study these topics as we did in the context of my seminar, they lose their mystery, yet they gain another kind of appeal. What the students discovered — that these ‘books of secrets’ were often about recipes and not mystical revelation, that they were dirty, worn, and not particularly visually attractive — created new mysteries for them: Why were they so popular? What were people looking for when they bought them? Why are secrets so appealing?”

“Books of Secrets: Alchemy, Medicine, and Magic,” is on view at the Cushing/Whitney Medical Library through Jan. 17. Students are also contributing entries about their work for the exhibition on the library’s blog.