It’s shaping up to be a fiery summer across the United States. According to the National Interagency Fire Center, as of July 3, 45 large active wildfires are currently burning in 15 states. Combined, these fires have scorched nearly three-quarters of a million acres. Since January 1, wildfires have burned nearly 2.2 million acres across the country, including devastating blazes in Colorado and New Mexico. We asked JPL Climatologist Bill Patzert to discuss the recent wildfire outbreak and whether climate change is playing a role.

Q: The U.S. wildfire season is off to an active start. What factors have contributed to the recent rash of blazes?

Patzert: Across the West, out-of-control wildfires this summer have left a heartbreaking path of destruction. The primary condition that triggered these fires was an unusually dry and warm La Nina winter and spring. These conditions primed the Western U.S. for an incendiary summer. The arrival of a persistent, scorching high-pressure system over the Western and Central U.S. just exacerbated already dangerous conditions, which reached a tipping point when strong, gusty winds sent these fires rampaging across the landscape. From New Mexico to Colorado and many other states, out-of-control wildfires are still burning through forests, grasslands and destroying neighborhoods.

Q: We have wildfires in the U.S. every year, yet in the past couple of years in particular they’ve been especially destructive. Has something changed?

Patzert: In the West, these great fires have written our history. For those of us in Southern California, the memories and scars from the 2009 Station fire, which leveled more than 200 square miles [518 square kilometers] in Los Angeles County, are still fresh. A decade before this year’s devastating fires in Colorado, they had the 2002 Hayman fire, the largest in Colorado’s recent history. But what’s really changed in recent years is that there are more and more people building and living at the urban/wildland interface, so the human impact is greater every time these great fires erupt. 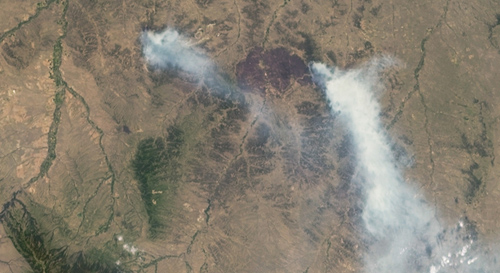 While much of the national focus in the early summer of 2012 has been on the destructive wildfires in Colorado, as of July 3, 2012, dozens of major wildfires were burning across the western United States, including six in Montana alone, according to the interagency fire incident information system, InciWeb. On July 2, 2012, the Multi-angle Imaging SpectroRadiometer (MISR) instrument on NASA's Terra spacecraft passed over the Horse Creek Fire and much larger Ash Creek Fire Complex in southeastern Montana, to the east of Billings. Image credit: NASA/GSFC/LaRC/JPL, MISR Team

Q: Many people are trying to link these recent wildfires to climate change. What’s your take on that?

Patzert: There is concern that climate change is somewhat to blame for these great western fires. Are rising temperatures and shifts in rainfall and snowfall patterns anticipated from human-induced climate change happening? Absolutely, but it’s important to remember that natural shifts in our climate have and will continue to give us a wild ride. In the West, drought, heat waves and great fires are our history. Looking to the future, the uncertainties of human-influenced climate change will play a stronger and stronger role, and rewrite our fiery history.