Scientists have for the first time watched and manipulated stem cells as they regenerate tissue in an uninjured mammal, Yale researchers report July 1 online in the journal Nature.

Using a sophisticated imaging technique, the researchers also demonstrated that mice lacking a certain type of cell do not regrow hair. The same technique could shed light on how stem cells interact with other cells and trigger repairs in a variety of other organs, including lung and heart tissue.

“This tells us a lot about how the tissue regeneration process works,” said Valentina Greco, assistant professor of genetics and of dermatology at the Yale Stem Cell Center, researcher for the Yale Cancer Center and senior author of the study.

Greco and her team focused on stem cell behavior in the hair follicle of the mouse. The accessibility of the hair follicle allowed real-time and non-invasive imaging through a technology called 2-photon intravital microscopy. 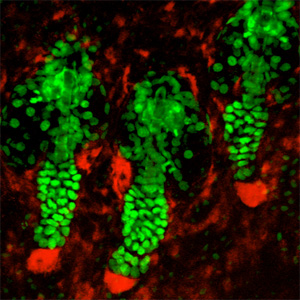 Yale researchers captured these images of hair follicles of a mouse, with nuclei of epithelial cells stained in green and mesenchymal cells, which are active in early development, in red. Yale scientists found that mesenchymal cells were crucial to hair growth. (Image courtesy of Dr. Pantelis Rompolas, Greco Lab, Yale School of Medicine)

Using this method, Panteleimon Rompolas, a post-doctoral fellow in Greco’s lab and lead author of this paper, was able to study the interaction between stem cells and their progeny, which produce all the different types of cells in the tissue. The interaction of these cells with the immediate environment determines how cells divide, where they migrate and which specialized cells they become.

The technology allowed the team to discover that hair growth in mice cannot take place in the absence of connective tissue called mesenchyme, which appears early in embryonic development.

Stem cells not only spur growth of hair in mammals including humans, but also can serve to regenerate many other types of tissues.

“Understanding how stem cell behavior is regulated by the microenvironment can advance our use of stem cells for therapeutic purposes and uncover mechanisms that go wrong in cancer and other diseases,” Greco said.

The study was funded by an Alexander Brown Coxe postdoctoral fellowship. This work was supported in part by the American Skin Association and the American Cancer Society and the Yale Rheumatologic Disease Research Core Center and the National Institutes of Health.