Fresh on the heels of a series of crippling floods that began in December 2010, and a small tropical cyclone, Anthony, this past weekend, the northeastern Australian state of Queensland is now bracing for what could become one of the largest tropical cyclones the state has ever seen.

The Atmospheric Infrared Sounder (AIRS) instrument on NASA’s Aqua satellite, built and managed by NASA’s Jet Propulsion Laboratory, Pasadena, Calif., captured this infrared image of Yasi on Jan. 31, 2011, at 6:29 a.m. PST (9:29 a.m. EST). The AIRS data create an accurate 3-D map of atmospheric temperature, water vapor and clouds, data that are useful to forecasters. The image shows the temperature of Yasi’s cloud tops or the surface of Earth in cloud-free regions. The coldest cloud-top temperatures appear in purple, indicating towering cold clouds and heavy precipitation. The infrared signal of AIRS does not penetrate through clouds. Where there are no clouds, AIRS reads the infrared signal from the surface of the ocean waters, revealing warmer temperatures in orange and red. 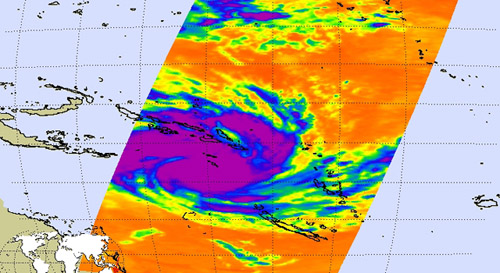 At the approximate time this image was taken, Yasi had maximum sustained winds near 90 knots (166 kilometers per hour, or 103 mph), equivalent to a Category Two hurricane on the Saffir-Simpson Scale. It was centered about 1,400 kilometers (875 miles) east of Cairns, Australia, moving west at about 19 knots per hour (35 kilometers per hour, or 22 mph). Cyclone-force winds extend out to 48 kilometers (30 miles) from the center.

Yasi is forecast to move west, then southwestward, into an area of low vertical wind shear (strong wind shear can weaken a storm). Forecasters at the Joint Typhoon Warning Center expect Yasi to continue to strengthen over the next 36 hours. The Center forecasts a landfall just south of Cairns as a large 100-plus knot-per-hour (185 kilometers per hour, or 115 mph) system by around midnight local time on Wednesday, Feb. 2.