A new study by a Cambridge University criminologist reveals just how dangerous it was to be a monarch in Europe before the modern era.

On 30 January 1649 Charles I was executed on a balcony overlooking Whitehall in central London. A huge crowd, restrained by ranks of militia, gathered to witness his beheading. An eye witness reported that his severed head was thrown down and his hair cut off while soldiers dipped their swords in his blood.

As a royal meeting a ghastly fate, Charles I was far from alone. The astonishing number of European kings who met a violent end has been documented for the first time by a Cambridge University criminologist. Professor Manuel Eisner’s study reveals just how risky it was to be a monarch in an era when murdering those who stood in your way was a fast lane to power. 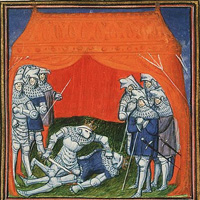 Killing Kings, a paper that will appear on the website of the British Journal of Criminology on Monday 31 January, is a statistical study of the demise of 1,513 monarchs in 45 European monarchies over the period 600 to 1800. It reveals that almost a quarter (22 per cent) of all royal deaths were bloody – accidents, battle deaths and killings – and that 15 per cent of all deaths were outright murder.

“The toll of 15 per cent corresponds to an average rate of 10 murders for every 1000 years of life as a monarch – far higher than the homicide rate for even the most troubled areas of the world today. This rate is higher than the threshold for ‘major combat’ among soldiers engaged in a contemporary war. It demonstrates the intense violent rivalry for domination among historical European political elites,” said Eisner.

As a criminologist, Eisner divides his gruesome statistics for kingly killings into four broad scenarios. Top of the list is murder as a means of succession: at a stroke the reigning monarch is removed from power and a rival enthroned. In 969, for example, the Byzantine Emperor Nikephoros II was slain in his bedroom by his wife Theophano and his chief general, John Tzimiskes. John was crowned as emperor after agreeing to do penance for murder and to separate from his lover.

Next up is murder by a neighbouring ruler and competitor, attempting to gain territory or seal a military victory. In 1362, the Sultan of Granada, Muhammed VI, was invited to attend peace talks with the King of Castile and murdered treacherously near Seville on the orders of Peter I of Castile.

Personal grievance and revenge, fuelled by rape, murder or insult committed by the ruler, rank third as scenarios. Albert I of Germany was assassinated in 1308 by his nephew Johann of Swabia and others while riding home from a banquet at which he had publicly insulted Johann.

Bringing up the rear is the outsider killing. In 1172 the Venetian Doge Vitale Michel II was stabbed to death by a member of a member of an angry mob. In 1354 Yusuf I of Granada was killed by a maniac while praying in the mosque.

Young monarchs – whose grip on the reins of power was tenuous – were especially liable to having their lives cut brutally short. Most poignant are the presumed murders of young Prince Edward V and his younger brother Richard in the Tower of London. In some cases, murder begat murder in relentless waves of killings. Murder hot spots cropped up in some unlikely cold climates – among them Norway and Northumbria.

Eisner suggests that the murder of monarchs provides a window into the dynamics of elite violence across more than a thousand years of European history. If removing a monarch promised important benefits, and opportunities arose, assassination was seen by political elites as a swift route to regime change.

European regicides were most frequent in the Early Middle Ages and became gradually less common over the centuries. Eisner suggests that, as legislative systems strengthened their hold on the division and transfer of power, murder lost its appeal as a strategic tool. On top of this, the doctrine of the divine right of kings, which gathered credence from James I onwards, meant that kings enjoyed almost godly status and an act of deposition was sacrilegious.

“After the 16th century it became very uncommon to organise power transfer through the murder of a monarch. If it did occur, it required extensive legal justification such as in the criminal trial of Charles I in 1649 which eventually led to his execution,” says Eisner. “As for regicides motivated by ideology and radicalism, they have continued right into the early 20th century.”