For Earth Day this year, NASA invited people around the world to step outside to take a “selfie” and share it with the world on social media. NASA released Thursday a new view of our home planet created entirely from those photos.

The “Global Selfie” mosaic was built using more than 36,000 individual photographs drawn from the more than 50,000 images tagged #GlobalSelfie and posted on or around Earth Day, April 22, on Twitter, Instagram, Facebook, Google+ and Flickr. The project was designed to encourage environmental awareness and recognize the agency’s ongoing work to protect our home planet.

Selfies were posted by people on every continent and 113 countries and regions, from Antarctica to Yemen, Greenland to Guatemala, and Pakistan to Peru. The resulting global mosaic is a zoomable 3.2-gigapixel image that users can scan and explore to look at individual photos. The Global Selfie was assembled after several weeks of collecting and curating the submitted images. 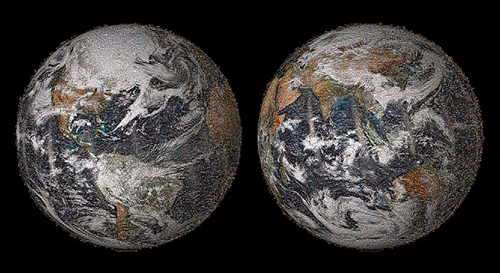 A low-resolution preview of the 3.2-billion-pixel sized NASA Earth Day Global Selfie 2014 photo mosaic. The image is comprised of more than 36,000 individual photos submitted by people around the world. Image credit: NASA/JPL-Caltech/NOAA

“With the Global Selfie, NASA used crowd-sourced digital imagery to illustrate a different aspect of Earth than has been measured from satellites for decades: a mosaic of faces from around the globe,” said Peg Luce, deputy director of the Earth Science Division in the Science Mission Directorate at NASA Headquarters, Washington. “We were overwhelmed to see people participate from so many countries. We’re very grateful that people took the time to celebrate our home planet together, and we look forward to everyone doing their part to be good stewards of our precious Earth.”

The GigaPan image of Earth is based on views of each hemisphere captured on Earth Day 2014 by the Visible Infrared Imaging Radiometer Suite instrument on the Suomi National Polar-orbiting Partnership (NPP) satellite. Suomi NPP, a joint mission between NASA and the National Oceanic and Atmospheric Administration, collects data on both long-term climate change and short-term weather conditions.

The Global Selfie mosaic and related images and videos are available at: 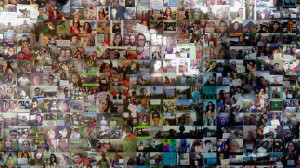 The Global Selfie is part of a special year for NASA Earth science. For the first time in more than a decade, five NASA Earth Science missions are scheduled to launch in one year. The Global Precipitation Measurement Core Observatory, a joint mission with the Japan Aerospace Exploration Agency, was launched in February. The Orbiting Carbon Observatory-2 is set to launch in July, with the Soil Moisture Active Passive mission to follow in November. And two Earth science instruments — RapidScat and the Cloud-Aerosol Transport System — will be launched to the International Space Station.

NASA missions have helped identify thousands of new planets across the universe in recent years, but the space agency studies no planet more closely than our own. With 17 Earth-observing satellites in orbit and ambitious airborne and ground-based observation campaigns, NASA produces data that help scientists get a clearer picture of Earth’s interconnected natural systems. The agency shares this unique knowledge with the global community and works with institutions in the United States and around the world that contribute to understanding and protecting our home planet.