By hightailing it to nearby ponds and shallow waterways, frogs and salamanders have – until now – had a way to evade exotic trout introduced to the West’s high-mountain lakes for recreational fishing.

A warming climate, however, will dry up some of the places where amphibians and their young have found refuge. Researchers in the May 1 issue of Frontiers in Ecology and the Environment write about this challenge and a novel combination of tools that could help land managers, biologists, fishing enthusiasts and other citizens weigh where amphibians are in the most need of help and guide plans for possible fish removals from selected lakes.

“Amphibians in the West’s high-mountain areas find themselves in a vise, caught between climate-induced habitat loss and predation from introduced fish,” said Maureen Ryan, a University of Washington postdoctoral researcher in environmental and forest sciences, a Simon Fraser University research associate and lead author of the paper. 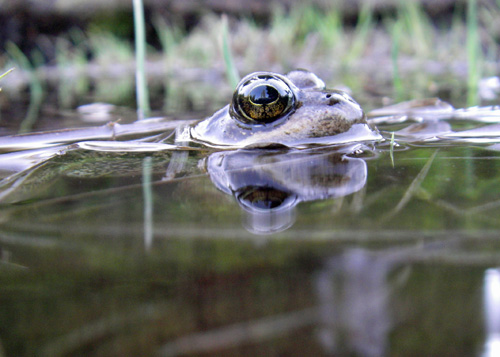 Cascades frogs, found only at high elevations in three states, will face a hard future where trout dominate high mountain lakes and climate change dries up many of the shallower waterways such amphibians have been using. Image credit: M Ryan/U of Washington

Among the tools that could prove useful is a hydrologic model, currently used to project river flows, that can be applied to wetlands as a way to evaluate the effects of projected climate change. New remote-sensing techniques, using what’s called object-based image analysis, allow managers to use existing aerial and satellite imagery to map wetlands in remote and previously un-surveyed regions.

Along with biological survey data these tools “can be used to identify regions where native wetland animals are most at risk of the combined effects of climate change and fish. In these regions, fish removal from strategic sites can be used to restore resilience to a landscape where inaction might lead to tipping points of species loss,” writes Ryan and her co-authors Wendy Palen of Simon Fraser University, Michael Adams of the U.S. Geological Survey and Regina Rochefort of the North Cascades National Park. 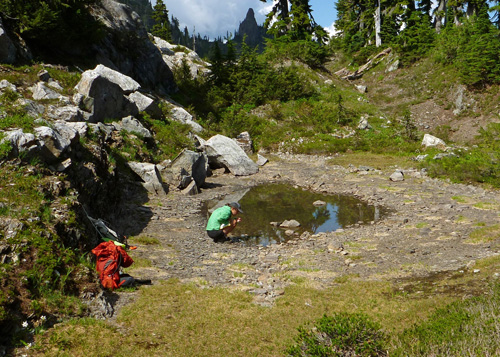 With climate change, there will be fewer seasonal ponds that have water during crucial times of the year when amphibians breed and their young, such as frogs in their tadpole stage, need to be in water. Image credit: M Ryan/U of Washington

In some parts of the West, programs of fish removal are already in place. Jack Oelfke, a manager at North Cascades National Park in Washington state says he watched long-toed salamanders, northwestern salamanders and tailed frogs return to lakes that his crews cleared of introduced trout.  Fish stocking was halted in the park in 2007 after the park and Washington state completed an extensive environmental impact statement. The park began trout removal at eight lakes in 2009.

When considering removing fish, Ryan said human uses such as fishing are a part of the discussion. For the North Cascades National Park, for example, several high-lakes fisheries groups were involved.

“People often ask me what we can do about amphibian declines,” said co-author Adams. “Fish removal is something that we know will help, but is hard to do and not always popular, so we need to be smart about it. This project provides a tool that can help target fish removal to places where it will do the most good for amphibians.”

In some places, if a lake is no longer artificially stocked with fish, the trout will naturally disappear. Non-native fish also can be removed using a variety of techniques including gill nets or piscicides like the organic compound rotenone, which is extracted from plants.

As glaciers receded at the end of the last ice age they left behind thousands of isolated high mountain lakes and ponds devoid of fish. The bodies of water range in size from many acres, large enough to sail a boat on is how Ryan describes them, to ones smaller than your living room.

For centuries frogs, salamanders and other aquatic species flourished in these high elevation habitats where food was plentiful and their eggs and young were relatively safe from predators. In the late 1800s things started to change when trout were brought to mountain lakes and ponds in the American West by settlers looking for recreational fishing opportunities.  Stocking intensified after World War II with millions of fish being dropped from aircraft by agency wildlife managers. Today 95 percent of the large mountain lakes have trout.

At risk are species such as the Cascades frog. Found only at high elevations in Washington, Oregon and California, Cascades frogs can live for 20 or more years, can survive under 30 feet of snow and, during the mating season, the males make chuckling sounds.

“We hope newly developed wetland modeling tools can improve climate adaptation action plans so ecosystems can maintain their resilience in the face of a changing climate,” Ryan said.