An international team of scientists has demonstrated a breakthrough in the design and function of nanoparticles that could make solar panels more efficient by converting light usually missed by solar cells into usable energy.

The team, led by scientists at the U.S. Department of Energy’s Lawrence Berkeley National Laboratory (Berkeley Lab), demonstrated how coating tiny particles with organic dyes greatly enhances their ability to capture near-infrared light and to reemit the light in the visible light spectrum, which could also be useful for biological imaging. 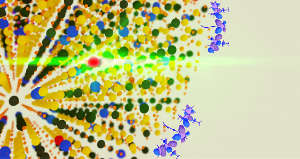 An erbium atom (red) in a nanocrystal emits visible, green light via a process known as upconversion that could lead to the development of improved solar cells that capture some previously missed solar energy. Scientists discovered that coating the particles with dyes (blue and purple molecules at right) can greatly enhance this light-converting property. (Image credit: Berkeley Lab)

Once they understood the mechanism that enables the dyes on nanoparticles to function as antennas to gather a broad range of light, they successfully reengineered the nanoparticles to further amplify the particles’ light-converting properties. Their study was published online April 23 in Nature Photonics.

“Since the near-infrared wavelengths of light are often unused in solar technologies that focus on visible light,” Cohen added, “and these dye-sensitized nanoparticles efficiently convert near-infrared light to visible light, they raise the possibility of capturing a good portion of the solar spectrum that otherwise goes to waste, and integrating it into existing solar technologies.”

Researchers found that the dye itself amplifies the brightness of the reemitted light about 33,000-fold, and its interaction with the nanoparticles increases its efficiency in converting light by about 100 times.

Cohen, Schuck, and Chan had worked for about a decade to design, fabricate, and study the upconverting nanoparticles (UCNPs) used in this study. UCNPs absorb near-infrared light and efficiently convert it to visible light, an unusual property owing to combinations of lanthanide metal ions in the nanocrystals. A 2012 study suggested that dyes on the UCNPs’ surface dramatically enhances the particles’ light-converting properties, but the mechanism remained a mystery.

“There was a lot of excitement and then a lot of confusion,” Cohen said. “It had us scratching our heads.”

Although many researchers had tried to reproduce the study in the following years, “Few people could get the published procedure to work,” added Chan. “The dyes appeared to degrade almost immediately upon exposure to light, and nobody knew exactly how the dyes were interacting with the nanoparticle surface.”

The unique mix of expertise and capabilities at the Molecular Foundry, which included theoretical work and a mix of experiments, chemistry know-how, and well-honed synthetic techniques, made the latest study possible, he noted. “It’s one of those projects that would be difficult to do anywhere else.”

Experiments led by David Garfield, a UC Berkeley Ph.D. student, and Nicholas Borys, a Molecular Foundry project scientist, showed a symbiotic effect between the dye and the lanthanide metals in the nanoparticles.

The studies showed that a match in the measurements of the dye’s light emission and the particles’ light absorption confirmed the presence of this triplet state, and helped inform the scientists about what was at work.

They then found that by increasing the concentration of lanthanide metals in the nanoparticles, from 22 percent to 52 percent, they could increase this triplet effect to improve the nanoparticles’ light-converting properties.

“The metals are promoting dyes to their triplet states, which helps to explain both the efficiency of energy transfer and the instability of the dyes, since triplets tend to degrade in air,” Cohen said.

The nanoparticles, which measure about 12 nanometers, or billionths of meters, across, could potentially be applied to the surface of solar cells to help them capture more light to convert into electricity, Schuck said.

“The dyes act as molecular-scale solar concentrators, funneling energy from near-infrared photons into the nanoparticles,” Schuck said. Meanwhile, the particles themselves are largely transparent to visible light, so they would allow other usable light to pass through, he noted.

Another potential use is to introduce the nanoparticles into cells to help label cell components for optical microscopy studies. They could be used for deep-tissue imaging, for example, or in optogenetics – a field that uses light to control cell activity.

There are some roadblocks for researchers to overcome to realize these applications, Cohen said, as they are currently unstable and were studied in a nitrogen environment to avoid exposure to air.

More R&D is needed to evaluate possible protective coatings for the particles, such as different polymers that serve to encapsulate the particles. “We have even better designs in mind going forward,” he said.

The Molecular Foundry is a DOE Office of Science User Facility.

Researchers from UC Berkeley, the Korea Research Institute of Chemical Technology, Sungkyunkwan University in South Korea, and the Kavli Energy NanoScience Institute at UC Berkeley also participated in this study. This work was supported by the DOE Office of Science; the National Science Foundation; the China Scholarship Council; and the Ministry of Science, Information and Communication Technology, and Future Planning of South Korea.