BPA can induce multigenerational effects on ability to communicate

Findings could shed light on human health concerns and autism

COLUMBIA, Mo. – Past studies have shown that biparental care of offspring can be affected negatively when females and males are exposed to bisphenol A (BPA); however, previous studies have not characterized how long-term effects of BPA exposure in grandmothers and grandfathers might affect offspring communication ability.

In a study published in the journal PLOS One, researchers at the University of Missouri found that mice pups whose grandparents had been exposed to BPA, had different vocalization patterns. This, in turn, could also affect the amount of parental care they received. Scientists believe results could have important relevance to humans. 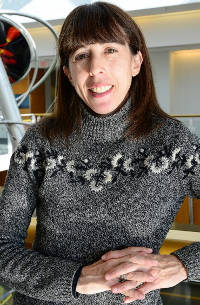 Cheryl Rosenfeld and her team found that California mice pups whose grandparents had been exposed to BPA, had different vocalization patterns. Image credit: University of Missouri

“Rodent pups use vocalizations to communicate with one or both parents, as in the case of biparental species, such as California mice,” said Cheryl Rosenfeld, professor of biomedical sciences in the College of Veterinary Medicine, investigator in the Bond Life Sciences Center, and research faculty member for the Thompson Center for Autism and Neurobehavioral Disorders at MU. “There are potential concerns that developmental exposure to BPA might increase an infant’s risk for autism spectrum disorder. Crying is the infant’s earliest communication form and changes in crying vocalization patterns might provide the earliest diagnostic tool for autism spectrum disorders (ASD). Thus, it is important to determine whether multigenerational exposure to BPA can alter pup vocalization patterns.”

The California mouse is used as a model for examining parental behaviors because they are monogamous and, much like humans, both male and female partners contribute to neonatal-rearing. Impaired care could lead to adverse consequences for the young and, since brain regions and hormones regulating biparental behaviors appear to be similar across species, this study likely has human implications.

Bisphenol A is a chemical that is used in a variety of consumer products, such as water bottles, dental composites and resins used to line metal food and beverage containers. These endocrine disruptors affect the global regulatory pathways of the brain often mimicking the function of natural hormones in animals and humans during crucial stages of development.

For the study, researchers exposed female and male California mice to one of three diets. One contained BPA; the second contained concentrations of ethinyl estradiol, another endocrine disruptor; and the third was free of endocrine disruptors. The offspring were placed on a endocrine disruptor-free diet when they were weaned and throughout their lifespan. Finally, the vocalization patterns of the third generation of mice, which also were not directly exposed to BPA or EE, were examined.

The grandoffspring were tested in “recording boxes” in isolation and away from their home-cages. There, the pups were recorded at intervals on given days that represented different times in their development. Vocalizations were measured for duration, as well as patterns or “syllables,” which represent phrases that pups emit when calling their parents for care. These vocalizations were then measured against pups that were not exposed to BPA or ethinyl estradiol (EE).

“We found that during specific postnatal periods, BPA and EE exposed, second-generation pups demonstrated augmented vocalization responses, which could indicate that they are in distress,” Rosenfeld said. “This could be problematic as their heightened vocalization patterns at certain postnatal days might also suggest they are perceiving and responding to the compromised parental care, as we have already shown, but yet, the parents are not adjusting the amount of parental care provided in response to their increased vocalizations. Such effects might also be attributed to multigenerational exposure to BPA and EE and suggest that even from early postnatal life grandoffspring whose grandparents were exposed to these endocrine disruptors are showing mental distress. While more work needs to be done, the multigenerational effects observed in California mice pups could thus also have ties to human communication deficits as seen in people with autism or other neurobehavioral disorders.”

The study, “Multigenerational effects of Bisphenol-A or Ethinyl Estradiol Exposure on F2 California Mice (Peromyscus californicus) pup vocalizations,” was funded by the National Institute of Environmental Health Sciences Grant (5R21ES023150) and was published in the journal PLOS One. The content is solely the responsibility of the authors and does not necessarily represent the official views of either funding agency.