Researchers with the U.S. Department of Energy (DOE)’s Lawrence Berkeley National Laboratory (Berkeley Lab) have discovered a universal technique for stripping nanocrystals of tether-like molecules that until now have posed as obstacles for their integration into devices. These findings could provide scientists with a clean slate for developing new nanocrystal-based technologies for energy storage, photovoltaics, smart windows, solar fuels and light-emitting diodes.

Nanocrystals are typically prepared in a chemical solution using stringy molecules called ligands chemically tethered to their surface. These hydrocarbon-based or organometallic molecules help stabilize the nanocrystal, but also form an undesirable insulating shell around the structure. Efficient and clean removal of these surface ligands is challenging and has eluded researchers for decades. 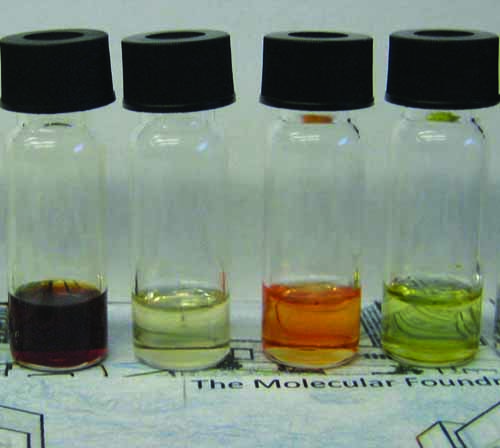 “Our technique basically allows you to take any nanocrystal—metal oxides, metallic, semiconductors—and turn these into dispersions of ligand-free nanocrystal inks for spin or spray coating and even patterning using an ink jet printer,” says Brett Helms, a staff scientist in the Organic and Macromolecular Synthesis Facility at Berkeley Lab’s Molecular Foundry, a nanoscience research center.  “What’s more, they retain their structural integrity and exhibit more efficient transport properties in devices.”

Many nanocrystals important for energy devices cannot withstand strong acids or oxidizing agents typically used to strip organic ligands—these nanocrystals simply dissolve. In this study, Helms and coworkers investigated atomistic details of the interaction between a lead selenide nanocrystal—a semiconductor material—and ligands surrounding its surface. The team then used chemical reagents based on Meerwein’s salt to react with nanocrystals chemically to render these coordinating ligands incapable of re-binding to the surface, creating ‘naked’ nanocrystals in solution or as a thin film on a support.  This technique, Helms says, turned out to be exceedingly general.

“Our team has developed a general method of removing ligands on a nanocrystal to obtain “bare” nanocrystal surfaces,” says Evelyn Rosen, a post-doctoral researcher working with Helms.  “These bare nanocrystals may have unique properties themselves, but also enable the addition of new ligands to this bare surface as desired for some types of nanocrystals. Most significantly, this technique should expand the utility of nanocrystals by granting more control over the optimization of their properties.” 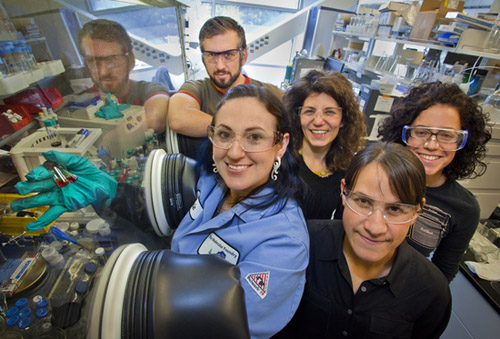 To demonstrate the nanocrystals were genuinely stripped of their ligands, the team characterized thin films of ligand-coated and bare lead selenide nanocrystals with a new technique called nanoscale infrared spectroscopy, or nano-IR. In this technique, infrared light absorbed by the films is used to analyze excitations from specific molecular vibrations, such as the carbon-hydrogen bonds formed by ligands.  Using nano-IR, the researchers found nanocrystals were uniformly bare across macroscopic distances, leading to an increase in electronic conductivity by several orders of magnitude when compared with unstripped nanocrystal films.

“This method is applicable in a truly universal fashion and makes it possible to use nanocrystals in a broad range of applications and in different environments,” says Delia Milliron, Director of the Inorganic Nanostructures Facility at the Foundry and a coauthor on this study.

Indeed, Milliron adds, several Foundry users are already taking advantage of these nanocrystals for projects on energy storage and supercapacitor materials, which store energy like batteries but can be charged more rapidly.

“Having a robust yet simple procedure to process ‘activated’ nanocrystals from solution over large areas, commensurate with the demands of a manufacturing process, is an important first step to integrating these exciting new materials into next generation energy-related devices,” Helms adds. “We are leveraging this process broadly in our research and encourage potential collaborators to submit user proposals to the Molecular Foundry,”

Rosen is the lead author and Helms the corresponding author of a paper reporting this research in the journal Angewandte Chemie International Edition. The paper is titled “Exceptionally mild reactive stripping of native ligands from nanocrystal surfaces using Meerwein’s salt.”  Co-authoring the paper with Rosen, Helms and Milliron were Raffaella Buonsanti, Anna Llordes and April Sawvel.

This work at the Molecular Foundry was supported by DOE’s Office of Science.