AUSTIN, TX — A new form of proteins discovered by researchers at The University of Texas at Austin could drastically improve treatments for cancer and other diseases, as well as overcome some of the largest challenges in therapeutics: delivering drugs to patients safely, easily and more effectively.

The protein formulation strategy, discovered by chemical engineering faculty members and students in the Cockrell School of Engineering, is unprecedented and offers a new and universal approach to drug delivery — one that could revolutionize treatment of cancer, arthritis and infectious disease. 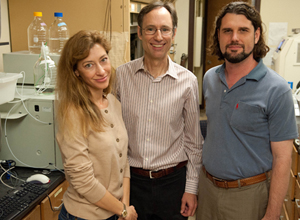 Chemical Engineering Professors Jennifer Maynard, Keith P. Johnston and Thomas Truskett have discovered a new form of proteins that could drastically improve treatments for cancer and other diseases, as well as overcome some of the largest challenges in therapeutics: delivering drugs to patients safely, easily and more effectively. Image credit: The University of Texas at Austin

“We believe this discovery of a new highly concentrated form of proteins — clusters of individual protein molecules — is a disruptive innovation that could transform how we fight diseases,” said Keith P. Johnston, a chemical engineering professor and member of the National Academy of Engineering. “It required integration of challenging contributions in fundamental science and engineering from three of our chemical engineering research groups.”

The research, led by Johnston, Chemical Engineering Professor Thomas Truskett and Assistant Professor Jennifer Maynard, was published online recently ahead of a print version to appear soon in the ACS Nano journal.

“The real challenge in developing therapeutics is how do you deliver them to patients,” Maynard said.

Typically, protein biopharmaceuticals are administered intravenously at dilute concentrations in a hospital or clinic. Scientists and engineers have long tried to produce safe drugs at higher concentrations so that a patient could self-inject the drugs at home, similar to an insulin shot. But doing so has been stymied by the fact that proteins, in high-concentration formulations, form aggregates that could be dangerous to patients and gels that cannot be injected.

The Cockrell School research team has introduced a new physical form of proteins, whereby proteins are packed into highly concentrated, nanometer-sized clusters that can pass through a needle into a patient to treat disease. The novel composition avoids the pitfalls of previous attempts because drug proteins are clustered so densely that they don’t unfold or form dangerous aggregates.

Through the research, the team formed protein nanoclusters in water simply by properly adjusting the pH (to lower protein charge) and adding sugar to crowd protein molecules together. Upon dilution, or subcutaneous injection into a mouse, the proteins separate back into individual stable molecules with biological activity. Once injected, the protein in the bloodstream attacks targeted cells and tumors similarly as for protein delivered via IV therapy.

Since the researchers began their collaboration in 2004, the nanoclusters they developed have been successfully tested on mice, multiple major pharmaceutical companies are pursuing them and three patents have been filed through the university’s Office of Technology Commercialization.

Two undergraduate students also played a key role in the research, Johnston said, leading many others to realize the benefit of undergraduate research projects.

“Numerous undergraduate students at UT are realizing the enormous opportunities they have to contribute to science, engineering and human health when they get involved in research projects,” Johnston said.

The research is funded by the National Science Foundation, the National Institutes of Health, the Welch Foundation and the Packard Foundation. Starting in 2012, two major pharmaceutical companies will fund the work.