A Galactic Magnetic Field in A Lab Bolsters Astrophysical Theory

ANN ARBOR, Mich.— Why is the universe magnetized? It’s a question scientists have been asking for decades. Now, an international team of researchers including a University of Michigan professor have demonstrated that it could have happened spontaneously, as the prevailing theory suggests.

The findings are published in the Jan. 26 edition of Nature. Oxford University scientists led the research.

“It has been a very enduring mystery.”

With high-energy pulsed lasers in a French laboratory, the researchers created certain conditions analogous to those in the early universe when galaxies were forming. Through their experiment, they demonstrated that the theory known as the Biermann battery process is likely correct. 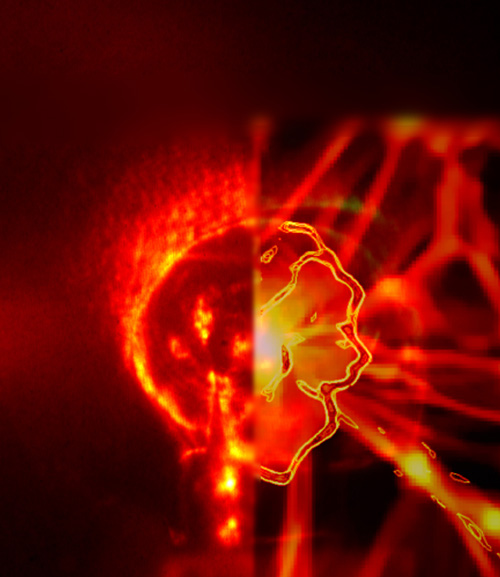 This composite image shows a laser-produced shock wave on the left side. Brighter colors show the shock region of higher density or temperature. The right side shows a simulation of a shock wave collapsing, as it would have during the pre-galactic phase in the universe. A. Ravasio (LULI), A. Pelka (LULI), J. Meinecke (Oxford), C. Murphy (Oxford), and F. Miniati (ETH). Image credit: University of Michigan

Discovered by a German astronomer in1950, the Biermann process predicts that a magnetic field can spring up spontaneously from nothing more than the motion of charged particles. Plasma, or charged particle gas, is abundant in space.

Scientists believe that large clouds of gas collapsing into galaxies sent elliptically shaped bubbles of shockwaves through the early universe, touching off flows of electric current in the plasma of the intergalactic medium.

Anyone who has built an electromagnet in middle school science class is familiar with this concept, Drake said.

“If you can make current flow, you make a magnetic field,” Drake said.

The question in astrophysics was what could have generated the current. This experiment demonstrated that such asymmetrical shockwaves could do the job.

The results, Drake said, aren’t particularly surprising. But it’s important for scientists to test their theories with experiments.

“These results help strengthen the understanding that we’ve taken from our interpretation of astrophysical data,” Drake said. “And understanding the universe and most definitely the origin of life is one of the great human intellectual quests.”