Researchers have made a major advance in efforts to regenerate damaged hearts. They discovered that transplanted heart muscle cells, grown from stem cells, electrically couple and beat in sync with the heart’s own mucle.

The grafts also reduced the incidence of arrhythmias (irregular heart rhythms) in a guinea pig model of myocardial infarction (commonly known as a heart attack).

This finding from University of Washington-led research is reported in the Aug. 5 issue of Nature. 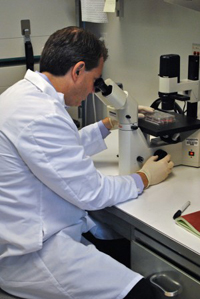 During a myocardial infarction the flow of oxygen-rich blood to the heart muscle is interrupted by formation of a clot, causing death of the down-stream heart muscle and its eventual replacement by scar tissue. This can cause mechanical problems with filling and emptying the heart, and it can also interfere with the electrical signals that pace the heartbeat.

In this study, the guinea pigs’ hearts had an injury to the left ventricle, the thick walled lower chamber in the heart that pumps oxygenated blood to the body. The injury left a scar and thinned the ventricle, which showed both reduced pump function and greater susceptibility to arrhythmias.

Consistent with previous studies, tests showed that the injured hearts with the human cardiac cell grafts had improved mechanical function.

More surprisingly, these hearts showed fewer arrhythmias than did injured hearts without such grafts. 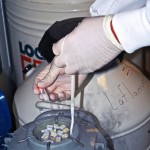 “We showed a couple years ago that transplanting human embryonic stem cell-derived heart muscle cells improves the pumping activity of injured hearts,” said Dr. Michael Laflamme, UW associate professor of pathology and a member of the UW Center for Cardiovascular Biology and the Institute for Stem Cell & Regenerative Medicine.

“In this recent paper,” he explained, “we show that the transplantation of these cells also reduces the incidence of arrhythmias [heart rhythm disturbances].”

Laflamme and Dr. Charles E. Murry, UW professor of pathology, bioengineering and medicine, Division of Cardiology, were the senior authors of the paper. The lead authors were Drs. Yuji Shiba and Sarah Fernandes in the UW Department of Pathology. Shiba is also from the Department of Cardiovascular Medicine at Shinshu University in Japan.

Because arrhythmias are a major cause of death in patients after a heart attack, Laflamme pointed out, this effect might be clinically useful if proven successful in large animal models as well. 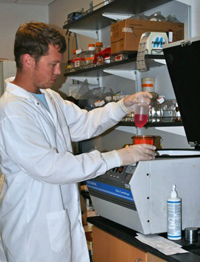 “Instead, they suppress arrhythmias, at least in the guinea pig model,” Laflamme and his team were pleased to discover.

While Laflamme and Murry had previously shown that transplanting these types of cell grafts improved pump function in injured hearts, Laflamme noted that it had not been previously determined if the grafts actually coupled and fired synchronously with heart’s original muscle.

There was the possibility, he suggested, that they exerted their beneficial effects indirectly, perhaps by releasing signaling molecules, rather than by forming new force-generating units.

“In our study, we discovered that the heart cell grafts do, in fact, couple to the guinea pig hearts,” he said.

The research team found the heart cell grafts electrically coupled in all of the normal, uninjured hearts into which they were transplanted, and in the majority of the injured hearts.

The researchers were able to observe this coupling by transplanting human heart muscle cells that were genetically modified to flash every time they fired. By correlating this optical signal from the graft cells with the electrocardiogram – electrical signals from the recipient heart – the researchers were able to determine whether cell grafts were electrically coupled with the animal’s heart.

Watch a video of the flashing heart muscle cells and transplanted graft.