COLUMBIA, Mo. – Marrying multiple husbands at the same time, or polyandry, creates a safety net for women in some cultures, according to a recent study by a University of Missouri researcher. Extra husbands ensure that women’s children are cared for even if their fathers die or disappear. Although polyandry is taboo and illegal in the United States, certain legal structures, such as child support payments and life insurance, fill the same role for American women that multiple husbands do in other cultures.

“In America, we don’t meet many of the criteria that tend to define polyandrous cultures,” said Kathrine Starkweather, doctoral student in MU’s Department of Anthropology in the College of Arts and Science. “However, some aspects of American life mirror polyandrous societies. Child support payments provide for offspring when one parent is absent. Life insurance allows Americans to provide for dependents in the event of death, just as secondary husbands support a deceased husband’s children in polyandrous societies.” 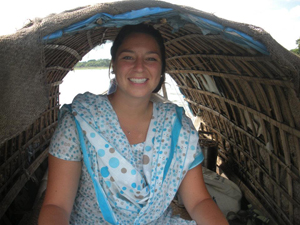 Katherine Starkweather. Marrying multiple husbands at the same time, or polyandry, creates a safety net for women in some cultures, according to a recent study by Kathrine Starkweather, anthropology doctoral student in MU’s Department of Anthropology. Image credit: University of Missouri

Starkweather and her co-author, Raymond Hames, professor of anthropology at the University of Nebraska, examined 52 cultures with traditions of polyandry from all continents except Europe. They found that similar conditions seemed to influence cultures toward polyandry. Males frequently outnumbered females in these cultures, as a result of high mortality prior to adulthood. Although males out-numbered females, they also were more likely to die in warfare or hunting and fishing accidents or to be absent for other economic reasons. Polyandrous cultures also tended to be small scale and egalitarian.

In approximately half of the cultures studied, the other husbands were closely related to the first husband, a practice with economic repercussions. In previously studied polyandrous cultures, especially those of Nepal, Tibet and India, inheritance traditions called for land to be divided evenly among male offspring after a parent’s passing. That practice would have resulted in land being sub-divided into useless parcels too small to provide enough crops to feed a family. However, if several brothers married the same wife, the family farm would stay intact. In the small egalitarian cultures Starkweather studied land and property ownership was unusual. In these societies, younger brothers in the marriage often protected and provided food for the family in the absence of the older brother, who was often the primary husband.

“This research shows that humans are capable of tremendous variability and adaptability in their behaviors,” said Starkweather. “Human marriage structures aren’t written in stone; throughout history, people have adapted their societal norms to ensure the survival and well-being of their children.”

The study “A Survey of Non-Classical Polyandry” was published in the journal Human Nature. Starkweather conducted the research while at the University of Nebraska – Lincoln.