Taking a Robotic Geologist to Mars

As Mars rover Curiosity makes its final approach to the Red Planet, two UA geoscientists are getting ready to help solve some of the mysteries of its geologic past.

On Aug. 5, at about 10:30 p.m., an already busy summer will kick into overdrive for University of Arizona geosciences professor Bob Downs and one of his graduate students, Shaunna Morrison. At that time – provided everything goes as planned – Curiosity, the most sophisticated exploration vehicle ever sent to another planet, will parachute toward the Martian surface faster than the speed of sound after a nine-month journey through space. And as soon as it sinks its six wheels into the red dust, the two scientists specializing in mineralogy will have not one, but two planets to deal with.

As “primary data downlink leaders” designated by NASA, Downs and Morrison are part of a team of scientists tasked with the identification of rocks that Curiosity will encounter during its two-year expedition across the floor of Gale Crater near the Martian equator.

“The Curiosity rover is the next best thing to sending a geologist to Mars,” said Downs. “It carries all the necessary equipment that we would use here on Earth when we study rocks and minerals.” 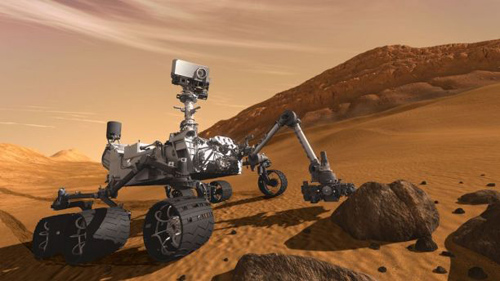 In this artist's concept of Curiosity, the Mars rover examines a rock with a set of tools at the end of the rover's arm, which extends about 2 meters (7 feet). Two instruments on the arm can study rocks up close. Also, a drill can collect sample material from inside of rocks and a scoop can pick up samples of soil. The arm can sieve the samples and deliver fine powder to instruments inside the rover for thorough analysis. (Image credit: NASA/JPL-Caltech)

NASA’s latest in a series of Mars rovers is also the biggest and best of the bunch. Two times larger and five times heavier than the Mars Exploration Rovers Spirit and Opportunity, Curiosity rivals a small SUV in size and carries 15 times the weight of the scientific instruments that Spirit and Opportunity have. Mars Science Laboratory’s Curiosity was designed to survey the Martian landscape and examine rocks up close. It is the first rover lacking solar panels, which suffered from frequent accumulations of dust.

Instead, a dustbin-sized nuclear generator mounted to the rover’s back powers the vehicle and its scientific payload. The heat generated by the radioactive decay of non-weapons-grade plutonium-238 is turned into electrical power supplying the rover’s batteries day and night.

Curiosity is the first rover sent to another planet capable of not only navigating the terrain, but scooping up and analyzing rock and dust samples. Its mission is to venture up to 12 miles from its landing site and explore the area for past or present conditions favorable for life, and conditions capable of preserving a record of life. The rover is expected to collect, grind and analyze about 70 samples of soil and rock.

Downs and Morrison are members of the science team in charge of CheMin, one of 10 scientific instruments mounted on the rover. CheMin, short for chemistry and mineralogy, is the first X-ray diffractometer ever sent to space, said Downs. 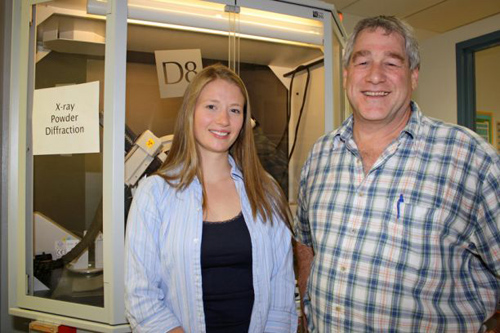 “It works by shooting X-rays at a rock sample, which interact with the electrons in the rock and send back signals that are like fingerprints,” he explained. “It’s the standard for identifying minerals, just what you would do in a lab here on Earth.”

Once CheMin has finished analyzing a rock sample, which can take up to 10 hours, Curiosity will send the data to Earth, where Downs and Morrison will be among those who gather the data and interpret them.

Downs has accumulated the largest database of minerals in the world. About 5,000 small vials, neatly labeled and stored in a cabinet in his lab, represent about 2,200 species of the approximate 4,600 known Earth minerals, more than any other lab in the world. The scientists will use that database to figure out what minerals make up the sample that Curiosity scooped up millions of miles away based on its X-ray “fingerprint,” which is unique to each mineral.

“The beauty of X-ray diffraction is that even if we get a sample of an unknown mineral, we can figure out its exact chemical composition and structure.”

The technique was not an option on previous, solar-powered rovers because it requires high energies of about 45,000 volts.

Another instrument, ChemCam, short for chemistry through the camera, combines a camera with a mass spectrometer to analyze rocks from a distance. 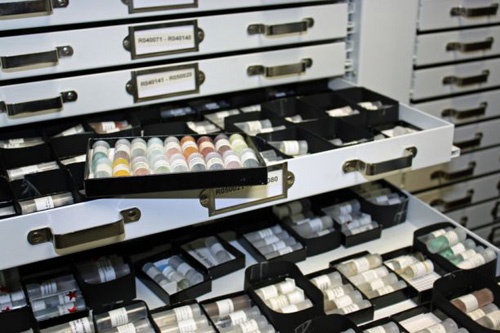 Stacked in drawers upon drawers, Downs’ lab houses the world’s most comprehensive mineral collection, representing about half of the world’s known mineral species. (Photo by Beatriz Verdugo/UANews)

In Star-Wars-like fashion, ChemCam, mounted onto the rover’s mast, will shoot a laser beam at a rock up to 23 feet away, vaporize a small amount of it and a spectrometer will analyze the rock’s chemical composition based on the pattern of the reflected light. The idea is to sample the terrain from a distance and get a rough overview of its composition before sending the rover for a close investigation. In addition, the rover is equipped with a magnifying glass and a digital camera providing real-color, close-up views of rocks.

“That’s the first thing a geologist would do here on Earth,” Downs said. “Take your hand lens to the rock and ask, what are we looking at here? If it’s anything of interest, we would focus on it, grab the stuff and really figure out what it is.”

Curiosity’s landing site was carefully selected to yield as much information as possible about Mars’ geologic past. Images and spectroscopic analyses taken from an orbit around Mars by the UA-operated HiRISE camera have identified minerals at the bottom of Gale Crater, such as clays and sulfates, which require liquid water to form.

Of special interest is Mount Sharp, a central mound rising about 3.4 miles from the crater bottom. The rock layering in Mount Sharp suggests it is the surviving remnant of an extensive sequence of sediments preserving clues to the geologic past of Mars, waiting to be deciphered.

“It turns out that near the place we’re going to land, there are some boulders that may have rolled down the mountain,” Downs said, “so we might able to sample parts of the mountain without actually having to go up there.” 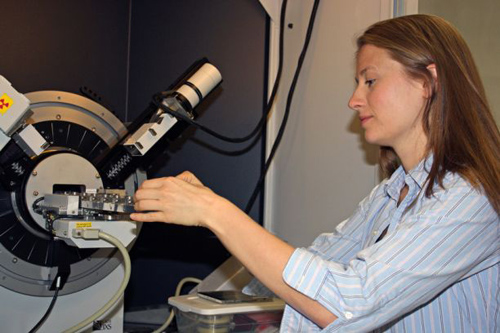 Shaunna Morrison loads a mineral sample onto the tray of an X-ray diffractometer in the Downs lab. The X-ray machine on Curiosity is much lighter and smaller than any instrument on Earth. (Photo by Beatriz Verdugo/UANews)

Morrison is especially fascinated by rare Earth minerals, a group of minerals comprising about 300 known species on Earth. Some of them are poorly understood, others are still waiting to be discovered and described scientifically.

Rare Earth minerals attract increasing interest from scientists and engineers because of their unique chemical properties. Some of them have strong magnetic properties, enabling engineers to build smaller electrical motors or tiny yet powerful speakers.

“Rare Earth minerals are heavily used in almost all our modern technology,” Morrison explained. “iPods, TVs, LED screens, they all depend on those minerals.”

During Curiosity’s mission, she hopes to be able to divide her time between her Earthly research and helping identify minerals on Mars. Currently, she is involved in a study trying to characterize a previously unknown Rare Earth mineral.

Finding Rare Earth minerals on Mars would be a surprise to scientists because it is thought that in terms of its mineral evolution Mars never got quite as far as the Earth.

“Two-thirds of known minerals on Earth formed because of interactions among rocks, atmosphere and life,” Downs said. “Mars may not have gone that far. We may find that it ‘froze’ at an earlier stage so to speak.”

Asked if he expected to find any mineral on Mars that does not occur on Earth, he paused, then said, “I don’t know. Probably not, but I hope there is something new. Just for the challenge, you know?”