COLUMBIA, Mo. – America is looking for more biofuel through the use of crops such as corn and soybeans, but concerns about higher food prices persist when land for biofuel displaces land for food crops. Now, researchers at the University of Missouri are hoping to increase biofuel production without impacting food production. This fall, MU scientists are beginning a study to determine how non-food biofuel crops, such as switchgrass, grow in marginal land along the floodplains, where most crops cannot thrive.

Now, the team in the MU College of Agriculture, Food and Natural Resources has received a $5.4 million grant from the U.S. Department of Energy to further its research. The project is part of a $125 million international project to further research that will study how to use marginal land to grow high-yield, biofuel crops and convert them to advanced biofuels.

“In the 10 states along the Missouri and Mississippi Rivers, 100 million acres of marginalized agricultural land is unused or underutilized often due to frequent flooding” said Shibu Jose, H.E. Garrett Endowed Professor in the School of Natural Resources and director of the MU Center for Agroforestry. “If farmers can plant just 10 percent of marginal floodplain land with crops designated for use in biofuels, we can produce 6 to 8 billion gallons of liquid fuel annually. Planting this land with crops designated for biofuels would have little to no effect on the food supply.” 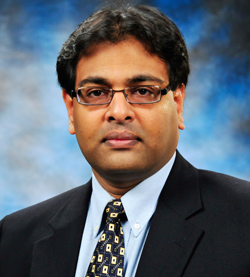 Shibu Jose, director of the MU Center for Agroforestry. Jose has received a $5.4 million grant from the U.S. Department of Energy to determine how non-food biofuel crops, such as switchgrass, grow in marginal land along the floodplains, where most crops cannot thrive. Image credit: University of Missouri

As part of the five-year grant project, MU researchers are planning several trials. One trial will field test 15 types of biomass sorghum and 15 types of switchgrass. Switchgrass is a perennial plant that needs little care once planted. Sorghum is an annual crop, but requires less water and fertilizer compared to corn. In addition, the strong root systems reduce erosion and water pollution by filtering water as it runs into streams and rivers. The team will identify which varieties grow best under flood and drought conditions, as well as in different soil types.

To make biofuel, farmers grow crops that are harvested and shipped to a nearby facility where the biomass is condensed into small pellets or converted to fuel. The pellets also can be shipped to larger plants where they are converted into fuel if rural plants are not equipped for the biofuel conversion. Jose envisions a network of farmers producing biomass and shipping it to local pellet-producers, who will ship the pellets to refineries.

“We need to build a network of pellet producers because transportation costs need to be low enough that farmers can still profit off of growing crops for biofuel,” Jose said. “With the smaller condensed pellets, we can transport a great amount of energy at a low cost.”

As a land-grant university, research benefitting the state is part of MU’s mission. This research which helps provide American consumers with abundant, affordable agricultural products was part of the goal of the Morrill Act, which established land-grant institutions in 1862.