*Go behind the scenes with msnNOW, a new service that provides up-to-the-minute updates on breaking news, trends, and social conversations.*

REDMOND, Wash. – It was a story that everyone hoped wasn’t true. On Saturday, Feb. 11, the day before the Grammys, Twitter and Facebook posts reported that one of the music industry’s once brightest stars, Whitney Houston, had died. Variations on the hashtag #RIPwhitney filled the top trending spots on Twitter. Facebook feeds were filled with memories of the late singer’s music – a first kiss, a first dance or first song ever bought. And YouTube exploded with videos of Houston’s past performances.

An hour or so after reports of the singer’s death began appearing via social media sites, the mainstream media began reporting confirmations of her death. As the day progressed, the major cable news stations began reading celebrity tweets aloud memorializing the singer and encouraging readers to visit their Facebook fan pages to join in the discussion.

When a major story like Houston’s death breaks, online news sites, newscasters, reporters, bloggers – everyone relies on editorial judgment to determine what news to present to the public. Stories such as Houston’s death are easy to identify. Other trends or stories, such as the Rebecca Black “Friday” phenomenon, may take days, weeks or even months to get on an editor’s radar – by which time the Internet has moved on. (In case you missed it: Black is a teen singer who rose to brief Internet stardom last year when her “Friday” video went viral.)

Starting now, you don’t have to wait to get introduced to stories like Rebecca Black. All you need to do is visit msnNOW, a new service from MSN that launches today. The service, available at now.msn.com, surfaces the latest buzz from Facebook, Twitter, Bing and BreakingNews.com. It’s designed to “cut through the clutter” on the Web to provide a real-time view of breaking trends and the hottest social conversations, what people are saying about them, and why they matter.

About the video: msnNOW is a new way to track what’s trending on the Web in real-time based on a combination of social signals, algorithms and editorial insights. Get a look at the technology, people and passion behind msnNOW. Credit: Microsoft

“msnNOW is really about keeping consumers in the know about the hottest topics on the Web,” says Bob Visse, general manager for MSN and the person who will lead the new service’s overall direction. “We’re using technology we built that analyzes all the social signals from Twitter, Facebook and the Web as well as search signals that come from Bing.” 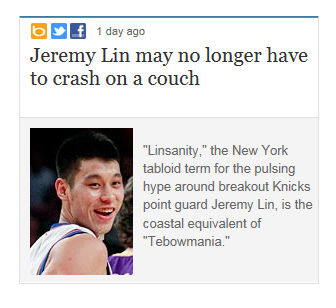 New York Knicks point guard Jeremy Lin’s dramatic rise from benchwarmer to superstar in just one week has captured the nation’s attention – and made him a social media darling and msnNOW star. Image credit: Microsoft

Those signals are analyzed using a new tool developed in-house at Microsoft – the Demand Dashboard. In addition to pulling out trends from the roaring torrent of social media in real time, the tool also looks at what people are searching for on Bing.

“What we’re really looking for is the velocity of trending topics – what’s boiling to the surface,” Visse says. “The goal is to catch trends as they are accelerating and capture them before they hit the mainstream, in a way that is captivating.”

The msnNOW editorial team lives and breathes the Demand Dashboard feed, using it to handpick the most interesting and popular items to present to its audience of “info snackers.” The real-time information enables editors to catch trends as they emerge, Visse says. If a name or topic begins trending that the team doesn’t recognize, they can research it immediately and determine if it’s worth putting on msnNOW. The reporting team then prepares text snippets about the final story candidates. This marriage of technology and reporting ensures readers are getting the latest breaking trends that are truly buzz-worthy.

“We keep it to a hundred words or less because the demographic interested in these trends is very accustomed to ‘info snacking’ throughout the day. They’re used to this shortened language,” Visse explains. “It’s definitely a trend we’ve observed pretty extensively.”

The “infosnacks” will be available wherever audiences want to sample them – on their computer, through Facebook, via mobile, or on any other portable device with an Internet connection. “It’s a way for us to connect with users wherever they are, in whatever mode they are in,” Visse says.

The mobile version of msnNOW features a full HTML experience, perfect for checking on news while standing in line or waiting for a bus.

A New Way to Source Trends

A Microsoft team took on the task of building msnNOW from scratch in early 2011. Less than a year later, the tool behind the new service, Demand Dashboard, was a reality.

“We wanted to build a tool that was capable of ‘listening’ to all the signals,” says Klaus Diaconu, principal program manager for MSN. “What are people talking about on Facebook? What are they tweeting? What are they searching for using Bing? What’s breaking right now on BreakingNews.com? The tool listens to all that and sees what’s spiking in real time.”

In addition to identifying hot topics, the tool analyzes each trend and determines if interest is building, peaking or waning. The tool also reveals where and how each topic is trending within the context of each signal. This greatly reduces the amount of time the msnNOW team must spend finding topics or trends to report on, Diaconu says. 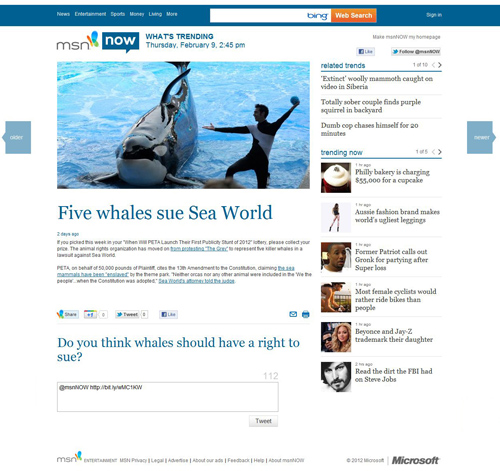 The stories trending on social media don’t always match what's in the top headlines of major news outlets, and can be a bit off beat. Image credit: Microsoft

Traditionally, editors have spent a significant portion of their day looking for what’s breaking, he says. In recent years, this might include monitoring everything from television and newswires to reading blogs, following multiple Twitter feeds and reviewing online resources for leads. As a result, they may spend more time looking for what to write than actually writing.

Demand Dashboard does a lot of that footwork for the msnNOW team, enabling writers to focus on what they’re really good at: writing. 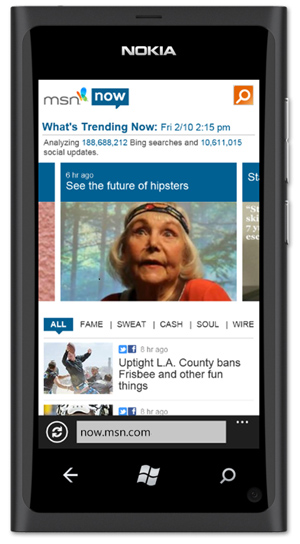 Fans of msnNOW will be able to watch what’s trending in social media on their mobile phone, Facebook, and on their PC. Image credit: Microsoft

“We’ve all seen these links that are cool videos or cool stories that get shared and accelerate, but they’ve been going around forever,” says Tammy Savage, general manager of MSN Social. As an example, she pointed to a recent early morning TV segment showing a little girl who can say words backwards. “That was a video put up on YouTube about 18 months ago.”

She said it was popular on YouTube right away but that it took a long time for it to get to television. “It had to go through a long development curve for people to realize that it was something that people would be interested in,” she says. “We hope to catch it on the first spike, so you don’t have to wait to hear about these cool topics.”

Each day the msnNOW editorial team cherry picks what they want to call out on the site and curate hundred-word nuggets that they publish in video or text form throughout the day, Savage says. Though the team is publishing primarily during the day, it is working toward a goal of 24/7 coverage. With offices in Seattle, New York and London, the team is getting off to a good start.

The msnNOW service represents a shift in the way trends are covered using social media and search to find the hottest conversations on the Web.

msnNOW is tied to Bing in multiple ways, Visse says, starting with the fact that Bing is one of the main sources of information that feeds into the Demand Dashboard. In addition, a feature on the msnNOW page uses Bing to help readers discover more information about that trend.

“It’s another way of taking advantage of Bing both in the creation of the dashboard and also a way to connect customers to Bing in a new and interesting way,” Visse says. “That’s a very important aspect for Microsoft.”

And the benefits go both ways.

With access to Bing, the MSN editorial team and a vast range of technological expertise, Microsoft was uniquely qualified to envision and develop this new approach to reporting on trends entirely in-house. “We’re sort of creating a new category,” Visse says. “There are not that many companies in the world that could do it.”