‘Daughter of the Struggle’

Wearing a mauve-colored dress with flared sleeves that flowed with each dance step, soul singer, educator and activist Ayanna Gregory celebrated the history of the American civil rights movement with an evening of song and spoken word before an enthusiastic audience on Wednesday evening, Feb. 15, in the Gore Recital Hall of the University of Delaware’s Roselle Center for the Arts.

During her performance, “Daughter of the Struggle,” Gregory recalled what it was like growing up as one of 10 children of Lillian and Dick Gregory, the standup comedian who used his comic skills to tell Americans that segregation and racial bigotry were no laughing matter.

Describing her famous father as an actor, author, comedian, humanitarian and warrior who was away a lot, Gregory said, “I sacrificed my dad to the world struggle. I knew my daddy was fighting a battle for human rights and eating rights.”

Early in the performance, in a stage set in the fashion of a family living room, Gregory clutched a doll, voicing the fears felt by a child whose parents were arrested during a civil rights demonstration. 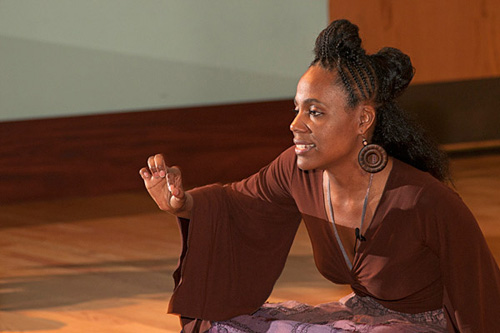 “We was standing together, and we was marching, and then, they started pushing us and said, ‘get into the paddy wagon,’” Gregory said. “Mamma said we would be OK. They took mommy and daddy away and took us to another room. After what seemed like a thousand hours, Mamma came back to us.”

Gregory also recalled the decision of her father to move the family from Chicago to a 300-acre farm in New England.

“My father had the bright idea of moving us to Plymouth, Mass.,” Gregory said. “The rules were no meat, no white bread, no wheat bread, no cheese and no hair permanents.”

While her six sisters and three brothers just wanted to be like any other American family, her parents also were concerned for their children’s safety.

“We were kind of innocent, and we were unaware of the danger in the background,” Gregory said. “My dad always said that ‘fear and God don’t occupy the same place.’” 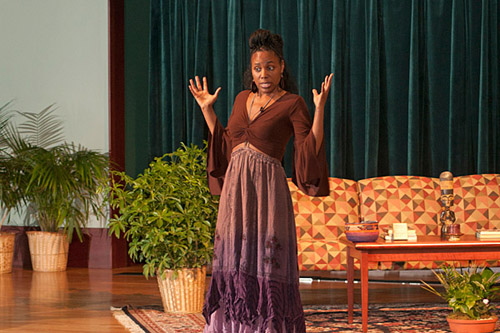 Gregory recalled how her father told her that before the advent of the Rev. Dr. Martin Luther King, Jr., he always had tough guy heroes like those played by film star John Wayne.

“Dr. King changed all of that, and they were afraid of him,” Gregory said. “They didn’t fear him for any other reason than the fact that he was able to change things.”

Her father, Gregory said, also explained to her why the things that King was doing were so important to all Americans.

“If you want to know why the March on Washington (Aug. 28, 1963) was so important, it’s because it was for so many things, such as rights for people with disabilities,” Gregory said. “My dad told me, ‘The next time you see an old white man at the local movie theatre hunched over and taking tickets, you’ll know what the civil rights movement was all about.’”

Gregory also related how the story of her father and the civil rights movement are part of her continuing journey as an educator and an artist.

She described herself and her generation as daughters of the legacy of civil rights leaders — including her famous father, now 80 — and said it is important to celebrate that struggle and the unique individuality that makes life so special.

“Along the way, I found pieces of him, and pieces of me. Pieces of him live in you, and you are the one that you have been waiting for,” Gregory said. “Today is your day, the first day of the rest of your life. You are incomparable. This is your time, and this is your day.”

Following a performance of her 2007 single Now, Gregory shared her experience and ideas of working with youth during a question-and-answer segment.

The event was sponsored by the Department of Black American Studies, the College of Arts and Sciences, the Office of the President, the Center for Black Culture, the Division of Student Life and the Department of Theatre, and is part of UD’s Black History Month: February and Beyond celebration.