*Microsoft employee Carl Greninger helped a team of young students build a working nuclear reactor in his garage. He hopes the project can inspire a passion for physics in students around the country.*

REDMOND, Wash. – Sometimes you have to smash a few atoms to excite people about science.

So says Carl Greninger, a program manager in Microsoft IT Operations by day and full-fledged physics fanatic by night. That’s why he decided to help some young students get hands-on experience with something they couldn’t find in their classrooms: a working thermonuclear reactor.

For the past year, a group of local students – some as young as 13 years old – have met at Greninger’s garage every Friday night to build a type of fusion reactor known as a Farnsworth–Hirsch Fusor. Dubbed IEC-9000, their machine has been fusing atoms and producing neutrons since May. It cost about as much as a high-end SUV, weighs 1,400 pounds, and generates temperatures hotter than the surface of the sun.

The students have shown off their machine at the Microsoft Research Science Fair, and they recently were invited to the World Science Festival in New York by physicist Brian Greene. But the biggest stage for the IEC-9000 perhaps awaits the start of the school year.

“We’re planning to take this out on the road and knock on some high school doors,” Greninger said. “What the fusor really showcases is that we can generate passion and overcome inertia in terms of recruiting young people into physics and fusion research.” 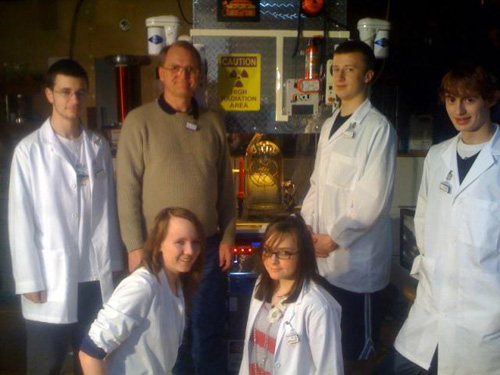 Greninger said he started the North West Nuclear Consortium student group after some friends expressed concern about the state of science and technology curriculums in their children’s schools.

“If these kids are lucky, the only thing the school system is going to give them is Gak, some string and soap bubbles, and perhaps a pair of thoroughly blunted scissors,” he said. “As a result, the real study of science and physics that involves things that are dangerous and sharp and electrifying is becoming nonexistent.”

Which is a problem – science and physics are dangerous and sharp and electrifying. That’s what makes science exciting for students and inspires them to dive deeper. Remove that element, Greninger says, and you get bored expressions in the classroom.

“They hand us strings and paper cups and tell us we’re working with plasma. I just don’t see any point in having science classes like that where you can’t do anything with science,” he said. “It’s pretend. It’s play.” 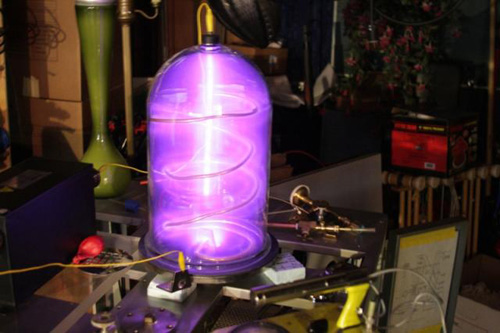 Plasma, a collection of charged particles found inside the fires of the Sun and other stars, glows inside Carl Greninger’s garage. Image credit: Microsoft

Glenn said he still can’t quite get over the fact that he helped build a working nuclear reactor. “Our first reaction to Carl was, really? Is this legal?” he said. “Then we just jumped into it.”

(The machine is perfectly legal, Greninger explained. The Nuclear Regulatory Commission only concerns itself with reactors that use radio isotopes for fuel. The fusor falls under state regulation, just like an X-ray machine, but the amount of radiation produced by the group’s fusor falls well below what Washington state allows.)

What happens inside the IEC-9000 is straightforward, as far as nuclear reactors go, Glenn said. A glass jug sits inside the machine, and inside the jug is a ball of wire. When the machine is turned on, it sucks all the air out of the jug and creates a vacuum. Add a miniscule amount of gas. Then, the controller runs an electric charge through the ball of wire, which attracts all the atoms from the gas. As the atoms head toward the ball of wire they collide, causing some of them to fuse. When they do, they release a neutron and a bunch of energy. Voila – fusion.

The IEC-9000, like all other fusion reactors, hasn’t achieved “break-even,” where more energy is produced than what goes into it. But fusion research is promising, Greninger said. He believes fusion is the future of the nuclear industry, which is facing intense scrutiny amidst the ongoing crisis at Japan’s Fukushima reactor.

That’s a national problem, he said. The United States operates 104 nuclear reactors. It will be increasingly difficult to find qualified nuclear engineers to operate them unless the country’s universities produce them – and fast. At the rate things are going, he said, the number of institutions offering that curriculum will drop into the single digits.

Greninger believes the fusor could help spark passion in schools around the country. (The NWCS plans to produce a video curriculum about the IEC-9000 and distribute it online). He thinks it could also solve the cash crunch many schools and universities are facing. It offers all the bang of a typical university research reactor without the multimillion-dollar price tag. “You can roll this thing into a classroom, plug it into a standard 110-volt outlet, and explore all the same phenomena,” he said.

Greninger himself is the product of a nuclear family, if you will. His brother has worked as a nuclear engineer for 40 years. His aunt was an American Nuclear Society fellow and filed hundreds of patents stemming from nuclear-related work at companies such as DuPont. And his uncle was responsible for the discovery of the glassification of nuclear waste.

But his own nuclear passion was ignited when he was a young boy. It was around the time of the 1962 Seattle World’s Fair. His school class was visiting the University of Washington campus and was given a tour by Albert Babb, a physicist in charge of the university’s nuclear reactor. Greninger bombarded the professor with questions (of course). Afterwards, Babb took him by the hand, led him to the rector’s control room, and plopped him down in a chair. He then instructed Greninger to start turning dials and pulling levers. After a few moments, he told the wide-eyed boy he just started a nuclear reaction.

“I sat there with mouth down around my knees, and the experience always stuck with me,” he said. “If it had that impact on me when I was young, does it still have the same magic today? I’m here to tell you it does.”

He continued: “When these kids have actually stepped up to the machine and fire it up themselves and when they created that 300 million degrees and the Geiger counters are rattling profusely, there’s a sense of accomplishment you can’t put into words. It’s great.”

Glenn agreed. He’s looking forward to sharing his experience with other high school students. “There’s a lot more you can do than what you do in class, and it doesn’t take as much effort as you think,” he said. “We didn’t think we could build a nuclear reactor. Once we did, we were like, ‘Did we just do that?’ It was really easy, and really cool.”