But they are not just pretty — when nails appeared on all fingers and toes in modern primates about 55 million years ago, they led to the development of critical functions, including finger pads that allow for sensitive touch and the ability to grasp, whether it’s a nail polish brush or remover to prepare for the next trend.

In a new study co-authored by University of Florida scientists, researchers recovered and analyzed the oldest fossil evidence of fingernails in modern primates, confirming the idea nails developed with small body size and disproving previous theories nails evolved with an increase in primate body size. More than 25 new specimens of Teilhardina brandti – an extinct primate originally described from a single lower molar — include pieces of upper teeth and ankle bones that show the mammal lived in trees. Its nails allowed the lemur-like animal to grasp onto branches and move through the trees with more agility, researchers said. 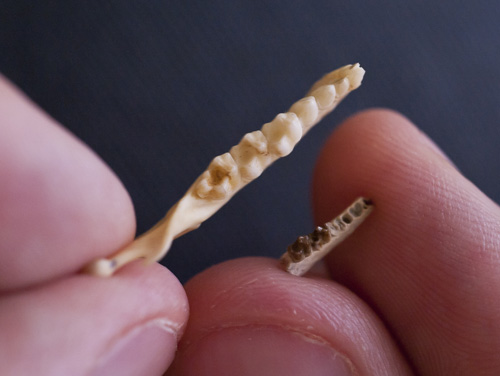 GAINESVILLE, Fla. — In this photo taken June 24, 2011, a Florida Museum of Natural History specimen of a tarsier’s lower jaw, top, is compared with a lower jaw of Teilhardina brandti, the earliest primate found in North America. T. brandti may have behaved similarly to a tarsier, a lemur-like, tree-dwelling primate found in Southeast Asia. In a study published online in the American Journal of Physical Anthropology, University of Florida researchers helped describe more than 25 new specimens of T. brandti, including the oldest evidence of nails in primates. (Photo by Kristen Grace/Florida Museum of Natural History)

“If you take all the primates that are alive today, they’re all going to have characteristics that look the same, but unlike people, many of them live in trees,” said co-author Jonathan Bloch, an associate curator of vertebrate paleontology at the Florida Museum of Natural History on the UF campus. “By finding parts of the skeleton of this primitive primate, we are able to test whether nails were present in the common ancestor of the group that includes lemurs, monkeys, and humans — it’s direct evidence as opposed to speculation.”

Appearing in the current online edition of the American Journal of Physical Anthropology, the study provides a better understanding of the evolutionary relationships of one of the oldest known modern primates, as well as the time frame and environmental conditions that allowed for the development of nails on all fingers and toes, an exclusive feature among primates.

Specimens of T. brandti were collected over the last seven years in northwestern Wyoming’s Bighorn Basin and represent the earliest North American species from the group of euprimates, also known as “true” primates. The fossils date to the early Eocene epoch, about 55.8 million years ago, at the same time as a 200,000-year global warming event known as the Paleocene-Eocene Thermal Maximum occurred, Bloch said. Mammals evolved to be smaller during that time, when even- and odd-toed hoofed mammals, distantly related to modern deer and horses, also first appeared in the fossil record. 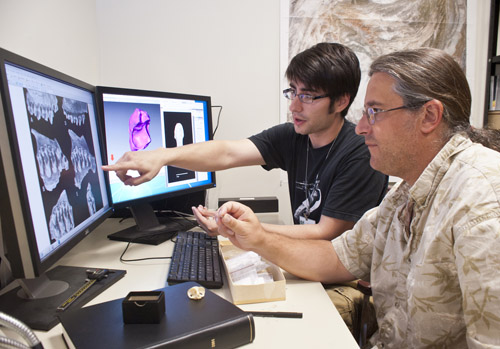 “The appearance of the first modern primates in North America co-occurred with the appearance of other modern mammals such as horses, and it’s all associated with a major global warming event,” said co-author Stephen Chester, a Yale University doctoral student and research associate at UF. “It in part set the stage for what we see today in terms of modern mammalian biodiversity.”

Less than 6 inches long, T. brandti was omnivorous, Bloch said. While archaic primates mostly had claws, some of the characteristics of modern primates include forward-facing eyes, an enlarged brain and nails on all digits.

“They are the smallest true nails known on record, whether living or fossil,” said first author Ken Rose, a professor in the Center for Functional Anatomy & Evolution at Johns Hopkins University School of Medicine. “That certainly doesn’t suggest nails developed with larger bodies.”

Based on the age of the fossils and analyses of Teilhardina species from other parts of the world, researchers were also able to analyze the hypothesis that mammals migrated from Asia into North America. Instead, they likely passed from Asia, through Europe and into North America on high-latitude land connections. 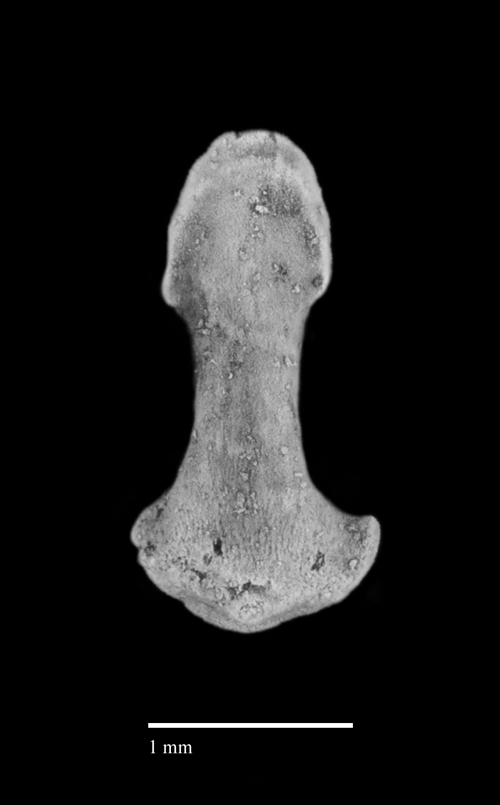 GAINESVILLE, Fla. — A Smithsonian Institution fossil specimen is the terminal phalanx (bone at the tip of the finger) of Teilhardina brandti, showing the oldest evidence of nails in primates – a nail would have rested on the top part of the bone, in this photo taken July 6, 2010. A study published online in the American Journal of Physical Anthropology describes more than 25 fossils of the mammal, which was originally named from a single lower molar. (Photo by Zachary Randall/ Florida Museum of Natural History)

During the Paleocene-Eocene Thermal Maximum, average temperatures were about 15 degrees Fahrenheit higher than today, and the large variety of mammals found in the fossil record from that time remains a mystery to scientists.

“The finding of this animal and the concentrated effort of this period of time might be one of those things where the closer you look, the less you know,” said Gregg Gunnell, director of the Division of Fossil Primates at the Duke Lemur Center. “But any time we have the opportunity to add more morphological information to analyze the relationships of animals to answer these biogeographic questions, we can hopefully get closer and closer to an understanding of what led to this big radiation (diversification) of primates in the first place.”

Study co-authors also include Rachel Dunn of Johns Hopkins University and Doug Boyer of Brooklyn College, City University of New York. The research was supported by the National Science Foundation and Yale University.