NASA Research Confirms it’s a Small World, After All

A NASA-led research team has confirmed what Walt Disney told us all along: Earth really is a small world, after all.

Since Charles Darwin’s time, scientists have speculated that the solid Earth might be expanding or contracting. That was the prevailing belief, until scientists developed the theory of plate tectonics, which explained the large-scale motions of Earth’s lithosphere, or outermost shell. Even with the acceptance of plate tectonics half a century ago, some Earth and space scientists have continued to speculate on Earth’s possible expansion or contraction on various scientific grounds.

Now a new NASA study, published recently in Geophysical Research Letters, has essentially laid those speculations to rest. Using a cadre of space measurement tools and a new data calculation technique, the team detected no statistically significant expansion of the solid Earth.

So why should we care if Mother Nature is growing? After all, Earth’s shape is constantly changing. Tectonic forces such as earthquakes and volcanoes push mountains higher, while erosion and landslides wear them down. In addition, large-scale climate events like El Nino and La Nina redistribute vast water masses among Earth’s ocean, atmosphere and land.

Scientists care because, to put movements of Earth’s crust into proper context, they need a frame of reference to evaluate them against. Any significant change in Earth’s radius will alter our understanding of our planet’s physical processes and is fundamental to the branch of science called geodesy, which seeks to measure Earth’s shape and gravity field, and how they change over time. 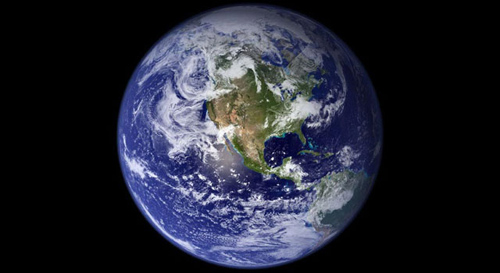 To make these measurements, the global science community established the International Terrestrial Reference Frame. This reference frame is used for ground navigation and for tracking spacecraft in Earth orbit. It is also used to monitor many aspects of global climate change, including sea level rise and its sources; imbalances in ice mass at Earth’s poles; and the continuing rebound of Earth’s surface following the retreat of the massive ice sheets that blanketed much of Earth during the last Ice Age.

But measuring changes in Earth’s size hasn’t exactly been easy for scientists to quite literally “get their arms around.” After all, they can’t just wrap a giant tape measure around Earth’s belly to get a definitive reading. Fortunately, the field of high-precision space geodesy gives scientists tools they can use to estimate changes in Earth’s radius. These include:

Scientists use all these techniques to calculate the International Terrestrial Reference Frame. Central to the reference frame is its point of origin: the precise location of the average center of mass of the total Earth system (the combination of the solid Earth and the fluid envelope of ocean, ice and atmosphere that surrounds it, around which all Earth satellites orbit). Scientists currently determine this origin point based on a quarter century of satellite laser ranging data, considered the most accurate space geodetic tool for this purpose.

But the accuracy of the satellite laser ranging data and all existing space geodesy technologies is contaminated, both by the effects of other major Earth processes, and limited ground measurement sites. Think of it this way: if all of Earth’s GPS stations were located in Norway, their data would indicate that Earth is growing, because high-latitude countries like Norway are still rising in elevation in response to the removal of the weight of Ice Age ice sheets. So how can scientists be sure the reference frame is accurate?

Enter an international group of scientists led by Xiaoping Wu of NASA’s Jet Propulsion Laboratory, Pasadena, Calif., and including participants from the Institut Geographique National, Champs-sur-Marne in France, and Delft University of Technology in The Netherlands. The team set out to independently evaluate the accuracy of the International Terrestrial Reference Frame and shed new light on the Earth expansion/contraction theory.

The team applied a new data calculation technique to estimate the rate of change in the solid Earth’s average radius over time, taking into account the effects of other geophysical processes. The previously discussed geodetic techniques (satellite laser ranging, very-long baseline interferometry and GPS) were used to obtain data on Earth surface movements from a global network of carefully selected sites. These data were then combined with measurements of Earth’s gravity from NASA’s Gravity Recovery and Climate Experiment (GRACE) spacecraft and models of ocean bottom pressure, which help scientists interpret gravity change data over the ocean.

The result? The scientists estimated the average change in Earth’s radius to be 0.004 inches (0.1 millimeters) per year, or about the thickness of a human hair, a rate considered statistically insignificant.

“Our study provides an independent confirmation that the solid Earth is not getting larger at present, within current measurement uncertainties,” said Wu.