Twenty years ago, Calvin Hsia created a list of the “Most Verbose People” on a CompuServe forum that became Microsoft’s Most Valuable Professional program.

Most techies at the time would plug in their modems and dial up CompuServe. In the days before Twitter, Facebook and broadband, CompuServe’s forums were a gathering place for geeks to talk shop and get answers to burning questions.

Calvin Hsia, a developer who lived in Hawaii, thought it might be fun to figure out who posted the most. So he wrote a program that could download, organize and tabulate hundreds of daily forum messages. He then published a list of hundreds of the forum’s “Most Verbose People,” as he liked to call them.

Microsoft saw value in that verbosity, so much so that the members of “Calvin’s List,” along with its creator, became Microsoft’s first Most Valuable Professionals (MVPs).

As part of the launch of the program, the MVP Award was created in 1993 to thank exceptional, independent community leaders who — often verbosely — share their passion, technical expertise and real-world knowledge of Microsoft products with others. This week, as Microsoft celebrates the 20th anniversary of the MVP Award, the original group of 34 award winners has swelled a hundredfold. Hsia was among the attendees who honored the milestone at this week’s MVP Global Summit, not as an award recipient — he became a Microsoft employee 19 years ago — but as a supporter.

“Our MVPs are incredibly important to the company,” said Hsia, a senior software development engineer (SDE) on Microsoft’s Visual Studio team. “They help our customers, they act as beta testers and they give us honest feedback. They’re huge for us.”

He isn’t the only fan. Microsoft CEO Steve Ballmer also expressed his gratitude for the community’s longstanding passion.

“For 20 years, the insight and feedback from the MVP community has helped drive and shape Microsoft’s product advancements,” Ballmer says. “The contributions that MVPs make to technical communities is invaluable, and I deeply appreciate their passion as well as all that they do for our customers.” 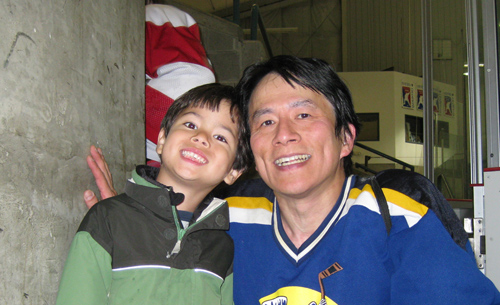 Calvin Hsia, pictured here with his son Tyler, started Microsoft’s MVP program 20 years ago as a simple list of “most verbose” people on a forum. Image credit: Microsoft

This year Microsoft honored 3,800 MVPs across 90 Microsoft technologies. Every day, MVPs reach 1 million customers through social media, in forums, at user group gatherings and as presenters at technology conferences around the world.

“These are our best and most passionate customers, those who take it upon themselves to learn about everything we’re doing, to provide invaluable feedback and to then help the rest of the world discover and make the most of our technologies,” he says. “I view our MVPs as ambassadors to the technologies and work that we do at Microsoft.”

A Dev in Paradise

Hsia didn’t need much to create his original MVP list — just a little code and a dial-up connection via his blisteringly fast (and much bigger than a bread box) US$549 2400 baud modem.

That code helped Hsia stay on top of the 700-plus daily messages posted on the forum for FoxPro, the database program at the heart of his consulting business. At the time, Hsia mostly stayed away from Microsoft products. But after the company began publishing FoxPro, he changed his tune. The company was pouring a lot of resources into improving the database, and Hsia took notice.

Meanwhile, the MVP Award helped him gain a reputation as a FoxPro whiz. If someone posted a question on CompuServe’s forums, Hsia usually had an answer.

That technical expertise attracted attention in Redmond. One day Hsia got a question from a senior Microsoft executive: did he want a job at Microsoft? He handed the phone to “the boss” — aka his wife — who listened for 30 seconds, said “No thanks,” and hung up.

“We live in Hawaii!” she said.

The young couple eventually changed their minds and made the move to the Seattle area. Hsia became an SDE working on FoxPro. He continued to maintain “Calvin’s List,” but the conversation soon drifted from CompuServe to other forums and websites. Today, he ranks the top MSDN and TechNet blogs.

Hsia also stayed in touch with the MVP community, listening to their feedback about the various products he worked on throughout his career. They really are Microsoft’s most valuable — and verbose — external community, he says, and over the years they have played a big part in changing public perception of “big, bad Microsoft” among customers.

“Our MVPs — they’re out there trying to help our customers every day,” Hsia says. “And in doing that, they really help us.”

Hsia himself perhaps best articulated the value and spirit of MVPs 20 years ago, when CompuServe Magazine profiled him shortly after winning his award: “I know how difficult it is for an independent developer to see all angles to a problem, and I know how nice it is to receive a reply with a solution. It’s extremely gratifying to know that I’ve helped solve somebody’s problem.”