Good mental health and clear thinking depend upon our ability to store and manipulate thoughts on a sort of “mental sketch pad.” In a new study, Yale School of Medicine researchers describe the molecular basis of this ability — the hallmark of human cognition — and describe how a breakdown of the system contributes to diseases such as schizophrenia and Alzheimer’s disease.

“Insults to these highly evolved cortical circuits impair the ability to create and maintain our mental representations of the world, which is the basis of higher cognition,” said Amy Arnsten, professor of neurobiology and senior author of the paper published in the Feb. 20 issue of the journal Neuron.

High-order thinking depends upon our ability to generate mental representations in our brains without any sensory stimulation from the environment. These cognitive abilities arise from highly evolved circuits in the prefrontal cortex. Mathematical models by former Yale neurobiologist Xiao-Jing Wang, now of New York University, predicted that in order to maintain these visual representations the prefrontal cortex must rely on a family of receptors that allow for slow, steady firing of neurons. The Yale scientists show that NMDA-NR2B receptors involved in glutamate signaling regulate this neuronal firing.  These receptors, studied at Yale for more than a decade, are responsible for activity of highly evolved brain circuits found especially in primates. 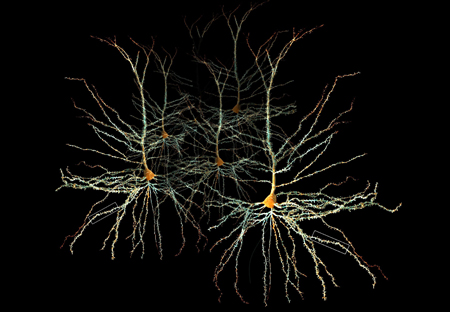 Earlier studies have shown these types of NMDA receptors are often altered in patients with schizophrenia. The Neuron study suggests that those suffering from the disease may be unable to hold onto a stable view of the world. Also, these receptors seem to be altered in Alzheimer’s patients, which may contribute to the cognitive deficits of dementia.

The lab of Dr. John Krystal, chair of the department of psychiatry at Yale, has found that the anesthetic ketamine, abused as a street drug, blocks NMDA receptors and can mimic some of the symptoms of schizophrenia. The current study in Neuron shows that ketamine may reduce the firing of the same higher-order neural circuits that are decimated in schizophrenia.

“Identifying the receptor needed for higher cognition may help us to understand why certain genetic insults lead to cognitive impairment and will help us to develop strategies for treating these debilitating disorders,” Arnsten said.