The Chicago Harris stop on Dec. 3 kicked off a weeklong trip for the delegates to Washington D.C. and Chicago as part of the congressionally sponsored Open World Program. The goal was to expose the legislators, who are all municipal council deputies in Moscow, to American best practices in local governance.

George Palamattam, the executive director of the Council of International Programs Chicago, which helped organize the trip, said Chicago Harris was a natural place to start, laying the foundation for the rest of the trip.

“Chicago Harris has outstanding faculty who have excellent experience on topics the delegation wanted to learn,” said Palamattam.

Insight into U.S. governance and politics

The Russian delegates visited the United States hoping to learn new ways to handle issues that face cities in both countries, from traffic and crime, to accountability and political participation.

“Our objective is first of all to learn how the political system at the state, regional, and local levels works in the United States and how the problems that are being faced at these levels are being solved,” said Municipal Deputy Andrey Ambartsumov. The delegates also met with administrators who serve the City of Chicago, Cook County, Skokie, the Center for Tax and Budget Accountability and the League of Women Voters. 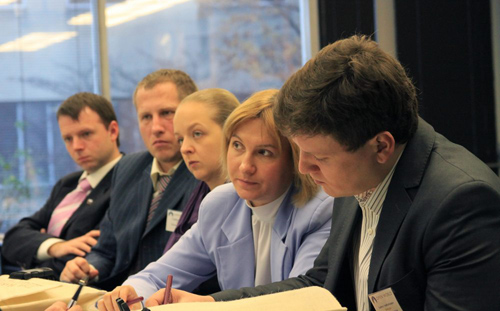 Several Chicago Harris experts led discussions with the visiting Russians, including Senior Lecturer Paula Worthington and Associate Professor Chris Berry. Worthington talked about the complications that arise from having almost 90,000 units of government in the United States—from cities and counties to park districts and waste management authorities—while Berry described the looming public pension shortfall threatening many cities and states, currently underfunded nation-wide by between $2 and 4 trillion.

The Russian delegates were surprised not only by the effectiveness of the door-to-door method but also that American political parties are able to find large enough numbers of volunteers to do the work.

“I wanted to know how we can wake up our society to involve them in the management in our country,” said Vladimir Garnachuk, a municipal deputy in Moscow. “People don’t like authorities. They don’t trust them. It is a very big problem. A low percentage comes to the elections. As a result, people don’t understand how they can influence power. I [am trying] to change this, but it is very difficult.”

The municipal council deputies in Moscow are elected, unpaid positions that serve districts of about 100,000 people. Ambastsumov and Garnachuk explained that while their official duties are to help pass urban laws and to sit on commissions, their unofficial duties are to try to influence local authorities to enhance the well-being of their neighbors and to try to increase citizen participation in local issues.

“I was most surprised by the amount of participation of the citizens in solving the problems of their communities,” said Ambartsumov of what he learned at Chicago Harris. “I was surprised to know how many people do it and do it for free, not only in political campaigns but volunteers in local government, too. My objective is to inspire people [in Moscow] to participate in the process, and to inspire local authorities to do more than they do now.”

Delegates also were nonplussed that U.S. candidates openly criticize their opponents, a practice that is against the law in Russia, but, said Allard, is used very effectively in the United States.

“Negative ads tend to have more truthful information than positive ones,” said Allard, although he noted that U.S. voters prefer positive campaigns. “If you want to see actual facts in American campaign advertising, look for the negative ads.”

Palamattam, who led the delegation around Chicago, also mentioned that the opportunity to interact with students was a major factor in selecting Chicago Harris. The delegates ended their day answering questions from students about their work, the hurdles they encounter and why they wanted to come to Chicago Harris and the United States, more generally.

“Direct open dialogue helps us understand each other,” said Municipal Deputy Maksim Motim. “The more we do this, the better.”