More Power to the Cranberry: Study Shows the Juice is Better than Extracts at Fighting Bacterial Infections

With scientific evidence now supporting the age-old wisdom that cranberries, whether in sauce or as juice, prevent urinary tract infections, people have wondered if there was an element of the berry that, if extracted and condensed, perhaps in pill form, would be as effective as drinking the juice or eating cranberry sauce. A new study from researchers at Worcester Polytechnic Institute helps to answer that question.

The study tested proanthocyanidins or PACs, a group of flavonoids found in cranberries.  Because they were thought to be the ingredient that gives the juice its infection-fighting properties, PACs have been considered a hopeful target for an effective extract. The new WPI report, however, shows that cranberry juice, itself, is far better at preventing biofilm formation, which is the precursor of infection, than PACs alone. The data is reported in the paper “Impact of Cranberry Juice and Proanthocyanidins on the Ability of Escherichia coli to Form Biofilms,” which will be published on-line, ahead of print, Oct. 31, 2011, by the journal Food Science and Biotechnology. 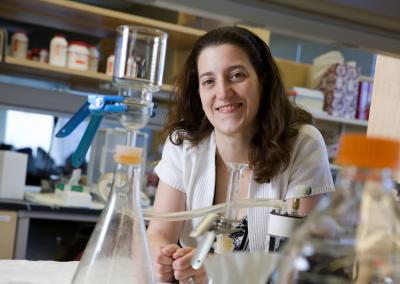 “What we have shown is that cranberry juice’s ability to prevent biofilms is more complex than we may have originally thought,” said Terri Camesano, professor of chemical engineering at WPI and senior author on the paper. “For a while, the field focused on these PACs, but the data shows that they aren’t the silver bullet.”

Camesano’s lab explores the mechanisms that the virulent form of E. coli bacteria, the primary cause of most urinary tract infections (UTIs) in people, uses to form biofilms. This strain of E. coli is covered with small hair-like projections known as fimbriae that act like hooks and latch onto cells that line the urinary tract. When enough of the virulent bacteria adhere to cells, they form a biofilm and cause an infection. Previous work by Camesano’s lab has shown that exposure to cranberry juice causes the fimbriae on E. coli to curl up, reducing their ability to attach to urinary tract cells.

In the new study, Camesano’s team, which included graduate student Paola Andrea Pinzón-Arango and intern Kerrie Holguin, incubated two different strains of E. coli in the presence of two different mixtures of commercially available cranberry juice cocktail. They also incubated the bacteria separately in the presence of PACs, but not juice. While the juice cultures completely prevented biofilm formation, the PACs showed only limited ability to reduce biofilm formation, and only after extended exposure to the E. coli.

“Cranberries have been recognized for their health benefits for a number of years, especially in the prevention of UTIs,” the authors write in the new paper. “While the mechanisms of action of cranberry products on bacterial adhesion and biofilm formation are not fully understood…this study shows that cranberry juice is better at inhibiting biofilm formation than isolated A-type cranberry flavonoids and PACs, although the reasons for this are not yet clear.”

The research detailed in the current study was supported by grants from the National Institutes of Health, the National Science Foundation, the Cranberry Institute, and the Wisconsin Cranberry Board.