REDMOND, Wash. — Natural User Interfaces (NUI), such as touch, have been in development for years, but only recently have become a mainstream reality. Touch user interfaces have made computing more interactive, easier to use and more pervasive than ever, whether on a laptop, all-in-one PC or mobile phone.

In fact, over the past few years, the ability to control mobile phones, for example, with spot-on voice recognition or with simple touch gestures has redefined an industry.

Extending input with touch-first capabilities can make life easier, enabling brand-new experiences and scenarios that have become a consumer expectation. Few companies have the pedigree to fulfill this new demand, but Samsung Electronics had this foresight, leveraging its display expertise across many of its consumer product categories, to lead this new era in computing. Touch computing is now fully integrated into a variety of Samsung computing products, including PCs, slates, mobile phones and Microsoft Surface devices. Using Microsoft platform assets, Samsung expands personal computing capabilities with a touch of the finger. 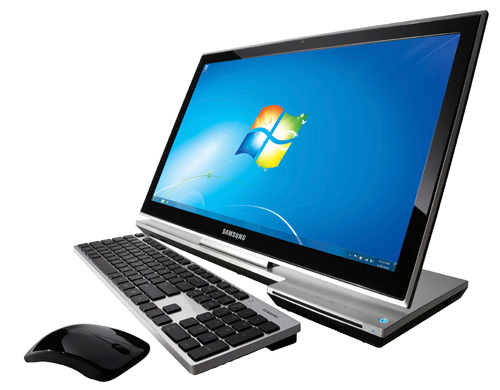 The Samsung Series 7 All-in-One PC redefines the desktop PC. Touch-enabled, the brilliant, 16mm-thick, 23-inch LED display tilts to create a horizontal interface for gaming, art and design projects. With the Intel Core i3 or i5 processor and Windows 7 Home Premium, this PC for work and play starts at $999. Image credit: Microsoft

According to Todd Bouman, director of Enterprise Business Division product marketing at Samsung, this fall will get even more exciting for customers with the new Samsung Series 7 family of products. It’s Bouman’s job to help envision the company’s strategy for developing its premium PC brand. The company recently launched the Samsung Series 7 Slate PC and the Samsung Series 7 All-in-One PC, which is part tablet and part desktop.

“We have an appetite to do some innovative things and to make a name for ourselves, and we’ve been able to do this with some very cool designs for the Microsoft platform,” Bouman says. “These are beautiful, thin products that quite frankly are milestones in the industry.” 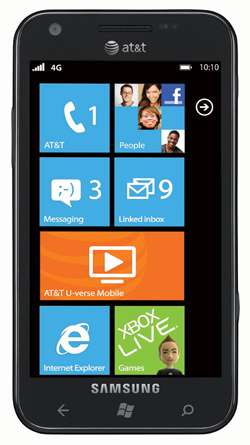 The Samsung Focus S takes the success of the original Focus to the next level with a 4.3-inch Super AMOLED Plus display, a 1.4 GHz processor, 4G speeds and a super-thin profile. It also includes front and rear facing cameras to capture a special moment or connect with friends. Image credit: Microsoft

Bouman says the Series 7 Slate PC represents what the industry has been looking for in a Windows tablet experience — a responsive, fast, lightweight machine with a great screen and all the productivity users expect from a PC.

“We believe a slate should not only be a consumption device, but should also bring you the full power of creation; this is what the future holds for this space,” he says. “It’s also a content-sharing platform for the home, on the go and potentially up in the cloud. We’re really just at the tip of the iceberg.”

Adding to this view and announced just this month, the Samsung Series 7 All-in-One PC extends yet another dimension to Samsung’s vision with a touch-enabled platform that easily anchors the home. The new All-in-One PC is unique in that its TV-like 23-inch display tilts horizontally to lie flat for games, collaboration, video conferences and the like. “It’s really a fun design with next-generation thinking,” Bouman says.

“We think this can be a great segment for the home and office going forward,” he says. “Adding a device like the new All-in-One PC provides a fantastic hardware structure as the center for us to develop new and innovative products around.”

The Series 7 line builds on a combination of factors that have proved successful for Samsung’s mobile line, integrating touch across a variety of its devices. Finding the right display technology, processors, batteries and applications, and then integrating and optimizing them tightly with the underlying software platform in a slick, attractive package proved to be challenging.

It’s a set of challenges that Nick DiCarlo, vice president of Product Planning for Samsung Telecommunications Americas, knows well. DiCarlo’s group keeps a close eye on new software and the experiences it can enable for Samsung’s smartphone products. He says a key in driving Samsung’s transformation into a leader in the smartphone market is collaboration with Microsoft, whose software enables the kinds of use cases consumers want, which Samsung can then optimize to full potential.

“Consumers want a smartphone that works simply and effortlessly,” DiCarlo says. “With Windows Phone, the user interface is bold, clean and really easy to learn”

He points to the Samsung Focus line of mobile phones as prime examples. Building on the success of its first-generation Focus, Samsung was able to address two different consumer segments with the new Samsung Focus S for premium users and the Samsung Focus Flash for the value-conscious, both of which will support the latest version of Windows Phone. 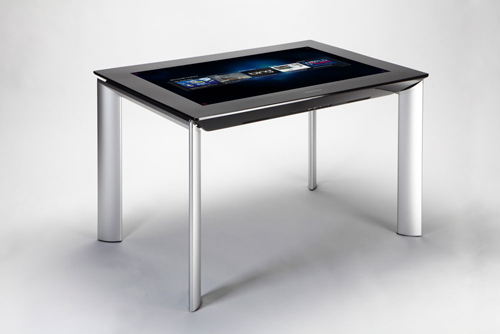 Once a science-fiction dream, the Samsung SUR40 for Microsoft Surface makes “together computing” real. This commercial-use device has an intuitive touch interface, PixelSense technology, and an display that recognizes real-world objects. Expect it in hotels, airports and other settings as soon as next year. Image credit: Microsoft

They also sport very high-quality cameras, both front and back, for exceptional image quality and collaboration capabilities such as video chat.

Beyond the hardware, though, consumers are keenly interested in what the device can do. And that, says DiCarlo, is where the software comes in.

“In working closely with Microsoft, we’ve been able to realize the full set of experiences, including Facebook integration, and some really powerful location-based services,” DiCarlo says. “A lot of the ideas are basic, but the execution is elegant and we have a lot of appreciation for that. The Windows Phone Platform, especially Windows Phone 7.5, is really poised to break out. Millions of consumers are buying their first smartphone this holiday season, and the family of Focus-branded devices, exclusively with AT&T, is really the perfect set of devices to amaze your family with their power, beauty and simplicity.”

Optimizing the way hardware and software interact takes some work, and both Microsoft and Samsung remain committed to this effort across Samsung’s computing products. During development of the Series 7 PCs, for example, Samsung worked daily with Microsoft to make sure the software maximized the hardware’s touch potential, and to enable new features, such as Samsung’s Fast Start technology that boots the PC up in two seconds flat from a hybrid sleep.

“We see the vision and all these benefits in preparing for next-generation platforms,” Bouman says. “Making the most of those benefits starts with building the right hardware for Windows 7 today, with the full support of Microsoft.”

The work is so important that Microsoft has an entire group dedicated to collaborating with manufacturers such as Samsung. Greg Taylor, group partner technology manager for Microsoft OEM Engineering, works with Samsung to push computing boundaries and deliver innovative products.

“Samsung allows us to have a very early look into their concepts and ideas,” says Taylor. “We examine those concepts against the scenarios we enable, and make sure the product aligns tightly with that vision.”

For the Series 7, Taylor’s group has been working with Samsung for the past two years on creative designs that bring great touch experiences to customers.

“Users want the touch screen to feel organic,” he says. “They want it to feel alive. We worked together to bring that feeling to the Series 7 PCs. When you use touch to drive the software experience, it’s very smooth and fluid.”

Announced at CES 2011 and designed for commercial environments, Samsung’s SUR40 for Microsoft Surface bonds context-aware and “together computing” principles to elevate decision-making and entertainment.

Samsung and Microsoft worked closely on their respective hardware and software for this upcoming product, combining advanced image-sensing technology, cutting-edge multi-touch capabilities and enhanced horizontal durability, which are specialized for the Microsoft Surface experience. The software and hardware solution makes it possible for people to share, collaborate and explore together using a large, thin display that recognizes fingers, hands and other objects placed on it. This pioneering computing scenario recognizes what’s touching the LCD display, and that information is immediately processed and interpreted, providing users with contextually accurate information.

“As more and more people are using smartphones and tablet devices, intuitive touch-based user experiences have become the norm,” Bouman says. “Our close hardware and software collaboration with Microsoft for the development of the SUR40 allows us to expand the user experience with the largest massive multi-touch display, meeting the needs of multiple users at once with the ability to recognize multiple objects at the same time.”

Companies from around the world, including Dassault Aviation, Fujifilm and Royal Bank of Canada, all of whom have announced their deployments, appreciate the tight collaboration between Microsoft and Samsung, enabling Samsung’s SUR40 to advance consumer decision-making and elevate entertainment experiences.

With the Samsung Focus mobile phone already on store shelves, the Series 7 line due later this fall, and other products such as the SUR40 for Microsoft Surface on the horizon, the collaboration between Microsoft and Samsung has proven a successful formula for bringing innovative computing scenarios to life. And if Samsung’s Focus phones are any indication, the approach to collaborative innovation is paying off: The Samsung Focus ranked No. 1 in a customer survey conducted by Equation Research and PC Magazine this year, landing the coveted PC Magazine Reader’s Choice Award.

According to Samsung’s DiCarlo, there’s much more of that to come: “We haven’t even played the first inning yet, and that’s exciting.”