A new study reports that the small intestine uses more cells than scientists had realized to absorb microspheres large enough to contain therapeutic protein drugs, such as insulin. The finding in rats, published in the Proceedings of the National Academy of Sciences, is potentially good news for developing a means for oral delivery of such drugs.

PROVIDENCE, R.I. [Brown University] — The small intestine employs more cells and mechanisms than scientists previously thought to absorb relatively large particles, such as those that could encapsulate protein-based therapeutics like insulin, according to a new study. The findings, published the week of Aug. 5, 2013, in the Proceedings of the National Academy of Sciences, open another window for drug makers to increase absorption of medicines taken by mouth.

Scientists at Brown University and Wayne State University worked with rats to quantify the intestinal absorption and distribution around the body of polystyrene spheres ranging between 0.5 and 5 micrometers in diameter. They found that a substantial portion of the absorption occurs via the process of endocytosis in cells called enterocytes. The conventional wisdom had long been that particles of that size would only be absorbed by phagocytosis in “microfold,” or M, cells, which compose less than 1 percent of the absorptive intestinal lining.

“Data from these studies challenge current dogma in the area of oral drug delivery,” wrote the scientists including lead authors Joshua Reineke, a Brown graduate now a professor at Wayne State, and Daniel Cho, a student in the Warren Alpert Medical School of Brown University. 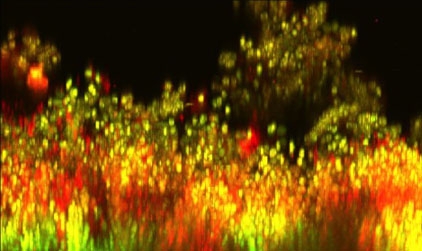 Microspheres (red) permeate the intestinal lining (green) on their way to the bloodstream in this image taken with a two-photon microscope. Eventually, microspheres could carry medication to targeted sites within the body. Image credit: Mathiowitz lab/Brown University

With this new insight — especially if it can be expanded, replicated, and shown in people — drug designers could consider targeting future biodegradable drug-containing microspheres to reach enterocytes in addition to M cells, said corresponding author Edith Mathiowitz, professor of medical science and engineering at Brown.

“You can design it so that it will be directed there,” Mathiowitz said. “This is basically what my future work probably will be.”

Mathiowitz’s research is focused on discovering a means by which protein-based drugs, which currently have to be injected, could be swallowed, survive the harsh environment of the stomach, become absorbed as much as possible in the intestine, and reach the tissues where they can release their therapeutic cargo. Earlier this summer Mathiowitz published a paper showing that a polymer coating that survives stomach acids also increases intestinal uptake of microspheres. In 2011 she described a system for holding a capsule in place at desired locations of the intestine using magnets.

The new research in PNAS helps explain where and how microspheres are absorbed by the intestine.

The researchers performed several experiments to track micropshere absorption in the rat models. For some rats they administered the spheres by mouth. In other rats they injected them directly into one or the other of the intestine’s main sections: the ileum and the jejunum. Among the rats they also varied the sphere sizes. After waiting an hour or five hours, they tracked down the spheres to see how many were absorbed and what tissues they had reached.

Across the many combinations of size, location, means of administration and time, the intestines took up between 10 and 50 percent of spheres. Although by no means evenly, in each case the bloodstream distributed absorbed spheres to a wide variety of tissues including the brain and lungs, and more commonly, the liver.

Via microscopes the researchers could see red-fluorescing microspheres passing through enterocytes. Further, more systematic evidence for the role of enterocytes and their absorption via endocytosis came from another experiment where researchers used a variety of agents that block endocytosis.

When they did so, as for instance with 1-micrometer spheres in the ileum, where both M cells and enterocytes can be found, absorption dropped to between 5 and 15 percent of spheres from more than 32 percent in rats where the process was not blocked (an agent that blocked both endocytosis and phagocytosis blocked the most). Absorption dropped even more dramatically in the jejunum, where there are no M cells, falling to a range between 3 and 10 percent, compared to more than 45 percent in rats with normal endocytosis. Enterocytes may therefore play not only an important role, but perhaps a bigger role than M cells.

“We need to know what the intestine is doing and where the particles go,” Mathiowitz said. “This is the first time that we have quantified the process as well as documented biodistribution to specific organs. In order to be able to consider and translate the technology to humans, we also need to verify the reproducibility of the process in different animal species.”

Advancing these studies might not only improve drug delivery, Mathiowitz noted, but could lead to ways to prevent absorption of harmful substances. It could at least aid toxicology research to know that more intestinal cells than just M cells can take up particles greater than a micrometer in diameter.

In addition to Reineke, Cho, and Mathiowitz, other authors on the paper were Yu-Ting Dingle, A. Peter Morello III, Jules Jacob, and Christopher Thanos, all of Brown.