Moral Dilemma: Would You Kill One Person to Save Five?

EAST LANSING, Mich. — Imagine a runaway boxcar heading toward five people who can’t escape its path. Now imagine you had the power to reroute the boxcar onto different tracks with only one person along that route.

Would you do it?

That’s the moral dilemma posed by a team of Michigan State University researchers in a first-of-its-kind study published in the research journal Emotion. Research participants were put in a three dimensional setting and given the power to kill one person (in this case, a realistic digital character) to save five.

The results? About 90 percent of the participants pulled a switch to reroute the boxcar, suggesting people are willing to violate a moral rule if it means minimizing harm. 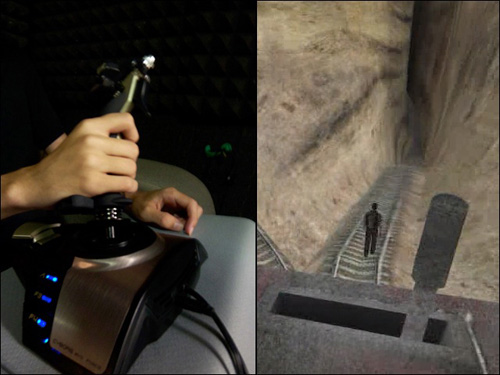 A joystick gave participants the option of switching the boxcar onto a separate set of tracks with one hiker instead of five. Image credit: Michigan State University

“What we found is that the rule of ‘Thou shalt not kill’ can be overcome by considerations of the greater good,” said Carlos David Navarrete, lead researcher on the project.

As an evolutionary psychologist, Navarrete explores big-picture topics such as morality – in other words, how do we come to our moral judgments and does our behavior follow suit? 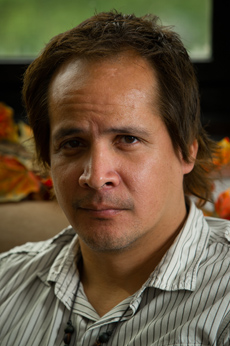 His latest experiment offers a new twist on the “trolley problem,” a moral dilemma that philosophers have contemplated for decades. But this is the first time the dilemma has been posed as a behavioral experiment in a virtual environment, “with the sights, sounds and consequences of our actions thrown into stark relief,” the study says.

The research participants were presented with a 3-D simulated version of the classic dilemma though a head-mounted device. Sensors were attached to their fingertips to monitor emotional arousal.

In the virtual world, each participant was stationed at a railroad switch where two sets of tracks veered off. Up ahead and to their right, five people hiked along the tracks in a steep ravine that prevented escape. On the opposite side, a single person hiked along in the same setting.

As the boxcar approached over the horizon, the participants could either do nothing – letting the coal-filled boxcar go along its route and kill the five hikers – or pull a switch (in this case a joystick) and reroute it to the tracks occupied by the single hiker.

The findings are consistent with past research that was not virtual-based, Navarrete said.

The study also found that participants who did not pull the switch were more emotionally aroused. The reasons for this are unknown, although it may be because people freeze up during highly anxious moments – akin to a solider failing to fire his weapon in battle, Navarrete said.

“I think humans have an aversion to harming others that needs to be overridden by something,” Navarrete said. “By rational thinking we can sometimes override it – by thinking about the people we will save, for example. But for some people, that increase in anxiety may be so overpowering that they don’t make the utilitarian choice, the choice for the greater good.”

A 2-D example of the virtual environment used in this study is available at www.cdnresearch.net/vr