A milestone has been reached on the road to developing advanced biofuels that can replace gasoline, diesel and jet fuels with a domestically-produced clean, green, renewable alternative.

Researchers with the U.S. Department of Energy (DOE)’s Joint BioEnergy Institute (JBEI) have engineered the first strains of  Escherichia coli bacteria that can digest switchgrass biomass and synthesize its sugars into all three of those transportation fuels. What’s more, the microbes are able to do this without any help from enzyme additives.

“This work shows that we can reduce one of the most expensive parts of the biofuel production process, the addition of enzymes to depolymerize cellulose and hemicellulose into fermentable sugars,” says Jay Keasling, CEO of JBEI and leader of this research. “This will enable us to reduce fuel production costs by consolidating two steps – depolymerizing cellulose and hemicellulose into sugars, and fermenting the sugars into fuels – into a single step or one pot operation.” 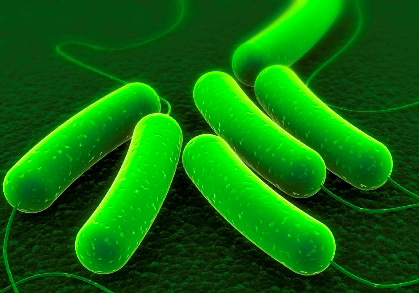 Keasling, who also holds appointments with the Lawrence Berkeley National Laboratory (Berkeley Lab) and the University of California (UC) Berkley, is the corresponding author of a paper in the Proceedings of the National Academy of Sciences (PNAS) that describes this work. The paper is titled “Synthesis of three advanced biofuels from ionic liquid-pretreated switchgrass using engineered Escherichia coli.”

Advanced biofuels made from the lignocellulosic biomass of non-food crops and agricultural waste are widely believed to represent the best source of renewable liquid transportation fuels. Unlike ethanol, which in this country is produced from corn starch, these advanced biofuels can replace gasoline on a gallon-for-gallon basis, and they can be used in today’s engines and infrastructures. The biggest roadblock to an advanced biofuels highway is bringing the cost of producing these fuels down so that they are economically competitive. 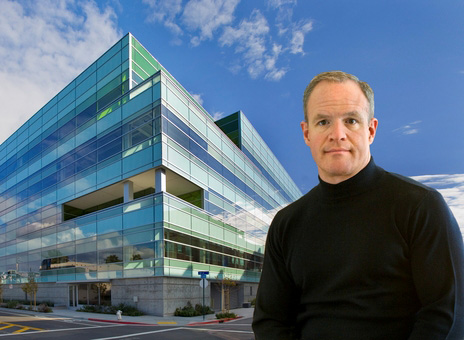 Unlike the simple sugars in corn grain, the cellulose and hemicellulose in plant biomass are difficult to extract in part because they are embedded in a tough woody material called lignin. Once extracted, these complex sugars must first be converted or hydrolyzed into simple sugars and then synthesized into fuels. At JBEI, a DOE Bioenergy Research Center led by Berkeley Lab, one approach has been to pre-treat the biomass with an ionic liquid (molten salt) to dissolve it, then engineer a single microorganism that can both digest the dissolved  biomass and produce hydrocarbons that have the properties of petrochemical fuels.

“Our goal has been to put as much chemistry as we can into microbes,” Keasling says. “For advanced biofuels this requires a microbe with pathways for hydrocarbon production and the biomass-degrading capacity to secrete enzymes that efficiently hydrolyze cellulose and hemicellulose. We’ve now been able to engineer strains of Escherichia coli that can utilize both the cellulose and hemicellulose fractions of switchgrass that’s been pre-treated with ionic liquids.” 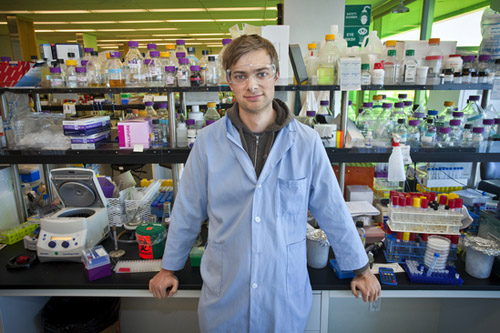 E. coli bacteria normally cannot grow on switchgrass, but JBEI researchers engineered strains of the bacteria to express several enzymes that enable them to digest cellulose and hemicellulose and use one or the other for growth. These cellulolytic and hemicellulolytic strains of E. coli, which can be combined as co-cultures on a sample of switchgrass, were further engineered with three metabolic pathways that enabled the E. coli to produce fuel substitute or precursor molecules suitable for gasoline, diesel and jet engines. While this is not the first demonstration of E. coli producing gasoline and diesel from sugars, it is the first demonstration of E. coli producing all three forms of transportation fuels. Furthermore, it was done using switchgrass, which is among the most highly touted of the potential feedstocks for advanced biofuels.

Gregory Bokinsky, a post-doctoral researcher with JBEI’s synthetic biology group and lead author of the PNAS paper, explains that the pre-treatment of the switchgrass with ionic liquids was essential to this demonstration. 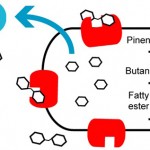 The JBEI researchers also attribute the success of this work to the “unparalleled genetic and metabolic tractability” of E. coli, which over the years has been engineered to produce a wide range of chemical products. However, the researchers believe that the techniques used in this demonstration should also be readily adapted to other microbes. This would open the door to the production of advanced biofuels from lignocellulosic feedstocks that are ecologically and economically appropriate to grow and harvest anywhere in the world. For the JBEI researchers, however, the next step is to increase the yields of the fuels they can synthesize from switchgrass.

“We already have hydrocarbon fuel production pathways that give far better yields than what we obtained with this demonstration,” says Bokinsky. “And these other pathways are very likely to be compatible with the biomass-consumption pathways we’ve engineered into our E. coli. However, we need to find enzymes that can both digest more of the ionic liquid pre-treated biomass and be secreted by E coli. We also need to work on optimizing the ionic liquid pre-treatment steps to yield biomass that is even easier for the microbes to digest.”

This research was supported in part by the DOE Office of Science and a UC Discovery Grant.