Monogamous Birds….Peeping on the Neighbours!

It is well documented that male birds seduce females using their songs, colourful plumage and courtship dances. These signals reflect male genetic quality and will be graded by the female to determine a male’s potential as a mate. The stronger the grade, the better the odds of being selected.

But this basic rule isn’t the only yardstick used by females. As surprising as it seems, birds know how to use data from their social environment to maximize their chances of reproduction.  Frédérique Dubois, a professor at the Université de Montréal Department of Biological Sciences, has already demonstrated that female Zebra Finches will favour a male chosen by another female. Dubois refers to this as imitation and the use of “public information” in choosing a mate.

In a new experiment she conducted with PhD student Dominique Drullion, she pushed her imitation behaviour observations even further. They discovered that following a breeding failure, a female Zebra Finch will select a new male she knows has already produced an abundant brood.

Checking out the neighbour
The Zebra Finch is a seasonally monogamous species: the male and female are a couple throughout the incubation period and both contribute to the feeding of the offspring but the couples change every season. 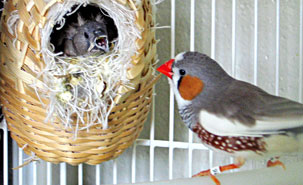 Thie male zebra finch is at the head of a very large household - his reproductive success will be a factor the females will take into consideration when the time comes for them to choose their next partner. Image credit: Dominique Drullion

For the purpose of the experiment, Dubois and Drullion manipulated the eggs of 18 Zebra Finch couples to generate successful pairs and unsuccessful pairs (by using sterile eggs). They were placed in double cages, which allowed every bird to know whether the neighbour’s breeding was successful or unsuccessful. In a laboratory, the reproduction period can be triggered at any time by changing lighting and feeding conditions.

After seven weeks, when all females had laid eggs and the young were independent, the researchers measured how much attention females gave their breeding partner comparatively to the attention they gave the neighbour by recreating mating conditions. The preference of the female was determined by how much time she spent with each male and how she reacted to their respective courtship dances.

This means that females know how to use the social information they have. They also know how to identify each individual based on his plumage, the shade of his beak and his song, and can correlate that individual to his previous brood.

“In nature, Zebra Finches live in large communities and they all reproduce at the same time,” says Dubois. “The birds can therefore witness the success and failures of other couples and use this information to benefit sexual selection. If other couples fail, there is no advantage in divorcing seeing as the causes of the failure could result from the environment. However, if under the same conditions, the neighbour is successful, it means he is a good mate and worth choosing.”

In her opinion, these results can be extrapolated to other monogamous bird species and explain why breeding failure doesn’t always result in divorce.

This experiment doesn’t assume that success or failure is solely dependant on the male. The protocol was conceived based on the fact that females are more selective than males. But the study could be reproduced controlling male preferences.

More males, more testosterone
The experiment highlights another unique feature of female selection: both successful and unsuccessful females prefer males that produce a larger proportion of sons! This discrimination is possible seeing as males have a distinguishable plumage.

The study was published in the December 2011 issue of PloS ONE.