A device designed by engineers at the Georgia Tech Research Institute (GTRI) is part of the Hurricane Imaging Radiometer (HIRAD), an experimental airborne system developed by the Earth Science Office at the NASA Marshall Space Flight Center in Alabama.

Known as an analog beam-former, the GTRI device is part of the radiometer, which is being tested by NASA on a Global Hawk unmanned aerial vehicle. The radiometer measures microwave radiation emitted by the sea foam that is produced when high winds blow across ocean waves. By measuring the electromagnetic radiation, scientists can remotely assess surface wind speeds at multiple locations within the hurricanes.

HIRAD could provide detailed information about the wind speeds and rain intensity inside hurricanes without the need to fly manned aircraft through the storms. In addition to the beam-former design, GTRI researchers also provided assistance to NASA with improvements aimed at a potential future, more advanced version of the radiometer.

“Improved knowledge of the wind speed field will enable the National Hurricane Center to better characterize the storm’s intensity,” explained Timothy Miller, Research and Analysis Team Lead for the Earth Science Office at the NASA Marshall Space Flight Center. “Better forecasts of storm intensity and structure will enable better warnings of such important factors as wind strength and storm surge. That would allow businesses and residents to prepare with more confidence in their knowledge of what is coming.” 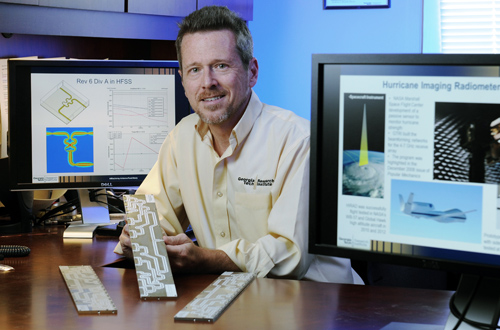 Glenn Hopkins, a GTRI research engineer, displays examples of the beam-formers designed by GTRI for use on the hurricane imaging radiometer now being tested by NASA. (GT Photo by: Gary Meek)

HIRAD was flown above two hurricanes in 2010 and a Pacific frontal system in 2012. Data it gathered on wind and rain will be provided to the scientific community for use in numerical modeling, and could also guide development of a next-generation system that would provide information on wind direction in addition to measuring wind speed and rain intensity.

“We have verified the instrument concept in terms of sensitivity to wind speed and rain rate,” Miller said. “We have also learned a lot about the factors that need to be considered in developing calibrated images from the flight data. That work is still ongoing.”

GTRI researchers supported development of the radiometer with design of the beam-formers, which are part of the radiometer’s array antenna. The array antenna gathers microwave signals from the ocean and the GTRI-designed devices – several of which are required – form “fan” beams of electromagnetic energy across the ground path of the aircraft’s travel. The resulting signals are then fed into sensitive receivers developed by researchers at the University of Michigan and ProSensing, Inc., a Massachusetts company.

“There are different ways to build antennas to solve this problem, but array antennas provide multi-channel capability and greater sensitivity,” said Glenn Hopkins, a research engineer who headed up the GTRI design work. “Because this system is passive – it doesn’t send out radiation – we need to have maximum sensitivity and a focus on minimizing noise in the system.”

The HIRAD system, also known technically as a microwave synthetic aperture radiometer, is designed to operate in the microwave spectrum, from about 4 gigahertz to 7 gigahertz. Discrete parts of that range are used to enable discrimination between ocean surface emission and that from the rain located between the instrument and the surface.

The HIRAD instrument arrives in the hanger for a mission. David Simmons, a scientist from the University of Alabama in Huntsville, is inspecting HIRAD before installation in the Global Hawk. (Image credit: NASA)

“On the aircraft, the instrument would be flying a track over the storm, with a multitude of simultaneous beams,” explained Hopkins. “We would be pixelating the surface and could determine what radiation is coming from each area to generate a map of the intensity of the wind speeds as we fly over the storm.”

Beyond supporting the radiometer’s need for high sensitivity and low noise, the component also had to be as small and light as possible to be part of the Global Hawk payload. The GTRI design was manufactured by an outside company, and integrated directly onto the back of the instrument’s antenna. The circuitry is just 20 one-thousandths of an inch thick, printed on flexible circuit materials.

“This project is an example of the kinds of work we have been doing for the Department of Defense, and we’re pleased that this technology can be transitioned to assist with weather prediction and research,” Hopkins said.

“One key challenge in the array study was to use the same footprint as the single polarization array,” said Jim Maloney, a GTRI principal research engineer. “Prototype dual polarization arrays were built and measured to confirm the ability of GTRI’s fragmented antenna technology to meet the bandwidth and form factor requirements.”

The HIRAD is installed on a NASA Global Hawk aircraft. (Image credit: NASA)

The Global Hawk can fly at altitudes of more than 60,000 feet, and can stay in the air for as long as 31 hours, allowing it to remain in the hurricane area as much as four times longer than piloted aircraft now used for monitoring hurricanes. It provides data that is more detailed than what satellites could provide.

“A UAV is able to stay over the storm for much longer,” Miller noted. “Compared to a satellite, the UAV observations are of much higher spatial resolution, and depending on the satellite’s orbit, generally of a much longer time period. A satellite instrument would be able to observe storms continually, over a much larger area, but would provide much coarser spatial resolution.”