The authors of the study, appearing in the Dec. 13 issue of Cell Host & Microbe, are Dr. Christopher N. LaRock of the University of Washington Department of Microbiology and Dr. Brad Cookson, UW professor of microbiology and laboratory medicine.

Normally, certain defender cells are programmed to burst if they are either invaded by or detect the presence of pathogens, Cookson explained. This host defense mechanism called pyroptosis (“going up in flames”) eliminates places for the germs to reproduce. As it splits open, the cell spills a cauldron of antimicrobial chemicals and emits signals to alert of an attack and its precise location. Tissues become inflamed as more cells arrive to fight the infection.

The bacteria are widely believed to be behind the great pestilences of the Middle Ages in the 1300s. The pathogen had evolved a tactic to delay provoking people’s protective inflammatory response until it was too late. Plague claimed an estimated 30 percent to 50 percent of Europe’s 14th century population.

“People and pathogens have been in an eternal struggle since the dawn of humanity,” Cookson said. With a hand over hand gesture he explained, “Humans continuously ratchet up their defenses, and germs repeatedly find a way around them.” 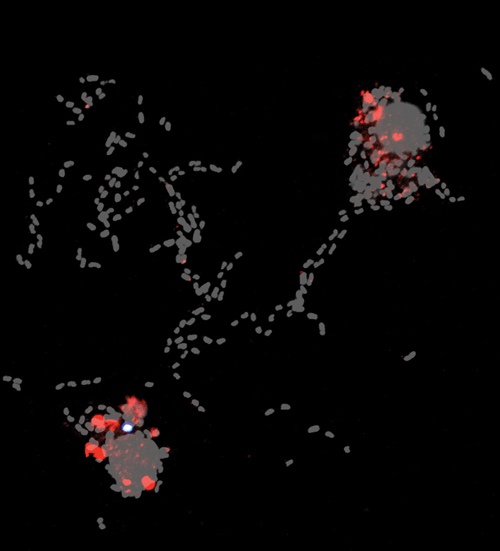 Yersinia (gray) infects two macrophages. In the upper right pyroptosis was subverted via YopM, in the bottom left, pyroptosis is induced and an inflammasome is formed (white). Image credit: Brad Cookson Lab

During several medieval epidemics, the plague started in rats. High-jumping fleas transmitted it to and between humans. It commonly caused lymph nodes to rupture. Respiratory forms were more deadly. They damaged the lungs and were spread by sneezing. Plague bacteria in the blood stream ended lives through sepsis, in which the burden of infection overwhelms the body.

Today, the plague-causing bacteria are still circulating in the world. It is held at bay by sanitation measures and drug treatment.

Plague is now rare, with fewer than 15 infections annually in the United States. The number of cases outside the U.S. is significantly larger, but not precisely known. Plague therefore remains of scientific interest for several reasons.

The Yersinia survival strategy against the programmed death that could kill it and its host cell may offer ideas for vaccine development, Cookson said. At present, no vaccine exists against the plague. Yesinia is of concern as a potential biological warfare pathogen because it can be aerosolized and unsuspectingly breathed into the lungs. Vaccines are being sought to offer widespread public safety, as are methods for enhancing people’s overall infection-fighting capacity.

Yersinia’s techniques for modulating an inflammatory response also offer scientists an overarching perspective on a fundamental aspect of a variety of important diseases.

“On the other hand, excessive or improperly regulated inflammatory responses are responsible for a large number of chronic conditions,” Cookson said. These include vascular flare-ups leading to stroke or heart attack, and autoimmune diseases, among them lupus, juvenile diabetes, ulcerative colitis and myasthenia gravis. Severe injury also can promote life-threatening lung inflammation.

Additionally, plague isn’t the only pathogen to enhance its virulence by sidestepping the inflammatory cell death program. Several other dangerous germs do the same, but in different ways. 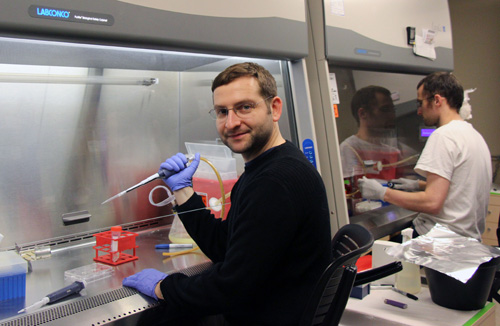 Usually immune system clean-up cells that have been breached by an infection assemble a molecular platform called an inflammasome. This assembly, the researchers explained, activates a powerful, protein-cleaving enzyme called caspase-1. The enzyme is made ready to go in the presence of noxious stimuli, including germs, inorganic irritants, and pore-forming toxins.

To survive, Yersinia pestis must disarm caspase-1. Until the present study, bacterial molecules that directly modulate the inflammasome had not yet been reported. LaRock and Cookson were able to identify a leucine-rich protein secreted by Yersinia pestis that binds and disables its arch-enemy, the caspase-1 enzyme. The potent substance, called Yop M, preempts the activity of caspase-1 and sequesters the enzyme to arrest the development of the inflammasome. As a consequence, the cell fails to sacrifice itself to get rid of the Yersinia and to warn other disease-fighting cells of the infection.

According to the researchers, the Yop M-mediated inhibition of caspase-1 is required for Yersinia to subvert immune signaling, delay inflammation and provoke severe illness. Its dual mechanism for blocking inflammatory cell death, by blocking enzymatic activity and inflammasome maturation, is distinctive.

While caspase-1 is helpful in combatting a number of other microbial infections, several researchers have reported it to be harmful when its activation is aberrant or poorly controlled. Faulty caspase-1 regulation is implicated in several inflammatory disorders. Learning how pathogens manage caspase-1 to their advantage may suggest treatments to limiting its excess activity.

The research was funding by National Institutes of Health research grants HG02360 and AI057141 and National Institute of Health training grant AI055396. The study also received assistance from the Northwest Regional Center of Excellence for Biodefense and Emerging Infectious Diseases, which seeks countermeasures against pathogens of national importance.