COLUMBUS, Ohio – A new study suggests that political bias can influence how people perceive the facial characteristics of a presidential candidate – even after seeing his face on TV thousands of times.

The study of Ohioans immediately before and after the 2012 presidential election showed that people’s mental representation of Republican candidate Mitt Romney’s face differed based on their political persuasion.

Though attitudes are known to influence how people perceive events and objects when information gaps cause ambiguity, this finding was surprising because the research participants had potentially been exposed to 40,000 election commercials between April 2012 and the vote. 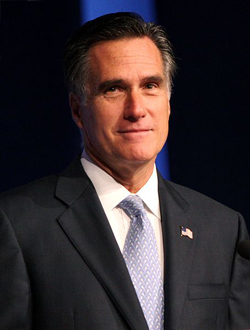 “That our attitudes could bias something that we’re exposed to so frequently is an amazing biasing effect,” said Russell Fazio, professor of psychology at The Ohio State University and senior author of the study. “It suggests that people may not just interpret political information about a candidate to fit their opinion, but that they may construct a political world in which they literally see candidates differently.”

The scientists asked research participants to compare multiple pairs of subtly different images of Romney’s face and select which looked the most like him. After this task, researchers measured participants’ political preferences.

Researchers produced composite images of Romney’s face by averaging the images that had been generated by right-leaning or left-leaning participants. When a separate group of people was asked to judge in which of the images of Romney looked more trustworthy, the observers selected the Republican-generated images.

The findings speak to the power of human attitudes to affect not just what we believe or need, but on what we actually see, Fazio said.

The paper is scheduled for future publication in the journal Psychological Science.

Fazio has specialized in the study of attitudes for more than 30 years, and he was initially skeptical that bias could influence mental representations of a face as familiar as Romney’s during the height of the 2012 presidential election.

“We know that associations between an object and an evaluation can be so strong for a given individual that, once you see that object, the associated evaluation gets activated from memory,” he said. “In this case, the biasing effect influences your visual representation, and what that does is provide further reinforcement of the attitude.”

Beginning with a single photograph of Romney, the researchers used a method called reverse correlation image classification to make subtle changes to the picture by superimposing a random noise pattern over the base face. When presented to the participants, the randomly patterned image appeared on one side of the screen, and its inverse image appeared on the other.

The 148 undergraduate participants were presented with the same noise patterns and completed 450 comparisons of the two images, pressing a key to indicate which photo looked more like Romney to them. In previous research, this method has been shown to provide an estimate of a person’s mental representation of a target object – in this case, Romney’s face.

This method “allowed us to peer into the mind’s eye of the participants and see what Romney looks like to them,” said Alison Young, a graduate student in psychology at Ohio State and lead author of the paper.

After the classification task, participants completed questionnaires about their support for Romney, voting intentions or behavior (based on the timing of the experiment before or after the election) and political orientation.

The researchers generated 12 composite images and grouped them according to their source. One group of images represented average noise patterns created by those who supported Romney, voted for or intended to vote for Romney, and identified as Republicans. The other group of images was a series of composites created by those who opposed Romney, did not vote for him or intend to vote for him and identified as Democrats.

In the second phase of the study, 213 adults contacted through a website and varying widely in age and background were asked to rate the averaged photos generated by the stage-one participants.

These participants had no idea how the images had been generated. They viewed the images in pairs and were asked to indicate in which of the two photographs Romney looked more trustworthy, competent and caring. They were also asked to judge in which images Romney looked better overall.

“Because participants in the first part of the study were told to select the face on each trial that looked more like Romney, they had a goal to be accurate and not let their biases influence their decisions. It is striking that despite this accuracy goal, participants’ political attitudes were associated with how trustworthy other people rated the images generated from their responses,” said co-author Kyle Ratner, a postdoctoral researcher in psychology at Ohio State.

Added Fazio, “The judges are serving as the objective standard. Their selection of trustworthiness is not based on whether the judges like Romney or not. It’s whether the person who generated the face did.”

The biasing effects of attitudes are critical, Fazio noted, because they influence how people process information and judge people or objects, ultimately determining how people behave.

Though the research was not about politics, the researchers did deliberately focus on a political subject because people who follow elections tend to develop strong opinions.

“We used a face that everyone knows really well, so bias should be hard to find,” Young said. “But in political domains, people have strong attitudes, so if we were going to find a bias, this was a good place to look for it.”