Millions Reaching for Most Ambitious Halo Game Yet

Many fans attended launch parties held around the world on Monday, including in London, New York City’s Times Square, and Seattle. Others lined up outside their local video game retailer to buy the newest installment of Halo at midnight. Still others stocked up on Halo-themed Mountain Dew and Doritos, preparing to hunker down and devote some serious hours to the new game.

“The game is epic, and compelling, and I think people are really going to enjoy the characters,” says Frank O’Connor, Halo’s franchise development director.“The game is true to its core, but it’s going to feel like a whole new world as well, and it’s exactly the kind of experience you want in an epic, sci-fi video game – or movie, for that matter.”

O’Connor works for 343 Industries, the division of Microsoft Game Studios established to oversee and develop the Halo franchise after Microsoft and the game’s creator, Bungie, parted ways in 2007. Bungie developed Halo titles exclusively for Xbox, and the two companies have a long-term publishing agreement for future Halo titles.

Though the story and the feel of the game will be familiar, players will enjoy all-new customization tools, enhanced multiplayer possibilities, and a completely overhauled game engine, which makes everything from graphics to audio more powerful than ever, O’Connor says.

“Halo: Reach” is the fourth installment of the Halo franchise, but is a prequel to the first “Halo.” The newest game takes players to Reach, a sister planet to Earth, in the year 2552 just before a frightening surprise attack by a group of ruthless, terrifying alien invaders called the Covenant. 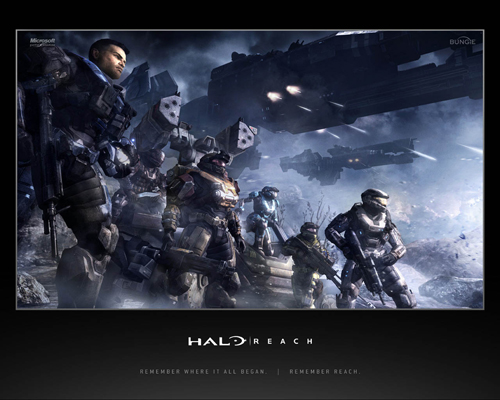 About the image: Noble Team, the star characters of “Halo: Reach,” are a team of Spartan soldiers who sacrifice everything in the epic battle to save the planet Reach – and all of humankind. Image credit: Microsoft

Amid Reach’s ominous march toward planetary doom, a squad of heroes is born. The Spartan soldiers, Noble Team, are humanity’s last line of defense and must demonstrate bravery and sacrifice as they fight against overwhelming odds.

Because “Halo: Reach” takes players to a point in time before the first installment of Halo, fans already know that things don’t end well for planet Reach. But knowing the ending in no way spoils the experience of “living through it,” O’Connor says.

“If you went to see ‘Saving Private Ryan,’ you probably already had a pretty good idea about how World War II ended up, but it didn’t ruin the story,” he says. “In some ways, that’s what ‘Halo: Reach’ is about. It’s about people and their stories, and camaraderie, and the adventures along the way.”

The Halo franchise has sold more than 34 million games since the first installment was released in 2001, and players have logged more than 3.3 million hours of Xbox LIVE online play of the game. Halo continues to be a pop cultural zeitgeist, with success that has catapulted its popularity beyond the typical video game franchise to something more like a Hollywood blockbuster movie, says Mike Stout, Microsoft’s senior product manager for Halo.

It’s hard not to draw parallels between Halo’s popularity and other fan-fueled pop culture phenomenons like the Star Wars franchise. Like Star Wars, Halo has a dedicated following of fans and has also generated all manner of spinoffs and merchandise, including novels, comic books, apparel, action figures and clothing. The game also has inspired fans to have Halo-themed weddings, and even to get Halo tattoos.

“Star Wars has been around for a long time, but it is one of the closest comparisons,” Stout says. “You have mainstream success, a deep and rich story to pull from, and a passionate, excited fan base that loves to understand the story in-depth.”

In 2007, Halo 3 shattered records as the biggest-ever entertainment launch, and “Halo: Reach” is on track to also be one of the largest game releases in history. More than 2.7 million people played the public multiplayer beta of “Halo: Reach.”

“All of that energy, discussion and analysis has built into massive anticipation for this game to go on sale,” says Taylor Smith, Microsoft’s director of global marketing and communications for Xbox.

Though Smith couldn’t specify how many copies of the game had been pre-ordered, “it’s definitely the biggest thing we as Xbox have done,” he says.

Smith notes that while “Halo: Reach” is perhaps the darkest game yet, it was important for players to be able to experience that period in the game’s history. And though it’s the fourth Halo game, it may be just the beginning in terms of fans getting to experience aspects of the Halo story universe.

“Halo is a long-term franchise,” Smith says. “We’re trying to connect the dots and the experiences people have with the brand, whether that’s games, comics, short films or other types of entertainment. I can’t go into a lot of details, but let’s just say it’s a bright future.”

It’s a future, Smith says, that’s kept under CIA-levels of secrecy in a collection of loose leaf binders referred to as “the Halo Bible.”

In the Halo Bible is the story arch – both what’s been revealed and the story still to come – an “awesomely well-thought-out piece of lore and literature,” Smith says.

In addition to the story are the many supporting details that it takes to create such an expansive, imaginary universe, including character information, what the sky on planet Reach should look like from a certain location, what a ship sounds like taking off, and what something should look like when it explodes.

Smith says Halo’s fans are so passionate and detail-oriented that the game’s creators have to be organized and thoughtful about every aspect of the experience “so it’s bulletproof from all angles.”

The advertising and marketing has gotten more sophisticated as well, with tie-ins from key partners such as Mountain Dew and Doritos as well as retail partners and launch parties around the world. And for the first time, there also was a countdown clock on Xbox LIVE telling those who were waiting exactly how long they had to wait for the game to be released.

To promote the new game, Xbox released live-action Web movies leading up to the launch that depicted the lives of everyday citizens on the planet Reach before the invasion, once again stirring up murmurs about a possible Halo movie.

As for the long-rumored (and longtime fan requested) Halo movie deal, the game’s creators have nothing to report.

“I’d be the No. 1 fan of having a Halo movie,” Smith says. “Obviously there’s huge potential to bring the Halo universe to life in a live-action, storytelling way.”

Stout says that after almost 10 years of Halo history and learning, he’s excited to hear what people think of the most ambitious Halo game yet. He jokes that there may be a strong correlation between Halo fans and workers taking vacation and sick days this week.

Halo players have got to come up for air at some point, right?

“You would think so, but I don’t know,” Stout says, laughing. “It’s a good time. They should stock up and make sure they have plenty of food, and I’m sure they’ll be fine.”

1 comment on “Millions Reaching for Most Ambitious Halo Game Yet”