*An encounter with 35 young girls in Kenya prompted Margo Day to start a secondary school there. The school will also be a refuge for girls who fled their homes to avoid the traditional practice of female genital mutilation.*

REDMOND, Wash. — When Margo Day went on a safari last year in Africa, she more or less knew what to expect. She had traveled in Kenya and Tanzania 16 years earlier, where she had what she calls a life-changing experience watching lions, elephants and wildebeests roam the plains. She returned to Kenya last fall to share that experience with her 19-year-old niece, Gail.

What Day didn’t expect was meeting 35 young girls who would change her life. But Day, who serves as West regional vice president of U.S. Small and Midmarket Solutions and Partners at Microsoft, had also wanted to do some philanthropic work on her trip. So she and her niece spent the last four days of their tripin remote northern Kenya with a team from World Vision, an international nonprofit that helps children, families and communities overcome poverty and injustice. The day before Day and her niece flew back to the U.S., they visited a primary school that also housed a rescue center run by World Vision.

There they met the girls. All had fled their homes to avoid the traditional practice of female genital mutilation. Day heard stories of arranged marriages to much older men, of beatings, of walking days through the wilderness to reach the center. The girls, all between the ages of nine and 13, were living at the rescue center while they attended school. Fourteen of them, though, had a crisis looming. They were about to graduate eighth grade, which meant the end of state-provided education. They couldn’t afford secondary school, but they couldn’t return to their homes. They were effectively orphaned.

Surrounded by these young girls, who mixed their sad stories with questions about life in the United States, Day made a decision. 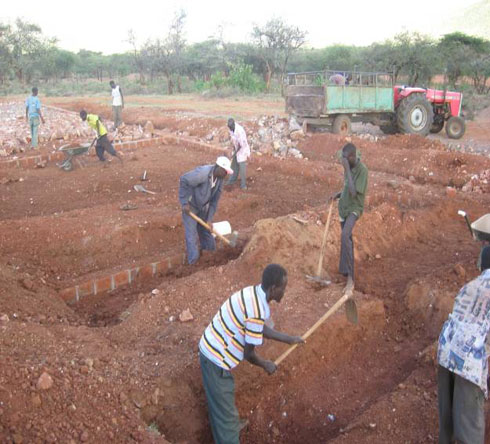 Workers begin groundwork for the St. Elizabeth School, which will soon open its doors to 160 girls in the Pokot region of Kenya, approximately 300 miles northwest of Nairobi. Image credit: Microsoft

“I thought, ‘here are these kids who have shown such determination to get here and now they have no hope for a better life,’” she said. “I can’t walk away from this.”

She didn’t, and as a result the St. Elizabeth School will soon open its doors to 160 girls in the Pokot region of Kenya, approximately 300 miles northwest of Nairobi, the capital. When the secondary school opens in May, it will have science and computer labs, four classrooms and dormitory facilities for 115 girls, including the 35 she met in the rescue center.

With help from several other Microsoft employees, Day has led fundraising efforts that have brought in roughly $300,000 of the $366,000 needed to cover the project costs. She said the experience has been unbelievable.

“This is all about giving back,” Day said. “When I looked into eyes of a 13-year-old girl who wanted to make a better life for herself, I thought, ‘I’m not worthy to be standing on the same ground.’ Then to be presented with an opportunity through the career I’ve chosen to give back and help a little is the most humbling thing I’ve ever done.”

It was also a life-changing moment for her niece, who had never traveled outside the U.S. Day said that Gail had been bullied when she was in junior high. “To go to Africa, and to see these girls who were essentially bullied by their own society, she was deeply touched on an emotional level,” Day said. “She came back and did some fundraising with her friends, and now she realizes there’s a larger position in life to make a difference in the lives of other people.” 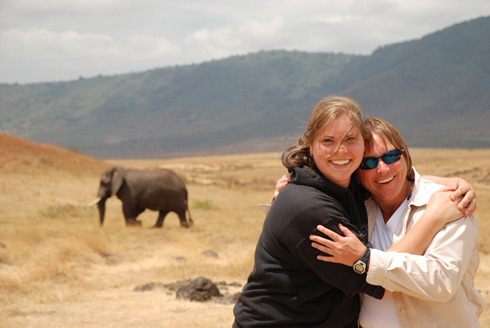 Day started her own efforts as soon as she returned to Redmond, and a group of 13 Microsoft employees, along with several others, quickly became involved. Once the St. Elizabeth School opens and the group completes its fundraising, they plan to do it all over again. “We want to be active in finding and funding projects that provide children with safe environment and education so they can have a better life,” Day said. The group of employees plans to go to Africa in May to attend the grand opening of the school and visit perspective areas for other projects.

The Africans at Microsoft (AMSFT) group has also become involved with the school. The focus for AMSFT this year is education, said Wambui Kihanya, who as president of AMSFT passionately embraced the project.  During the company’ employee Giving Campaign, Kihanya and others organized a luncheon where members of AMSFT could learn more about the project, and held a silent auction featuring original art paintings of people in the Pokot tribe, painted by Claire Mungai, a Microsoft employee in Kenya. All of the art proceeds were donated to the school project.

Day said the promise of education is already having an impact on the young girls she met in Kenya. One wrote to World Vision about how the school is transforming her life:

“Now with World Vision providing us with a secondary school, I don’t have anything to say – just to thank God for opening ways for me,” the girl said. “I can now see my dream of being a nurse becoming a reality. My part now is to work hard and pass the exams; everything else is taken care of. I can’t express the happiness that I have.”