ANN ARBOR, Mich.—There’s a whale of a new display at the University of Michigan Exhibit Museum of Natural History, a leviathan that represents a scientific saga of equally grand proportions.

A complete, 50-foot-long skeleton of the extinct whale Basilosaurus isis, which lived 37 million years ago, now is suspended from the ceiling of the museum’s second floor gallery and will reign over an updated whale evolution exhibit scheduled to open in April 2011.

“It’s a spectacular fossil,” said Exhibit Museum director Amy Harris. “Basilosaurus looks ferocious with its big teeth, and we hope people will spend a lot of time looking at it, studying it and reading about it. The Exhibit Museum tells the story of life on Earth, and when museum visitors see Basilosaurus, they’ll be able to see evidence for whale evolution, which is one of the more interesting stories in evolution.”

Basilosaurus and its companions also represent decades of paleontological detective work by a team led by Philip Gingerich, director of the U-M Museum of Paleontology and the Ermine Cowles Case Collegiate Professor of Paleontology. Since the 1980s, Gingerich and colleagues have located and mapped the remains of more than a thousand whales in an area of the Egyptian desert known as Wadi Hitan (“valley of the whales”), a UNESCO World Heritage site. Their work there was the subject of an article in the August 2010 issue of National Geographic. In addition, Gingerich and colleagues have made significant fossil whale discoveries in Pakistan.

The finds have helped piece together the story of how whales evolved from typical land-dwelling mammals to creatures that spend their whole lives in the sea—a story that will be showcased in the new exhibit, “Back to the Sea: The Evolution of Whales.” 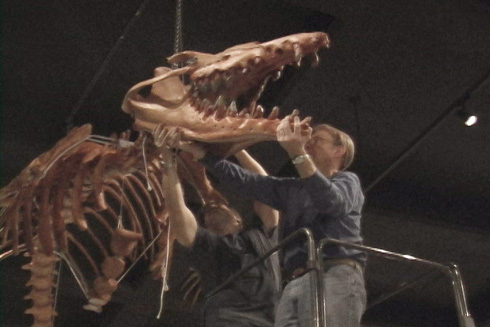 “We created an exhibit on this topic in 1997 with Professor Gingerich, and since then he’s made new discoveries that we’re excited to be able to include in the new exhibit,” Harris said. To help defray the costs of creating the Basilosaurus skeleton for display and completing the update of the “Back to the Sea” exhibit, the Exhibit Museum has a Buy A Bone campaign underway, through which donors can sponsor individual bones in the skeleton.

“Donors receive a certificate and will get an invitation to the donor preview party in the spring when the full exhibit is completed,” Harris said. “Now it’s the holiday season, and we’re encouraging people to give a bone for the holidays—it’s an exciting and unusual gift idea. There’s no limit of sponsors per bone.”

The Basilosaurus skeleton was discovered in 1987, when a member of Gingerich’s team found a bit of the whale’s shoulder blade protruding from the sand. As he swept the sand away, he revealed the whale’s lower jaws, but the field season was almost over, so the team simply noted the fossil’s location and covered it back up. Two years later, they returned to excavate the skull and lower jaws, casts of which have been on display at U-M since 1997. 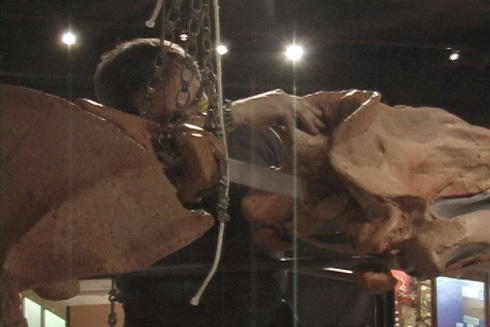 This skeleton of the extinct whale /Basilosaurus isis, /which lived 37 million years ago, is suspended from the ceiling of the second floor gallery of the University of Michigan Exhibit Museum of Natural History. It will be the centerpiece of an updated whale evolution exhibit scheduled to open in April 2011. Image Credit: Mandira Banerjee

On that same return trip, Gingerich made an astonishing discovery when he stopped to pick up what he thought was a piece of Basilosaurus rib. The “rib” turned out to be a small femur (thigh bone) of a mammal with a well formed knee joint. Suspecting that the diminutive leg belonged to Basilosaurus, Gingerich returned to a skeleton that was well exposed in the desert sand and, surprisingly quickly, recognized another small leg, this one in its rightful place far down the lengthy vertebral column.

Armed with the knowledge that at least some of these huge whales had legs and knees and knowing where on the skeleton to look for them, Gingerich’s team re-examined and excavated other Basilosaurus skeletons whose locations they had mapped, and ended up finding a complete pelvis, leg bones, ankles and even toe bones. The giant whale’s legs and feet were small and useless for walking, but they represented an important link to its terrestrial ancestors.

Gingerich kept busy with other fossil whales through the 1990s, working mainly in Pakistan, where his team found complete skeletons of early whales that could walk on land. Then, in 2005, the team returned to Wadi Hitan to see if they could find the rest of the Basilosaurus skeleton they’d partially excavated in 1987. After more than two weeks of painstaking work, they had exposed the remaining bones, which they encased in plaster jackets for shipping.

Two and a half years passed, as Gingerich negotiated for permission to ship the bones back to Michigan. When the bones finally arrived, it took another year or more of work to expose, clean and stabilize the fossils.

“We’re talking about four tons of sediment, with the whale encased in the sediment,” said William Sanders, an assistant research scientist who supervises the vertebrate fossil preparation laboratory. “We had to get these immense crates into the museum, break open the heavy plaster jackets, and then start separating the sediment away from the fossils. Four tons is a considerable amount to remove.” For that task, Sanders enlisted a “small army” of work study and Undergraduate Research Opportunity Program students.

Next came the “elaborate and exhausting” work of making replicas of the complete skeleton for study, display and exchange with other institutions – a process that took even longer than cleaning the bones, Sanders said. Again, students were involved in the molding and casting.

The replicas made for study are considerably lighter in weight than the original skeleton – a single fossilized Basilosaurus vertebra weighs 35 pounds, while the fiberglass version weighs only two pounds – but because the display skeleton was to be hung from the ceiling, the Exhibit Museum wanted it even lighter. So Exhibit Museum preparators Mike Cherney and Dan Erickson came up with a way of making foam-filled fiberglass replicas of the bones, and they worked with Gingerich to figure out exactly how to arrange the skeleton in a life-like pose – a process that was as educational for Gingerich as for the preparators.

“Just the act of mounting the skeleton makes you think about how the bones really fit together and confront uncertainties that you would never realize you didn’t understand until you try to put them together,” said Gingerich, who holds appointments in the departments of Geological Sciences, Ecology & Evolutionary Biology and Anthropology. “So mounting it here has been a very satisfying and informative experience in terms of my research. I’m also thrilled to have this exhibit in the museum because it symbolizes the cooperation that goes into an international project, as well as the internationalism of the university.”