Mercury in the Global Ocean

Although the days of odd behavior among hat makers are a thing of the past, the dangers mercury poses to humans and the environment persist today.

Mercury is a naturally occurring element as well as a by-product of such distinctly human enterprises as burning coal and making cement. Estimates of “bioavailable” mercury—forms of the element that can be taken up by animals and humans—play an important role in everything from drafting an international treaty designed to protect humans and the environment from mercury emissions, to establishing public policies behind warnings about seafood consumption.

Yet surprisingly little is known about how much mercury in the environment is the result of human activity, or even how much bioavailable mercury exists in the global ocean. Until now. 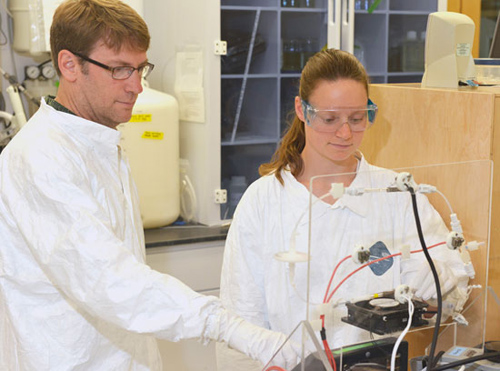 Dr. Carl Lamborg (left), lead author on a recent paper in Nature estimating the amount of natural and pollution-derived mercury in the global ocean with his lab manager, Gretchen Swarr, who is also a co-author on the article. (Photo by Ken Kostel, Woods Hole Oceanographic Institution)

A new paper by a group that includes researchers from the Woods Hole Oceanographic Institution (WHOI), Wright State University, Observatoire Midi-Pyréneés in France, and the Royal Netherlands Institute for Sea Research appears in this week’s edition of the journal Nature and provides the first direct calculation of mercury in the global ocean from pollution based on data obtained from 12 sampling cruises over the past 8 years. The work, which was funded by the U.S. National Science Foundation and the European Research Council and led by WHOI marine chemist Carl Lamborg, also provides a look at the global distribution of mercury in the marine environment.

“It would seem that, if we want to regulate the mercury emissions into the environment and in the food we eat, then we should first know how much is there and how much human activity is adding every year,” said Lamborg, who has been studying mercury for 24 years. “At the moment, however, there is no way to look at a water sample and tell the difference between mercury that came from pollution and mercury that came from natural sources. Now we have a way to at least separate the bulk contributions of natural and human sources over time.” 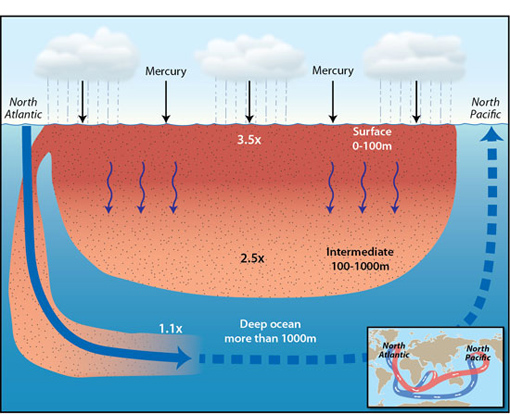 Researchers led by Carl Lamborg at the Woods Hole Oceanographic Institution found that mercury from human activity (primarily atmospheric emissions produced by coal burning and cement production, as well as gold mining) have resulted in ocean waters down to 100 meters depth being enriched in the toxic element up to 3.5 times the background level caused by the natural breakdown, or weathering, of rocks on land. (Illustration by Jack Cook, Woods Hole Oceanographic Institution)

The group started by looking at data sets that offer detail about oceanic levels of phosphate, a substance that is both better studied than mercury and that behaves in much the same way in the ocean. Phosphate is a nutrient that, like mercury, is taken up into the marine food web by binding with organic material. By determining the ratio of phosphate to mercury in water deeper than 1,000 meters (3,300 feet) that has not been in contact with Earth’s atmosphere since the Industrial Revolution, the group was able to estimate mercury in the ocean that originated from natural sources such as the breakdown, or “weathering,” of rocks on land.

Their findings agreed with what they would expect to see given the known pattern of global ocean circulation. North Atlantic waters, for example, showed the most obvious signs of mercury from pollution because that is where surface waters sink under the influence of temperature and salinity changes to form deep and intermediate water flows. The Tropical and Northeast Pacific, on the other hand, were seen to be relatively unaffected because it takes centuries for deep ocean water to circulate to those regions.

But determining the contribution of mercury from human activity required another step. To obtain estimates for shallower waters and to provide basin-wide numbers for the amount of mercury in the global ocean, the team needed a tracer—a substance that could be linked back to the major activities that release mercury into the environment in the first place. They found it in one of the most well studied gases of the past 40 years—carbon dioxide. Databases of CO2 in ocean waters are extensive and readily available for every ocean basin at virtually all depths. Because much of the mercury and CO2 from human sources derive from the same activities, the team was able to derive an index relating the two and use it to calculate the amount and distribution of mercury in the world’s ocean basins that originated from human activity. 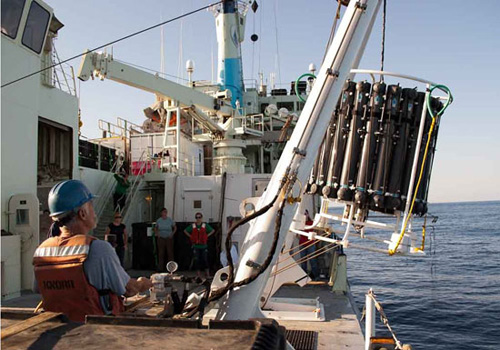 A CTD (conductivity, temperature, depth) rosette is lowered over the side of R/V Knorr during the North Atlantic GEOTRACES cruise in 2011. Data and water samples collected during the cruise contributed to the study of mercury in the global ocean led by Carl Lamborg. (Photo by Brett Longworth, Woods Hole Oceanographic Institution)

Analysis of their results showed rough agreement with the models used previously—that the ocean contains about 60,000 to 80,000 tons of pollution mercury. In addition, they found that ocean waters shallower than about 100 m (300 feet) have tripled in mercury concentration since the Industrial Revolution and that the ocean as a whole has shown an increase of roughly 10 percent over pre-industrial mercury levels.

“With the increases we’ve seen in the recent past, the next 50 years could very well add the same amount we’ve seen in the past 150,” said Lamborg. “The trouble is, we don’t know what it all means for fish and marine mammals. It likely means some fish also contain at least three times more mercury than 150 years ago, but it could be more. The key is now we have some solid numbers on which to base continued work.”

“Mercury is a priority environmental poison detectable wherever we look for it, including the global ocean abyss,” says Don Rice, director of the National Science Foundation (NSF)’s Chemical Oceanography Program, which funded the research. “These scientists have reminded us that the problem is far from abatement, especially in regions of the world ocean where the human fingerprint is most distinct.” 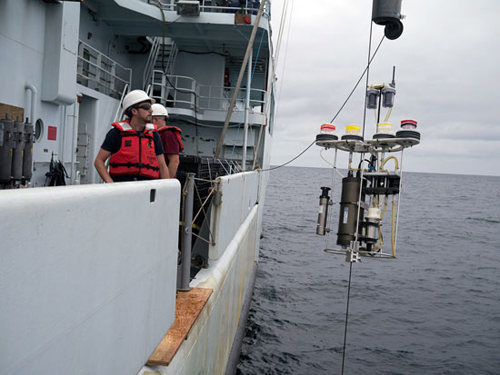 A McLane pump being deployed from R/V Thompson during the West Pacific GEOTRACES cruise in 2013 helped researchers gather small particles of organic matter to which mercury attaches and sinks to intermediate depths (100 to 1,000 meters) in the ocean. (Photo by Brett Longworth, Woods Hole Oceanographic Institution)