So long, solitons: University of Chicago physicists have shown that a group of scientists were incorrect when they concluded that a mysterious effect found in superfluids indicated the presence of solitons—exotic, solitary waves. Instead, they explain, the result was due to more pedestrian, whirlpool-like structures in the fluid. They published their explanation in the Sept. 19 issue of Physical Review Letters.

The debate began in July 2013, when a group of scientists from the Massachusetts Institute of Technology published results in Nature showing a long-lived structure in a superfluid—a liquid cooled until it flows without friction. The researchers created the structure in a superfluid made of ultra-cold lithium atoms, by hitting half of the fluid with a laser, so that the lithium particles would be in different quantum-mechanical configurations in the two halves.

When they imaged the result, the researchers observed a dark line cutting across the cigar-shaped volume of superfluid, indicating a region where the density of particles in the fluid was lower. This, they concluded, was a soliton, which behaves like a sparsely populated wall between two halves of the fluid, separating the particles found in the two different states. This wall persisted for a long time, and oscillated back and forth across the fluid.

The appearance of the soliton wall was a surprising conclusion, because it didn’t fit in with the accepted theories about the behavior of such systems.

“If it were a wall, that would mean that there’s some very unusual physics that theorists did not know about going on, so it of course attracted a huge amount of attention,” said Peter Scherpelz, a postdoctoral scientist in physics and lead author of the paper. 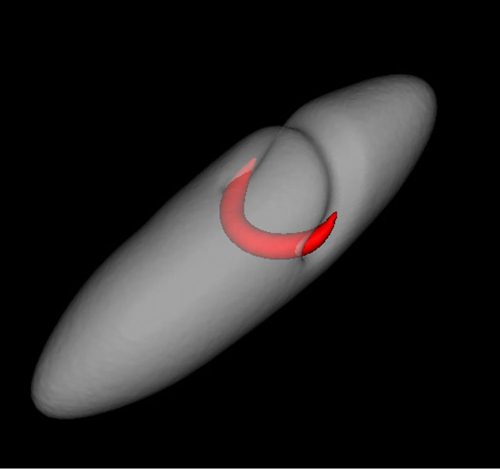 Researchers produced this image in a computer simulation of an unexpected phenomenon found in an experiment involving ultracold superfluids. This image shows a three-dimensional view of a vortex line (red) as it forms from a decaying vortex ring in a superfluid. Photo by Peter Scherpelz

A scientific saga ensued, in which multiple groups from different institutions attempted to understand the result. But the UChicago group—led by Kathryn Levin, professor in physics—was the first to present the correct explanation.

Levin’s group tried to reproduce the puzzling result with a computer simulation of a superfluid. The group had developed the simulation thanks to collaboration with Argonne National Laboratory. Meanwhile, other groups tried their hands at simulations as well. Some concluded that the region of lower density in the fluid was the result not of a soliton but of a vortex ring—a swirling, donut-shaped structure, around which particles circulate. A smoke ring is a well-known example of a vortex ring.

But Levin’s group couldn’t reproduce these results in their simulation. Instead, they found that a vortex ring was briefly established, but quickly decayed to a simple vortex line, akin to a tornado or whirlpool stretching across the fluid.

Shortly after Levin’s group posted their results on the preprint server arXiv, the MIT researchers released their new results in a preprint, explaining that what they had seen were simple vortices—validating the UChicago theory.

“We swam upstream in a way,” said Levin. “Not too often theory anticipates experiment, and not too often theory’s bold enough to say ‘Wait a minute. We don’t agree with what the going story is. We think it had to be something else.’”

Viewed from the side, a computer simulation clearly shows the winding path that a vortex takes through a superfluid over time. Such a view was inaccessible in the original experiment that scientists sought to simulate. Photo by Peter Scherpelz

The problems with the earlier simulations came down to symmetry. Much like a cigar looks the same if you rotate it around its long axis, other teams had assumed in their simulations that the behavior in the fluid was symmetric—an approximation that made it easier for structures like rings to persist, but which didn’t account for imperfections that are inevitable in real-world experiments.

The original MIT experiment had also assumed an incorrect symmetry to come to their original conclusion. They measured only a two-dimensional projection of their experiment, meaning that they couldn’t distinguish between the three possible structures, because a ring or a wall viewed from the side looks just like a line. The MIT group had incorrectly assumed that the feature was symmetric, and that it sliced all the way through the cigar to form a soliton wall.

Physicists are intrigued by the physics of superfluids in part because they are related to superconductors, which have a multitude of technological applications due to their ability to conduct electricity without any resistance. Superfluids, however, often are an easier system to study. The materials are so similar that the simulation code used by the group was originally developed for superconductors, and modified for superfluids.

Another reason physicists want to understand this system is to study physics out of equilibrium, in which the material hasn’t reached a balanced, comfortable state. After the superfluid is hit with the laser, half of the atoms are in a different state than the other half, and they want to return to the same state. Vortices form as the superfluid moves toward equilibrium.

“Everything we know about physics is sort of confined to equilibrium and we’re trying really hard to test ourselves and learn what goes on out of equilibrium, because that’s a lot of the real world,” Levin said.