The Minnesota River’s usually placid surface belies its status as a river —and a watershed—in need of help.

The river is naturally prone to heavy sediment loads. It runs through rich glacial deposits, in a channel carved by a catastrophic flood at the end of the last ice age, when a large lake formed by glacial meltwater gave way.

In the last century, however, its watershed has undergone dramatic changes as human activity has added to the river’s burden of sediment and nutrients. And lately, climate change has been exerting its effects— notably, shorter, more intense storms that magnify inputs from erosion. 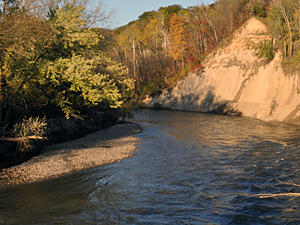 University of Minnesota researchers have been studying the watershed for years, seeking ways to stem the erosion that degrades water quality and robs the region of priceless farmland. In September the University received a five-year, $4.3 million Water Sustainability and Climate (WSC) grant from the National Science Foundation to lead a multiuniversity study to learn how climate, water and human land use interact in the watershed and develop tools to study similar situations nationwide.

The goal is to gather data specific enough to guide efforts to remedy problems and inform policies that support clean water.

“This grant brings together some of the top scientists and engineers from across the country to study one of the most important issues of our time—water sustainability under climate and human stressors,” says civil engineering professor Efi Foufoula-Georgiou, the lead researcher on the grant. “Change is often inevitable, but if we can use the best of science to understand the ‘workings of a system,’ its complexities, feedbacks, and vulnerabilities to change, we are halfway toward sustainability. The other half is working with decision- and policy-makers to implement science-based solutions.”

The Minnesota basin is a prime model for this kind of study because its waters are highly degraded. It also presents a golden opportunity to study how to deal with difficult, universal questions about how to restore the health of a major waterway while preserving prime agricultural capacity. One question under scrutiny is how the effects of an extensive network of drain pipes and tiles that move excess water from agricultural areas to streams interact with the effects of higher precipitation brought on by climate change.

“With climate change, more water is coming in, then tile drains move it out very rapidly,” says WSC researcher Jacques Finlay, an associate professor of ecology, evolution and behavior. This and other factors lead to “more water moving out, and more erosive power. [WSC researcher Patrick] Belmont has shown that these [stream] banks are a major source of sediment in the river.”

Finlay credits Belmont, a former postdoc with the U of M’s National Center for Earth-surface Dynamics, with laying much of the groundwork for the current study.

“In addition, we need to recognize that drainage is essential for maintaining high crop productivity. So we need to come up with a solution that continues to allow these benefits—reduced soil erosion and increased agricultural productivity—but reduces high flows.” Possibilities, he says, include controlled drainage, wetland restoration, and detention basins. 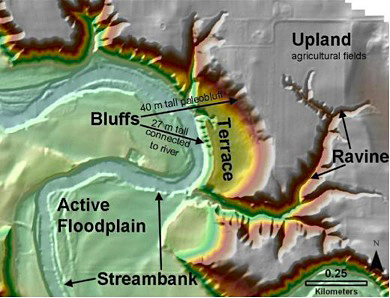 Digital elevation model of a bend in the Le Sueur River, showing four major sediment sources in its watershed: upland fields, ravines, bluffs, and streambanks. Floodplains are sediment sinks. The Le Sueur flows toward the Minnesota River from the south. Image credit: University of Minnesota

The WSC researchers will employ a variety of methods to identify features of the watershed that are most sensitive to change from different sources and the most effective land and water management practices to manage changes. Field work begins this summer and will include, for example, collecting sediment cores from flood plains to see how patterns of sediment deposition have changed over long periods of time.

“Sediment is a major stressor in streams,” says Finlay, whose focus is food webs and ecosystem processes. “We want to address impacts on local streams, which are sensitive to fine sediments. They degrade spawning habitat. [My team and I] want to know what limits the food energy from primary producers like algae and microbes from moving through the web all the way to fish.”

The WSC researchers will look for tipping points (thresholds) in the responses of physical or biological systems to change. Knowing how much change organisms and streams can tolerate will be valuable in applying this research to other riverine systems.

“There are some real costs to things that are happening now, like too much erosion and nutrient leakage, and we need to decide as a society how to deal with them,” says Finlay. “Those costs haven’t been factored into land management decisions as much as they should.”

“Key to any sustainability study are models of how water, sediment and organisms interact,” says Foufoula-Georgiou. “Over the long term, they must predict how changing one part of the system changes another part and anticipate critical thresholds and the fact that interactions may amplify change. Our team aims to develop such a predictive framework for the Minnesota River Basin that is also transferable to other sites.”