More than 190,000 people have been killed in the 10 years since the war in Iraq began. The war will cost the U.S. $2.2 trillion, including substantial costs for veterans care through 2053, far exceeding the initial government estimate of $50 to $60 billion, according to a new report by scholars with the “Costs of War” project at Brown University’s Watson Institute for International Studies. The 10th anniversary of the U.S. invasion of Iraq is March 19, 2013.

PROVIDENCE, R.I. [Brown University] — Ten years after the U.S.-led invasion of Iraq on March 19, 2003, researchers have released the first comprehensive analysis of direct and indirect human and economic costs of the war that followed. According to the report, the war has killed at least 190,000 people, including men and women in uniform, contractors, and civilians and will cost the United States $2.2 trillion — a figure that far exceeds the initial 2002 estimates by the U.S. Office of Management and Budget of $50 to $60 billion.

Among the group’s main findings:

In releasing the report, Lutz said, “The staggering number of deaths in Iraq is hard to fathom, but each of these individuals has to count and be counted.”

“Nearly every government that goes to war underestimates its duration, neglects to tally all the costs, and overestimates the political objectives that will be accomplished by war’s violence,” Crawford said.

The project also assesses claims made as part of the rationale for invading Iraq: increased U.S. security, enhanced democratic governance in Iraq, and improved conditions for Iraqi women. 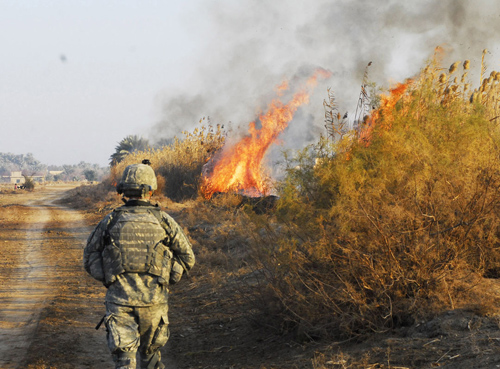 Reckoning the costs of the Iraq War More than 70 percent of deaths from direct war violence have been civilians. That does not include indirect deaths from disease or injury suffered in conditions degraded by war. Image Credit: Kevin Holden for U.S. Army

Costs of War has released its findings online, at www.costsofwar.org, to spur public discussion about the Iraq war.

The Costs of War project involves 30 economists, anthropologists, lawyers, humanitarian personnel, and political scientists from 15 universities, the United Nations, and other organizations. In 2011 the group released figures for a range of human and economic costs associated with the U.S. military response to the 9/11 attacks. It estimated the total combined costs of the wars in Afghanistan, Iraq, and Pakistan at $4 trillion and total direct war casualties at minimum oft 330,000 men, women, and children.

Costs of War is a nonpartisan, nonprofit, scholarly initiative that derives its purpose from President Eisenhower’s 1961 farewell address, in which he warned of the “unwarranted influence” of the military-industrial complex and appealed for an “alert and knowledgeable citizenry” as the only force able to balance the often contrasting demands of security and liberty in a democratic state.

The Watson Institute’s Choices Program, which develops curricula on current and historical international issues, offers two online lessons related to the Iraq War: One on the Costs of War report and one on the Iraq refugee crisis.