ANN ARBOR, Mich.— Melting glaciers and ice caps on Canadian Arctic islands play a much greater role in sea level rise than scientists previously thought, according to a new study led by a University of Michigan researcher.

The 550,000-square-mile Canadian Arctic Archipelago contains some 30,000 islands. Between 2004 and 2009, the region lost the equivalent of three-quarters of the water in Lake Erie, the study found. Warmer-than-usual temperatures in those years caused a rapid increase in the melting of glacier ice and snow, said Alex Gardner, a research fellow in the Department of Atmospheric, Oceanic and Space Sciences who led the project. The study is published online in Nature on April 20.

“This is a region that we previously didn’t think was contributing much to sea level rise,” Gardner said. “Now we realize that outside of Antarctica and Greenland, it was the largest contributor for the years 2007 through 2009. This area is highly sensitive and if temperatures continue to increase, we will see much more melting.”

Ninety-nine percent of all the world’s land ice is trapped in the massive ice sheets of Antarctica and Greenland. Despite their size, they currently only account for about half of the land-ice being lost to oceans. This is partly because they are cold enough that ice only melts at their edges. 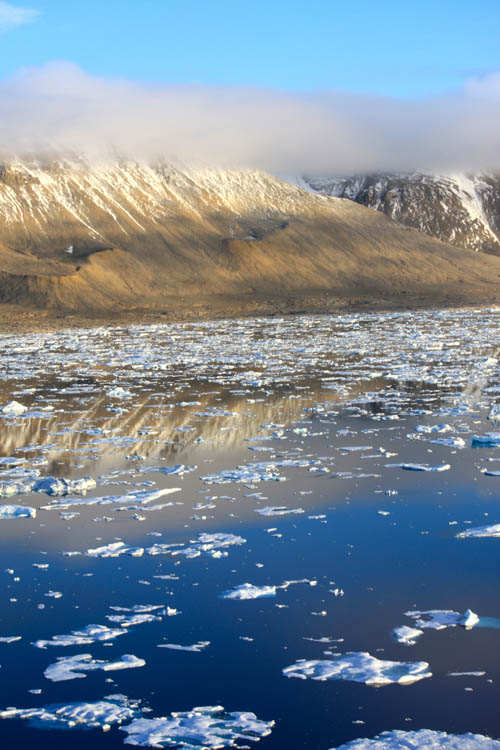 The other half of the ice melt adding to sea-level rise comes from smaller mountain glaciers and ice caps such as those in the Canadian Arctic, Alaska, and Patagonia. This study underscores the importance of these many smaller, often overlooked regions, Gardner said.

During the first three years of this study, from 2004 through 2006, the region lost an average of 7 cubic miles of water per year. That increased dramatically to 22 cubic miles of water—roughly 24 trillion gallons—per year during the latter part of the study. Over the entire six years, this added a total of 1 millimeter to the height of the world’s oceans. While that might not sound like much, Gardner says that small amounts can make big differences.

In this study, a one-degree increase in average air temperature resulted in 15 cubic miles of additional melting.

Because the study took place over just six years, however, the results don’t signify a trend. 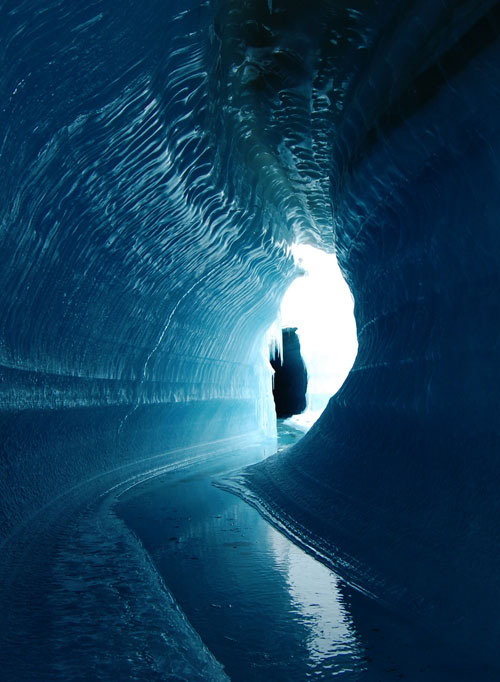 This ice cave, or englacial melt channel, was formed by meltwater flowing within the ice of Belcher Glacier on Devon Island in Nunavut, Canada. It was photographed in August 2009. Image credit: Angus Duncan

“This is a big response to a small change in climate,” Gardner said. “If the warming continues and we start to see similar responses in other glaciated regions, I would say it’s worrisome, but right now we just don’t know if it will continue.”

The United Nations projects that the oceans will rise by a full meter by the end of century. This could have ramifications for tens of millions of people who live in coastal cities and low-lying areas across the globe. Future tsunamis and storm surges, for example, would more easily overtop ocean barriers.

To conduct the study, researchers from an international array of institutions performed numerical simulations and then used two different satellite-based techniques to independently validate their model results. Through laser altimetry, they measured changes in the region’s elevation over time. And through a technique called “gravimetry,” they measured changes in the Earth’s gravitational field, which signified a redistribution of mass—a loss of mass for glaciers and ice caps. 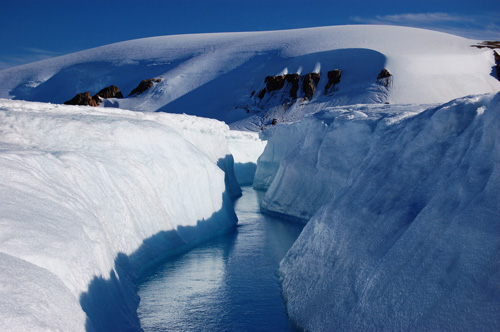 This ice channel, or supraglacial melt channel, was formed by meltwater flowing along the surface of the Belcher Glacier on Devon Island in Nunavut, Canada. It was photographed in August 2009. Image credit: Angus Duncan

The paper is called “Sharply Increased Mass Loss from Glaciers and Ice Caps in the Canadian Arctic Archipelago.” The research was funded by the Natural Sciences and Engineering Research Council of Canada, the Alberta Ingeneuity Fund, the European Union 7th Framework Program, and the Canadian Foundation for Climate and Atmospheric Sciences.

Other collaborators are with the University of Alberta, Scripps Institution of Oceanography, the University of Oslo, the Royal Netherlands Meteorological Institute, the Alaska Department of Natural Resources, the Geological Survey of Canada, Trent University, Westfield State University and the Campbell Scientific Canada Corp.