Walking and thinking at the same time can be especially difficult for persons who’ve suffered concussions, and scientists hope to use that multitasking challenge — measured by a simple radar system — to quickly screen individuals who may have suffered brain injuries.

By asking an individual to walk a short distance while saying the months of the year in reverse order, researchers at the Georgia Tech Research Institute (GTRI) can determine if that person is impaired and possibly suffering from a concussion. This simple test, which could be performed on the sideline of a sporting event or on a battlefield, has the potential to help coaches and commanders decide if athletes and soldiers are ready to engage in activity again.

“When a person with a concussion performs cognitive and motor skill tasks simultaneously, they have a different gait pattern than a healthy individual, and we can identify those anomalies in a person’s walk with radar,” said GTRI research engineer Jennifer Palmer.

More than 1 million concussions and other mild traumatic brain injuries are reported each year in the United States and catching them right after they happen can improve treatment and prevent further injury or other long-term health issues. Diagnosing concussions can be difficult, though, because the symptoms of concussions are not always easily visible or detectable, even though they last for weeks or months following the incident. Methods exist for detecting concussions, but most focus purely on cognitive impairment and do not assess accompanying motor skill deterioration. 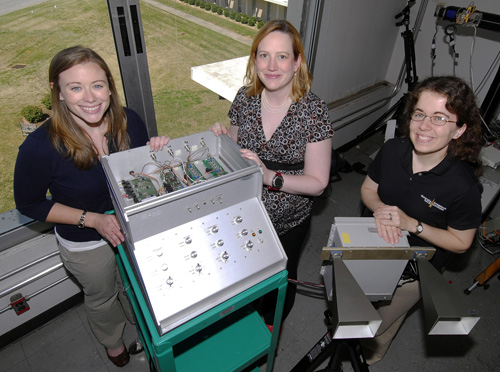 GTRI research engineers Jennifer Palmer, Amy Sharma and Kristin Bing (left-right) are developing a way to use radar to quickly screen individuals to determine if they have suffered a concussion. Image credit: Georgia Tech/Gary Meek

Details of GTRI’s technique, which simultaneously examines a person’s cognitive and motor skills, will be presented on April 26 at the SPIE Defense, Security and Sensing conference in Orlando. GTRI research engineers Kristin Bing and Amy Sharma, principal research scientist (ret) Eugene Greneker, and research scientist Teresa Selee also worked on this project, which is supported by the GTRI Independent Research and Development (IRAD) program.

Several studies have shown that measuring changes in gait could be used to diagnose concussions, but measuring a person’s gait typically requires wearing special clothing with reflective markers or sensors so that movements can be captured with motion analysis cameras. Using radar for gait analysis would be faster and less intrusive than these existing techniques.  The assessment would be done with radar systems similar to those used by police for measuring the speed of vehicles.

For their study, the GTRI research team compared how 10 healthy individuals walked normally and when impaired. For the impairment scenario, individuals wore goggles that simulated alcohol impairment. Past research has shown that concussion impairment is equivalent to having a blood alcohol level of 0.05 percent.

“We’re using a 10.5 gigahertz continuous wave radar, which is similar to a police officer’s radar gun that measures the speed of a car,” explained Bing. “The data we collect tells us the velocity of everything that’s in the field of view of the radar at that time, including a person’s foot kicks, and head and torso movements.”

The researchers analyzed the radar data using information-theoretic techniques, which detected similarities and differences in the information without having to identify and align specific body parts. In addition, these techniques could recognize a gait anomaly without requiring that an individual’s normal gait be measured before the person became impaired.

The results also indicated that if no cognitive task was performed, a healthy individual’s gait pattern was not statistically different when wearing and not wearing the goggles.

“We found that we needed to examine a person’s physical and mental capabilities at the same time to see a change in gait and detect impairment,” said Bing. “It’s easy for a person to concentrate on one task, but when that person has to multitask we can begin to discriminate between someone who is impaired and someone who is not.”

In the future, the researchers plan to collect additional data from healthy individuals of different heights and weights, and from individuals exhibiting concussion symptoms according to neuropsychological screening tests performed at a hospital. They also plan to reduce the size of the system so that it becomes more practical to use.

“For the military, we envision the system could fit into a tough box so that commanders can have it in the field,” added Bing. “They could simply press a button, connect the radar system to a laptop, and an easy-to-use interface would display the results and tell them whether their soldier is exhibiting signs of a concussion.”

Approval from the Food and Drug Administration will be required before this system can be used to diagnose concussions.