More needs to be done to understand Hitler’s infamous autobiographical manifesto “Mein Kampf” to avoid a resurgence of anti-Semitism when its copyright expires in 2016, according to a holocaust historian.

Dr Jean-Marc Dreyfus, from The University of Manchester, says not enough is known about the book which preaches hatred against Jews, and why it is still popular in some parts of the world.

E-book sales of “Mein Kampf”, which gives a racist account of world history, have made the top spot on Amazon’s propaganda and political psychology chart and entered the top 20 bestselling iTunes politics and events titles. 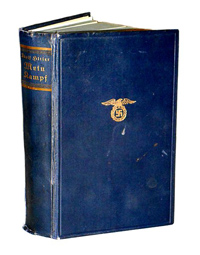 According Dr Atreyee Sen, a social anthropologist also from the University, the book, first published in 1923, is a common addition to the bookshelves of Indians across all classes.

It is studied, she says, by Indian MBA students, admired by Hindu nationalist political leaders and one of the biggest selling books in the country.

Dr Dreyfus is debating the issues with an international panel of experts – including Dr Sen – at a special workshop on today (February 7) at The University of Manchester.

He said: “Though the apparent popularity of “Mein Kampf is shocking, we should not conclude that it reflects a rise in anti-Semitism.

“But the fact of the matter is, there’s not enough research out there for us to really know what is going on and how likely it is that Mein Kampf will create more hatred when its copyright runs out.

“What we do know is that when it became an official state publication in 1933, it became a best seller in Germany. If it happened then, who’s to say what would happen now?

“This debate will start the conversation we all need to have about balancing the need for free speech against the effects of preaching hatred.”

Dr Dreyfus is against a ban on the book once its copyright – currently held by the German state of Bavaria – expires.

He is critical of the recent decision by the Bavarian State Government to stop the publication of an annotated edition of the book.

And he is also part of a campaign which argues that all copies published in the EU should be prefaced with a warning that it contains hate material – a current requirement in France, where it sells about 3,000 copies a year.