A Look Back and Ahead at Greenland’s Changing Climate

Over the past two decades, ice loss from the Greenland Ice Sheet increased four-fold contributing to one-quarter of global sea level rise. However, the chain of events and physical processes that contributed to it has remained elusive. One likely trigger for the speed up and retreat of glaciers that contributed to this ice loss is ocean warming.

A review paper by physical oceanographers Fiamma Straneo at Woods Hole Oceanographic Institution (WHOI) and Patrick Heimbach at MIT published in Nature explains what scientists have learned from their research on and around Greenland over the past 20 years and describes the measurements and technology needed to continue to move the science forward.

The Greenland Ice Sheet is a 1.7 million-square-kilometer, 2-mile thick layer of ice that covers Greenland. At its edge, glaciers that drain the ice sheet plunge into coastal fjords that are over 600 meters deep – thus exposing the ice sheet edges to contact with the ocean. The waters of the North Atlantic Ocean, which surround southern Greenland, are presently the warmest they have been in the past 100 years. This warming is due to natural climate variability and human induced climate change, and climate models project that it will keep getting warmer. Therefore, it is important to understand if the present ocean warming has contributed to ice loss from the Greenland Ice Sheet and how future warming may result in even more ice loss. 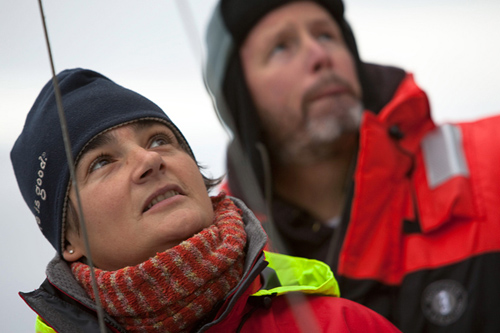 WHOI physical oceanographer Fiamma Straneo recently published a review paper in Nature that describes some of the mechanisms behind the melting of the Greenland Ice Sheet, which has increased four-fold contributing to one-quarter of global sea level rise. (Photo by Nick Cobbing, © Greenpeace International)

The paper describes the mechanisms causing the melting of the ice sheet, particularly at its margin, where the glaciers extend into the ocean. This so-called “submarine melting” has increased as the ocean and atmosphere have warmed over the past two decades.

“What a lot of research around Greenland and the fjords has shown is that if the North Atlantic Ocean warms, then these warm waters will rapidly reach the fjords and hence the margins of Greenland’s glaciers,” says Straneo.

But scientists today know that the situation is more complex than just “a warmer ocean melts ice.”

A warmer atmosphere is resulting in increased surface melting above the ice sheet, and this runoff too enhances submarine melting. Surface melt water falls through cracks in the glacier creating a freshwater river that rushes out into the ocean at the base of the glacier, sometimes 600 meters (1,800 feet) below sea level. This river mixes rapidly with the dense, salty seawater, contributing to the heat transfer from the ocean to the ice, resulting in even more submarine melting beneath the sea surface. 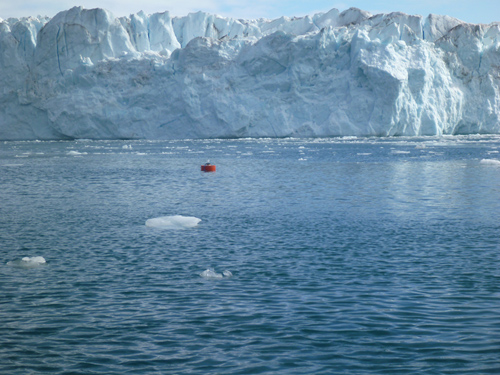 Straneo describes it as follows: “If you put an ice cube in a glass of water and don’t touch it, it will take a few minutes to melt. But if you stir it, you are making it easier for the warmer water to reach the ice surface, which makes the ice melt faster.”

Typically, oceanographers have mostly been concerned about anomalous pulses of freshwater that come from the Arctic Ocean. But now, Greenland’s excess fresh water is reaching levels comparable to these Arctic anomalies.

“Greenland will not only affect sea level rise, but it could also start to impact climate by changing the ocean circulation with the addition of so much fresh water in the North Atlantic,” Straneo says.

Due to the lack of hard data from measurements, many questions remain such as how fast will the ice sheet melt and how much mass will be lost.

Although oceanographers like Straneo have been studying the sub-polar North Atlantic for more than 20 years, they began with very little historical data from the ocean around Greenland. The same is true for the ice sheet itself. Prior to the onset of satellites about 20-30 years ago, observations of glaciers are very scarce and scientists have mostly relied on a limited number of historical photos to infer glacial retreat over time.

“Part of what we struggled with, in understanding how the ocean can affect the glaciers, was there were hardly any measurements of ocean conditions near the glaciers before everything started changing,” says Straneo.

Even today, she says: “We have very few measurements where the ice and the ocean meet. Autonomous vehicles might help some and so may moorings deployed through the ice. It’s just that they are expensive and funding is limited.”

That’s why she believes it is important to find more resources and technology that will continue to build a longer historical record of data.

“If we don’t start collecting these measurements for longer periods of time, we’re leaving the same questions that we’re struggling with today for the next generation to answer,” she says.

To begin to address this problem, Straneo and co-author Heimbach are working with other oceanographers, climatologists, and glaciologists to identify a prioritized research agenda for collecting the needed data. Their goal is to build a long enough record that it will help predict how ocean and atmospheric changes will affect Greenland’s glaciers and how those changes in turn impact our climate, she says.

“This is the sort of legacy I would like to leave. Our investment is for the future generation of oceanographers,” she says.